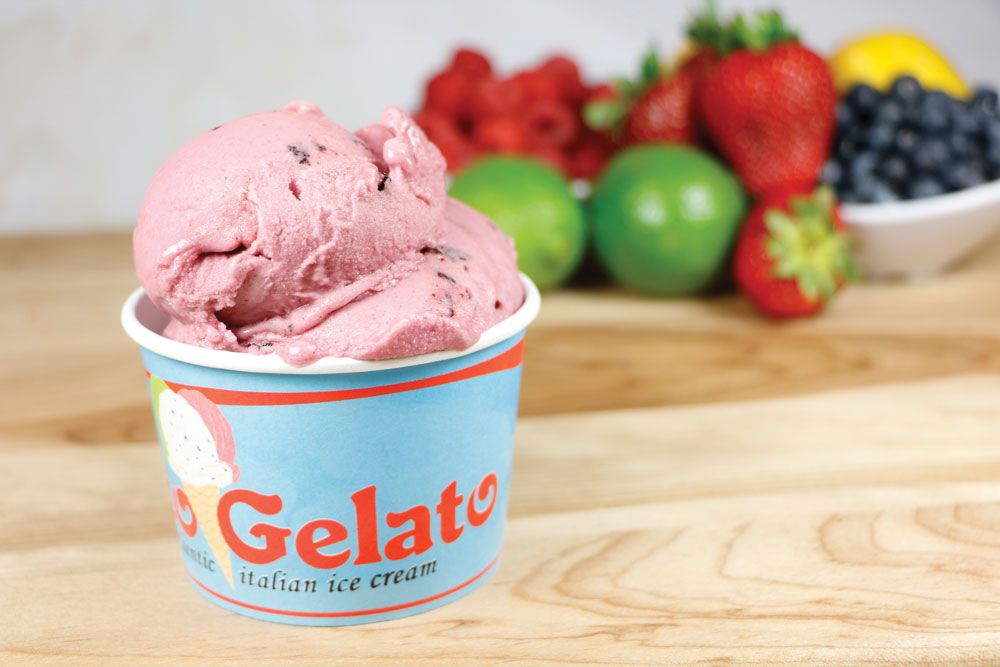 Looking for a way to help your customers beat the heat this season while fanning the flames of your profits? Look no further than frozen desserts. They make for an irresistible pairing with pizza: shareable, family-friendly, and endlessly customizable. Even better, they help add incremental sales that can significantly boost your bottom line. From creative recipes and create-your-own options to in-store sampling and drool-worthy presentation, read on to get the scoop on the latest trends in the category, plus expert tips for sweet success!

“Fancy milkshakes” are all the rage—like the decadent creations at Black Tap Craft Burgers & Beer in New York. This concept’s shakes are eminently Insta-worthy, decked out with over-the-top ingredients like pretzel rods, cotton candy and a Funfetti cake slice. Sal & Mookie’s New York Pizza & Ice Cream Joint, with two locations in Mississippi, has also tapped into the craze with its Cereal Box Shakes. Inspired by early-morning staff who arrived with breakfast-in-a-box in tow, the company’s Jackson restaurant offers five cereal-inspired shakes, such as the Cinnamon Toast Crunch Shake, with caramel sauce and Cinnamon Toast Crunch pieces swirled into cinnamon ice cream, and the Cotton Candy Shake, cotton candy ice cream with sprinkles and cotton candy on top. “We finish by putting pieces of the cereal on top,” says Susan Farris, Sal & Mookie’s marketing manager. “When you drink up the milk at the bottom of the cereal bowl—that’s just what it tastes like!” Due to customer demand, the pizzeria plans to add booze-boosted adult versions, too.

“Super-premium” ice cream is on the rise and may gain traction in pizzerias, according to Malcolm Stogo, president and CEO of Ice Cream University and Malcolm Stogo Inc. in West Orange, New Jersey. According to the International Dairy Foods Association, super-premium ice cream has an ultra-low overrun (that is, a very small amount of air and a very dense texture) and is made with the highest-quality ingredients. Depending on your concept, that can mean anything from Häagen-Dazs or Ben & Jerry’s to local artisanal offerings.

Try This: If you already sell a lot of vegan pies, consider adding dairy-free ice cream options to your menu. 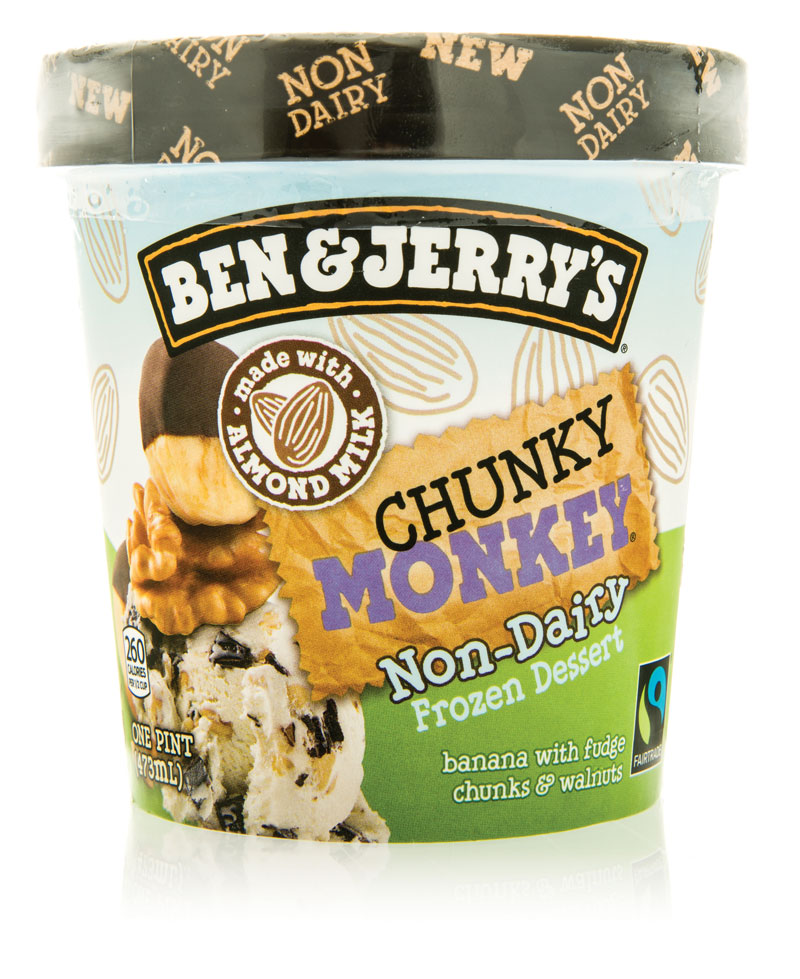 Dairy-free ice cream is also “becoming really popular because of the millennial lifestyle, lactose intolerance and vegan diets,” Stogo says. If your shop already does brisk business with vegan pies, dairy-free could be the ideal addition to the menu. And, as manufacturers look to meet the dietary needs of customers, the taste of dairy-free options has vastly improved. “It’s like night and day,” Stogo says. “Years ago, they used to be soy-based; today, most are made with coconut, almond or cashew.”

“For a pizzeria that has seating, gelato can be a great choice,” Stogo says. “Pizza and gelato go hand in hand.” Whatever varieties you choose, it’s a good idea to switch things up. Grotto Pizza, based in Rehoboth Beach, Delaware, with 20 locations, started offering gelato in the mid-2000s, choosing first a local provider—but the addition was such a smash success the small producer couldn’t keep up with demand. Now, thanks to a major supplier, sales have increased every year since, as each location offers between six and 15 rotating flavors at a time. Grotto offers three sizes—one-, two-, or three-scoop cups and cones—for dine-in or takeout, as well as pints to go. Naturally fat-free sorbets also grab space in Grotto’s display cases.

Try This: Use free sampling to tempt customers into ordering desserts. But, due to dietary sensitivities, don’t give freebies to kids without asking their parents first.

To every dessert, there is a season. “We might bring in seasonal flavors around the fall, like pumpkin or apple pie, which is great to keep interest among our longtime customers,” says Vinnie DiNatale, director of marketing for Grotto Pizza. “And, as new flavors get introduced, we replace the flavors that don’t sell as well.” Last year, Whitey’s Ice Cream, which serves the Quad Cities region of Illinois and Iowa, released four spring flavors, including Honeycomb Crunch (vanilla ice cream with chocolate Honeycomb cereal pieces and a caramel swirl), Mango Raspberry, Peaches and Caramel, and Pistachio, Almond and Pineapple.

Some dessert flavors never get old. Classics like chocolate, vanilla, salted caramel and biscotti are the four top sellers at Grotto Pizza, DiNatale says. “Kids love our birthday cake and mint chocolate chip flavors,” he adds. Grotto’s supplier is also working on a new creation for this year: Cookie Monster Crunch, with a bright blue base, plus chocolate cookie and chocolate chip bits. It’s expected to be a big hit with kids, who are drawn by colorful creations.

In addition to chocolate and vanilla, some flavors prove perennially popular at Sal & Mookie’s, including brightly hued options like birthday cake and Scooper Hero, which is vanilla ice cream painted in kid-friendly red, yellow and blue hues. “Some flavors switch out with the seasons, especially fruit flavors like passion fruit or mango,” Farris says. “That constant rotation allows you to see what works and what doesn’t, but we’re always experimenting.”

Mass-produced Italian ices—long a staple of pizzerias—are decreasing in popularity as sophisticated modern consumers seek higher-quality, better-for-you alternatives to their old favorites, according to Stogo. But that hasn’t stopped Famous Ben’s Pizza, with two New York locations, from offering flavors like Crème a Lotto, Mango, Tutti Frutti and Pina Colada. 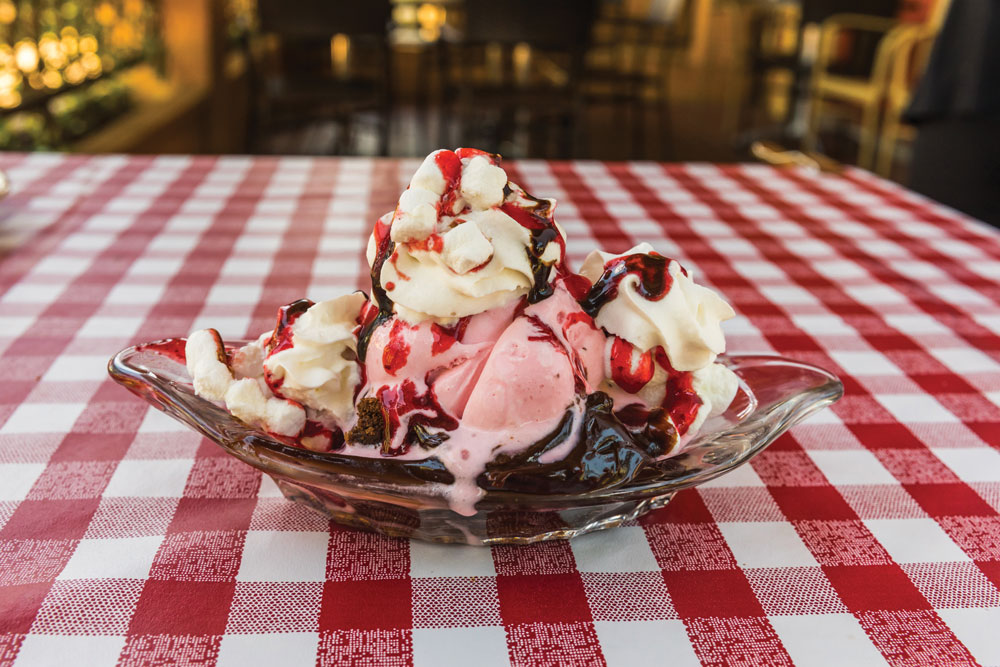 Marketing: The Rules of Seduction

Marketing your frozen desserts is key—both through traditional tactics and amazing presentation. Since many health-conscious customers feel like they’re already treating themselves by eating pizza, dessert can be a tougher sell. That’s where the art of marketing seduction comes in.

In its display cases, Grotto ensures its gelatos are sculpted just so to convey maximum eye appeal, then scattered with toppings to convey the flavor, such as pistachio bits or fresh strawberries. Sal & Mookie’s also attracts eyeballs by housing a full ice cream shop in the middle of its restaurant, offering a wide variety of frozen desserts. With 24 rotating flavors, customers can order by the scoop or pint, or select from a long list of shakes, floats, sundaes, malts, and more. And, because the brightly lit scoop shop never fails to entice kiddie interest, the pizzeria places small stools for them to view their choices. “We take cereal boxes and line them in the back for a bright, colorful display,” Farris says. “We also have colorful pictures of the treats we can make, posted on the walls all around the scoop shop. We really focus on the visuals. And we do invite people, as long as it’s not too crowded, to stand and watch their ice cream or shake being made, and we talk to the kids and tell them what we’re doing.”

Suggestive selling and free samples are keys to Grotto’s gelato sales success. “If people are looking at the case or are on the fence and don’t know which flavor to try, our staff will say, ‘I’ll get you a sample of each,’” DiNatale explains. “After one bite, if you’re in the mood for dessert, you’re going to get the full order. It’s a great way to close the sale.” For kids, employees ask parents if sampling is allowed, in case of dietary sensitivities, and the area is prepped with small spoons and mini trash cans. Servers are also trained to approach anyone at the display case and ask what flavor they’d like to try. And at Grotto, parents get a free scoop of gelato on Mother’s Day and Father’s Day.

Grotto shows off its gelatos on menus and table tents, while Sal & Mookie’s periodically distributes flyers to spread the word about its desserts, especially for new menu additions. The latter also holds server contests to encourage recommendations, with prizes for top sellers, and promotes via social media. “We have great media partnerships with local magazines and other digital media, like local websites and podcasts,” Farris adds. “We use them to help get the word out and get excited about new items.”

Rule 4: Be Kind to the Kids

Make sure to include desserts in your party and catering program. A popular option with kids is the build-your-own ice cream party, charging a set amount per child or setting up a buffet for youngsters to get the full “Ice Cream Joint” experience. Sal & Mookie’s best-selling dessert treat is the create-your-own scoop in a cone or cup, topped with any combo of candies, sauces, cookies and other add-ons. “It’s really fun, because we have all of the topping jars lined up on the counter, and the kids want everything!” Farris says. “And, for any dessert that goes out in a glass, we’ll line the glass with chocolate or strawberry sauce in a pretty pattern before adding the dessert, then add a fun swirl of whipped cream or brightly colored pieces of candy or fruit on top to make sure it looks great.”