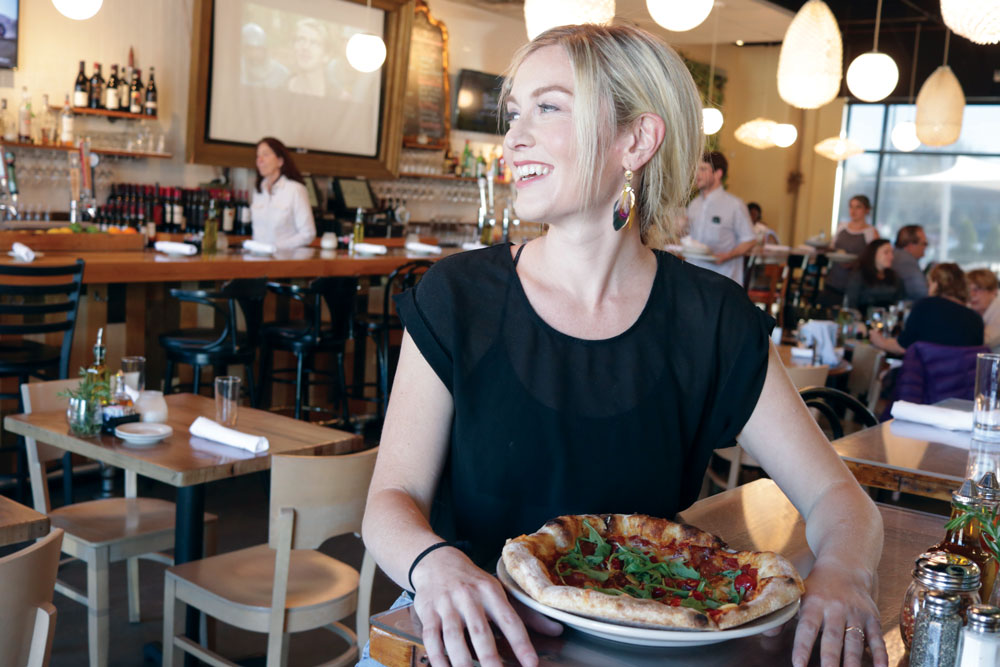 Katie Collier could be a Food Network celebrity if she wanted to be—she just doesn’t want to be. With her extraordinary kitchen skills, warm personality and marketing smarts, Collier, the co-owner and culinary mastermind behind Katie’s Pizza & Pasta Osteria in St. Louis, knows how to get her name—and face—out there. Whether she’s whipping up a batch of Burrata Fig Crostini with hometown TV comedian Eric Christensen on STL Up Late, gracing the covers of regional magazines, or starring in her own From Scratch With Katie series of online cooking videos, Collier has been radiating sheer star power for years.

But she’s a businesswoman and a restaurateur first—she’d rather keep making amazing food, opening restaurants and doing it all her own way. “I’ve been on a few competition shows,” says Collier, relaxing in her 81-seat Rock Hill, Missouri, restaurant on a chilly, early spring afternoon. “I did The Next Great Burger for the Esquire Network. I did really well, and I enjoyed it, but that’s not what I want to do. I get asked to be on Chopped or Guy’s Grocery Games. I don’t want to do that. I want to produce and own my own content and be able to share and connect with people.”

Collier, in other words, is no pizza kitchen diva. But she is something of an unstoppable force, a driven, laser- focused entrepreneur who does pretty much everything right—and, if she has her way, she may be coming to a city near you soon.

Innovation as a Way of Life

Don’t let her youthful, telegenic looks and sunny demeanor fool you; Collier is no restaurant newbie. She has worked in the business since she was 13, hosting, bussing tables and washing dishes. She founded her first restaurant, Katie’s Pizza, with her father when she was 24. She describes it as St. Louis’ first artisan pizza shop—and there wasn’t a smidgen of Provel cheese in sight. “We were the first to put squash blossoms on a pizza, the first to use prosciutto and burrata and all of these different cheeses and seasonal ingredients,” Collier says. “A lot of people didn’t know what these ingredients were 10 years ago. You’d get questions, and you had to educate.”

But innovation has been a way of life for Collier. She grew up in a family of artists and discovered Italian cooking while her mom was running Washington University’s Study Abroad program for the Fine Arts in Florence. “I came back with a mission to open an Italian restaurant, and I wanted to start with pizza,” she says. “I didn’t go to culinary school. I was a novice cook, and I didn’t know how complex pizza was, so it seemed like something I could tackle. I wanted to bring those specialty regional ingredients and cheeses and techniques home and put them into artisan pizza. So that’s what I did.”

Unfortunately, Collier didn’t have any ownership in Katie’s Pizza, and she and her husband, artist and businessman Ted Collier, decided to execute her next concept her way. After raising some initial funding from a Kickstarter campaign—mostly to generate publicity and community support—and building a group of community investors who felt a sense of ownership in the project, they opened Katie’s Pizza & Pasta Osteria in 2013. From the wood-fired oven and kitchen layout to the antique hardwood furnishings and the outdoor patio (which seats an additional 70 guests), the couple had a highly specific vision for the new eatery, which they described in their Kickstarter campaign as “cutting-edge, urban chic with a nod to mom-and-pop warmth.”

But customers don’t stand in line for two hours—a typical busy-night wait at Katie’s Pizza & Pasta—for the atmosphere alone. Collier makes all of her pastas in-house, from beet-dyed paccheri to hand-rolled strozzapreti, along with sauces full of subtle, complex flavors meant to be savored like a summer’s day in Tuscany. Guests swoon over her one-of-a-kind, tulip-shaped fiori, which comes tossed with peppery arugula and a spicy arrabiata sauce, and her signature Black Spaghetti, injected with squid ink and served with prawns, scallops, clams and caviar. The pizzas are no less feastworthy, including the Fig & Squash, made with roasted butternut squash, Black Mission figs, pancetta, arugula, goat cheese, sage and a balsamic drizzle, and the Brussels Sprout, topped with Brussels sprout leaves, pancetta, pine nuts and Fontina cheese and dressed with a sweet, ambrosial vincotto.

Collier dreams up all of the recipes herself (right down to signature bar drinks like the Tito’s Vodka-based Strawberry Demure and several seasonal Watermelon Cocktails), while a chef de cuisine carries out the menu. Like any respectable pizzaiola in the foodie age, Collier shops around for local, in-season produce whenever possible and even grows her own squash blossoms, herbs, tomatoes and other ingredients in a patio garden in front of the restaurant. Her cured meats come from a St. Louis neighborhood called The Hill that’s famous for its Italian-American salumerias and restaurants. “The menu is completely me,” Collier says. “I love to research and study and discover new things, and I have a really good sense of how things should come together, the story they should tell, the plating, all of that.”

“If you want to do 1,000 people a day in an 81-seat restaurant, you’ve got to spend some money to get them in here. Word-of-mouth can only go so far. I promise you, video works, but you have to be passionate about what you’re doing and believe in the content you’re putting out there.”
—Katie Collier, Katie’s Pizza & Pasta Osteria

Telling Her Story Her Way

Collier also has a really good sense of how to market and promote a restaurant. Although both of her pizzerias have gotten great word-of-mouth, she knows better than to rely on buzz alone. Working with a local marketing agency, Collier tells her story her way, using every medium available, from a splashy, elegantly designed website to high-quality photography on Instagram that reflects Collier’s own bright, warm esthetic. Her Give Back Tuesday events, held monthly for local causes dear to her heart, have become major events, raising $110,000 for charities to date and drawing more than 1,000 applications a year. She makes frequent appearances on local TV morning shows and won’t hesitate to pick up the phone and ask to be a guest. “Sometimes, you just have to call and say, ‘Hey, I’ve got this restaurant and I’d love to come on and share my food,’ and you’d be surprised how many times they’ll say, ‘Sounds good!’”

Perhaps the crowning touch is her online cooking series, From Scratch With Katie, a polished, fast-paced blend of stand-and-stir instructional videos and Food Network-style extended pieces that feature hometown celebrities and culinary tastemakers, including a colorful family of women from the TV show Resale Royalty, Sugarfire Smoke House chef Mike Johnson, and David Chol of Seoul Taco. “We brought in local people with big personalities and other chefs to cook with us,” Collier says. “Some chefs come in and share their theories of cooking with me. Others don’t know anything about cooking, and I get to teach them. We know we have to put our own content out there to express our brand in our way so people will get our personality and see who we are.”

More recently, Collier has developed a series of instructional videos that will accompany her innovative new line of Vero Pasta meal kits, which can be ordered online and prepared at home. (See sidebar Another Way to Deliver) She posts her videos all over the Internet, including Katie’s Pizza & Pasta channels on YouTube and Vimeo as well as Instagram, Twitter and Facebook. “A lot of our videos on Facebook will get between 30,000 and 90,000 views,” she says. “On YouTube, the average is 10,000 to 20,000, with some getting up to 100,000 views.”

Producing all that video content isn’t cheap, Collier admits. “But if you want to do 1,000 people a day in an 81-seat restaurant, you’ve got to spend some money to get them in here. There’s no way for anyone to know you’re here unless you tell them. Word-of-mouth can only go so far. I promise you, video works, but you have to be passionate about what you’re doing and believe in the content you’re putting out there.”

“We didn’t have a lot [growing up]. Nobody got dressed up and went out to fancy dinners in our family. I want people to feel like they don’t have to think about it when they come here—how they’re dressed, whether they’ll have to spend a lot. No matter what you’re wearing, no matter what mood you’re in, you’ll feel comfortable here.”
—Katie Collier, Katie’s Pizza & Pasta Osteria

The high quality of Collier’s video content—and her own seemingly effortless and gracious presence in front of the camera—makes Katie’s Pizza & Pasta Osteria look like a larger company than it is. But that’s all part of the plan. A second location, this one in nearby Town and Country, Missouri, should open this summer. From there, Collier has national ambitions, though not in the sense of a traditional franchise operation. Instead of opening a string of cookie-cutter stores around Missouri, she plans to quickly jump state lines and look next at far-flung cities like San Diego, Denver, Nashville and Phoenix. “This is our life, so I want to go to places where we can experience beautiful scenery and all the things we love,” she says. “We don’t want to saturate the local market. Then it just feels like it’s a corporation, a chain, and you lose some of that authenticity. We just want one or two restaurants in multiple cities.”

Collier already has systems in place for duplicating the Katie’s operation as well as an experienced partner, a former Panera Bread executive who helped take that chain from 500 to 1,500 stores, to guide them as they expand. “He’s part of our team, and we have managers that have worked for huge restaurant groups and handled expansions in other cities,” Collier says. But that doesn’t mean she won’t keep innovating along the way. “When you don’t limit yourself to other people’s standards or worry about what’s normal for everyone else, that’s when you start doing big things,” she notes.

And Collier will keep doing big things with people she knows she can trust. She has stocked her staff with family members—her mother is the general manager, one of her brothers is a manager, and, of course, her husband is a partner. That sense of family togetherness helps give Katie’s Pizza & Pasta Osteria a warm, relaxed vibe that has been key to the restaurant’s success. “Our personalities are built into this place,” Collier says. “This is how we grew up. We were artists—we didn’t have a lot. Nobody got dressed up and went out to fancy dinners in our family. I always say I want people to feel like they don’t have to think about it when they come here—how they’re dressed, whether they’ll have to spend a lot. No matter what you’re wearing, no matter what mood you’re in, you’ll feel comfortable here.”

Check out the video to learn more about Katie’s Pizza>>Pasta!