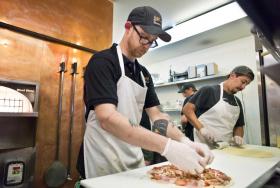 A Juneau, Alaska, pizzeria plans to use an upcoming Pizza Masters episode on The Cooking Channel to put America's 49th state on the pizza map.

Could be Island Pub's head chef David Anderson who specializes in thin-crust pizza made in wood-fired stone oven. Loyal customers call it the best pizza in all of Southeast Alaska. For the show, Anderson created a smoked salmon pizza that will be added to the menu after the episode airs. Anderson, who joined the pub when it opened 10 years ago, doesn’t use hand-tossed or thicker crusts more familiar to the East Coast, which surprised the hosts. When Kasnick finds out the show date, he plans a townwide viewing party.

Find out why The Cooking Channel considers the Island Pub an Alaskan pizza paradise.