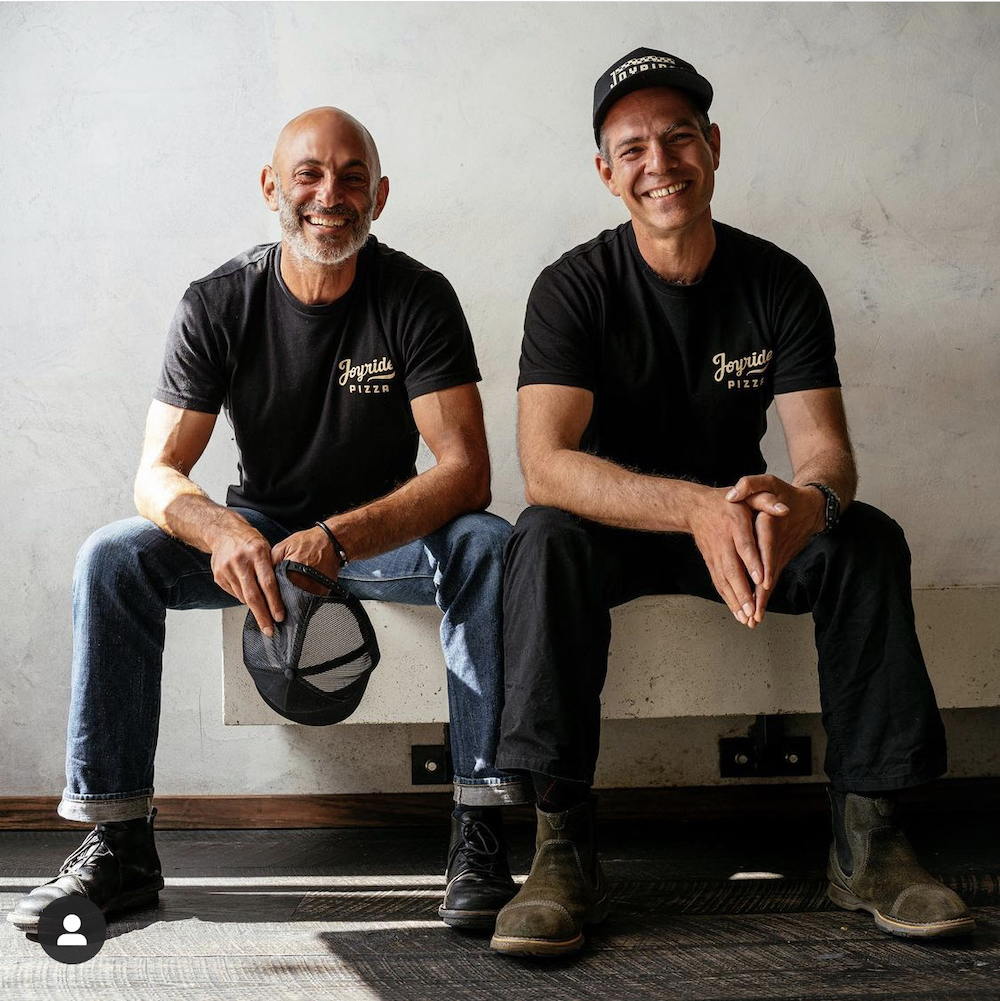 Growing up in Boston, Jesse and Joshua Jacobs lived mostly on a strict macrobiotic diet—brown rice, lentils, tofu, seaweed and the like. But when Jesse got his first bite of a real pizza at a birthday party in the 7th grade, he finally knew true gustatory joy. Now, he and his brother are delivering the same experience—in the form of Detroit-style pizza—to the San Francisco area, where they opened two eateries under the name Joyride Pizza on the same day last week.

Joyride Pizza has transformed the architecturally rich spaces—with floor-to-ceiling windows capturing the San Francisco cityscape and 49-seat outdoor dining at Yerba Buena and poured concrete and a limestone aesthetic on the urban thoroughfare of Valencia Street—into a mecca for Detroit-style pizza.

During the COVID-19 shelter-in-place in 2020, Jesse found himself tinkering around his home kitchen, keeping sourdough starters alive for bread-baking with his wife and cooking pizzas in a Detroit-style 8”x10” cooking sheet for family dinners. He had never forgotten that first childhood bite of pizza at Pino’s Pizza in Brighton, Massachusetts, and the ecstatic guilty pleasure it brought. It was quite a departure from their mother’s super-healthy homemade pizzas prepared with a quinoa cracker crust, sauce made from beets, and crumbled, fried tofu substituted for mozzarella. 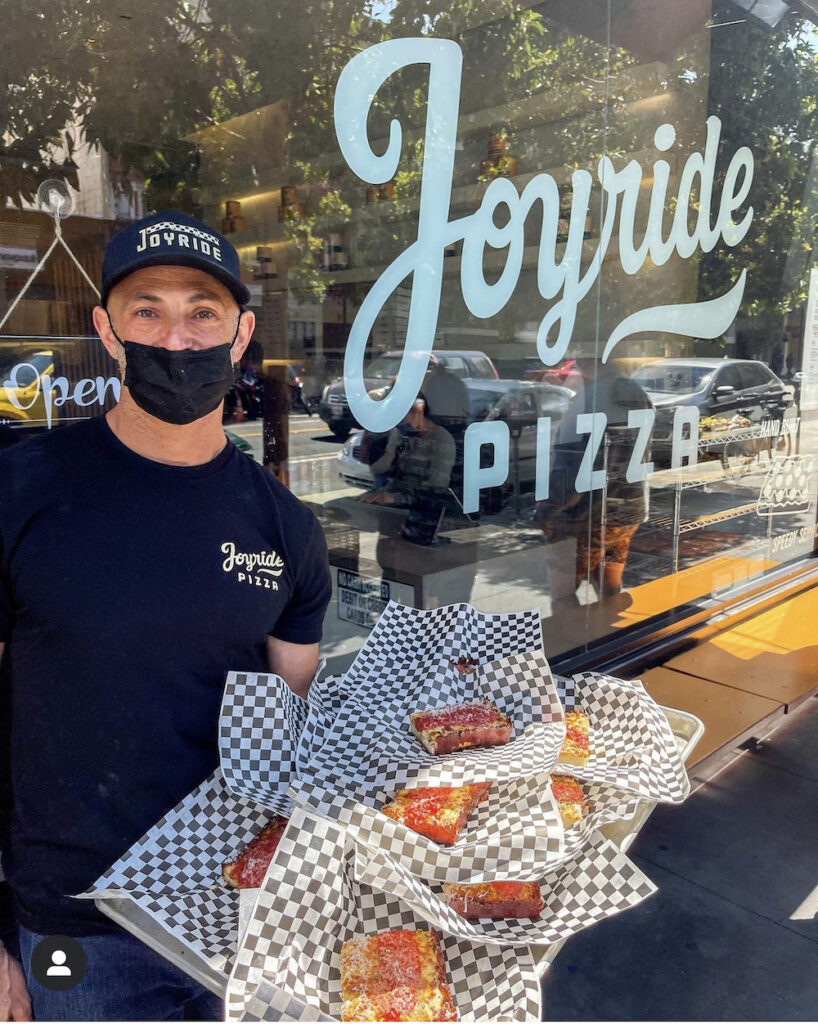 With the coronavirus on a rampage across their adopted state of California, Jesse and Joshua’s latest plans for Samovar Tea had to be shelved, and they were looking for new opportunities. “Samovar Tea was on the cusp of expansion prior to the pandemic,” he said. “I spent 20 years developing Samovar into an iconic brand. Similar to other restaurateurs across the country, COVID-19 dissolved the brick-and-mortar businesses to the point of no return. We needed to creatively adapt to the moment. Homemade pizza has brought so much joy to my family over the past year that my brother and I ultimately decided to go all-in and develop the best Detroit pizza we could imagine.”

From an early age, the Jacobs brothers had a love for Italian cuisine as a happy alternative to macrobiotic cuisine. Joshua worked as a waiter at an Italian restaurant in high school, while Jesse worked as a pasta cook, waiter and busser at various Italian restaurants in Boston’s North End and throughout New England. Though their career ambitions ultimately took Jesse to Japan (and then San Francisco) and Joshua into the East Coast tech scene, the pandemic brought them to a point of new reflection: “How can we bring the values and principles of Samovar Tea into the comfort-food space that brings people instant joy?”

Joyride Pizza was the answer. To realize their epic pizza dream, they brought in acclaimed pizzaiolo Alastair Hannmann as the culinary advisor and regional operations manager of Joyride Pizza. A close friend and former employee of 13-time World Pizza Champion Tony Gemignani, Hannmann was the master pizza maker who helped bring the vision and operations to life. Hannmann previously ran an award-winning pizza chain in Hawaii, managed production at Zume, Inc., and even helped build the world’s longest pizza in July 2017.

Meanwhile, Jesse sought out small-batch, organic purveyors in Sonoma County for as many ingredients as possible. Petaluma’s hand-selected grains from Central Milling became a staple of the focaccia dough, allowing for a sophisticated level of craftsmanship to carry on the Bay Area tradition of artisanal bread-baking. Grown in California’s Central Valley, the newly planted organic wheat strain Yecora Rojo is custom-blended for Joyride Pizza as the perfect varietal for a two-day fermentation. Higher proteins in the wheat offer greater strength in the dough for longer fermentation and yield a bubbly, delicate dough with naturally sweet and malty notes. 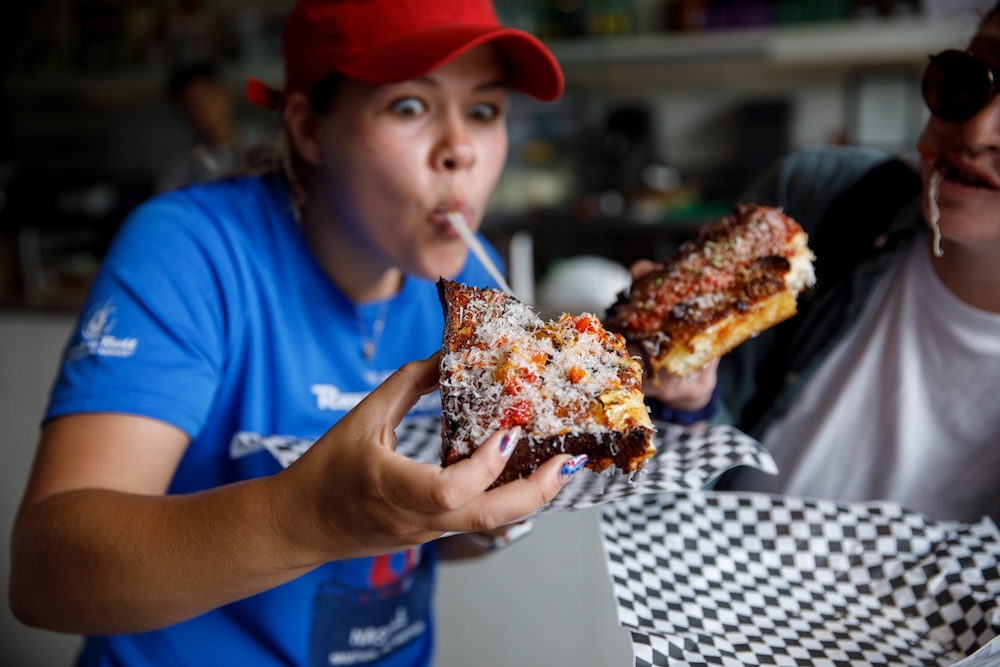 In Lodi, Joyride Pizza sources Corto Olive Oil for the focaccia dough, sauces and finishing oil. Tomatoes come from Stanislaus in Modesto. And authentic brick cheese is brought in, along with mozzarella cheese, from Buholzer Brothers in Wisconsin.

Related: Detroit-style pizzeria Via 313 in Austin gears up to conquer the west

Writing for Mission Local, Maria C. Ascarrunz sampled free slices during Joyride’s soft opening in late July. She described them as “delicious,” adding, “The synthesis of brown, crunchy edges with lacy, crispy cheese and soft and fluffy focaccia-like dough was a tantalizing and addictive oral experience.”