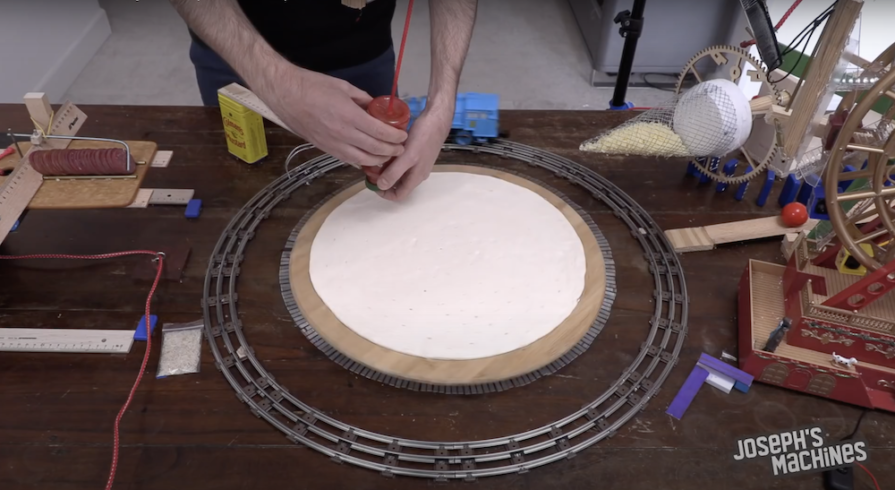 The Pizza-Making Contraption isn’t quite ready for prime time in your restaurant’s kitchen, but you have to give it points for ingenuity—and sheer visual fun.

A Rube Goldberg contraption in the truest sense of the term, the pizza-topping machine is featured on Joseph’s Machines, a popular YouTube channel with more than 1.26 million subscribers. Joseph Herscher is a kinetic artist from New Zealand who specializes in designing off-the-wall chain-reaction machines that perform various everyday tasks for people—although not necessarily any better than they can do it themselves.

The Pizza-Making Contraption is powered by a toy train that runs along a short, round track; the train pushes a lever that spins the pizza in a circle and sets other various gizmos in motion, one after another. In turn, these gizmos sauce the dough and top it with cheese, pepperoni and black olives.

The process begins with a sauce bottle that begins to swing above the dough skin, dispensing the pizza sauce in a swirling floral pattern. A mechanical arm with a comb—yes, a comb—then spreads the sauce. A cheese grater on a stick dispenses the cheese, followed by a sliding platform that adds the pepperoni as it retreats backwards.

Are the toppings placed with utmost precision around the pie? No, not really. Who cares? The machine is so much fun to watch, you won’t care what the final product looks or tastes like.

Herscher has invented many other not-so-useful machines, including one that applies makeup in under five seconds and another one that can make you a sandwich and feed it to you. In fact, keep watching through the end of the video, and you’ll see one of Herscher’s feeding machines trying, with mixed success, to hit his mouth with the pizza slice! 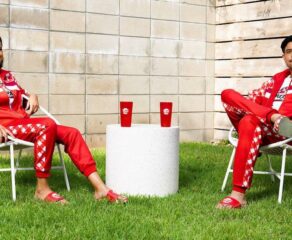