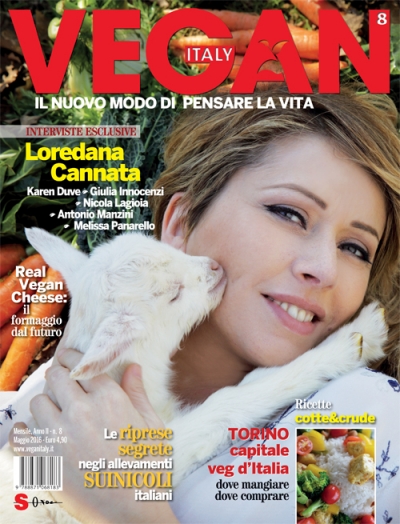 Many Italian traditional specialties come from animal products: prosciutto, mozzarella, mortadella and mascarpone, to name a few. But that’s not stopping Italians from rethinking how they consume.

Veganism in Italy is all the rage for health and environmental reasons as well as being downright fashionable. See some stylishly humane models on the cover of Vegan Italy Magazine here.

“Right now Italy has the highest interest in veganism, among the countries being studied in Europe,” reports Alessandra Fanella from CHD Expert Research Group.  Five percent of Italians recognize themselves as vegan with 11% identifying as vegetarian. These figures are high when compared to France, which comes in at 2% and 5% respectively.

Even if your knowledge of Italian is nil, the video makes a statement about how difficult it can be going vegan. The protagonist (xMurry undercover) is advised by his doctor to become vegan in order to lose weight. But he struggles immensely, fighting his cravings for traditional Italian food such as eggplant parmesan (parmigiana), pasta carbonara and spaghetti matriciana. He watches in woe as his friends eat pizza (covered in French fries)! But the most painful experience is leaving his grandmother cooking alone (also played by xMurry). As you might imagine, it doesn't end well.