Normally, Scott Anthony's Fox's Pizza Den in Punxsutawney, Pennsylvania, home of the famous groundhog Punxsutawney Phil, does around $800 in sales on a typical Wednesday. He wanted to celebrate Fox's 30th anniversary on March 7, 2001, and boost sales with a low-cost promotion. His strategy was to use his web site, which had been online less than one year, to not only promote the event, but also in the process acquire a database of customers he could target with emailed advertising.

The Calm before the Storm

Tuesday morning, March 6, he had only 50 names and email addresses in his database. By noon Wednesday, it was up to 250 and at the end of the day he had more than 500 names and email addresses he could use to email special offers to. At 4 p.m. that day, he had a line of customers that went out the door. So many orders were coming in they stopped taking orders at 5 p.m. because they feared they would run out of inventory and not be able to fill orders. They sold over 900 pizzas that night (they normally sell between 75 and 80).

Pizza operators have been trying to figure out how they can use their web site to boost sales since the Internet thing took off several years back. PMQ have always advised that operators at least have a web presence by posting directions to the store and a menu online for customers. Well, Scott has not only found a way to boost sales with his web site, but make his direct marketing efforts more efficient and cost effective, too. And it only cost him around $200.

How did he do it? 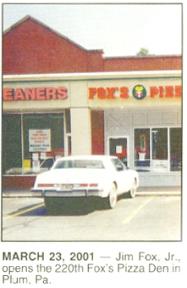 First, he decided the offer should fit the occasion. Because he was celebrating the 30th anniversary, he obtained a copy of Fox's 1970 menu and displayed it in his store. He also posted the history of Fox's Pizza on his web site and announced that customers had to go to the web site to get the special offer coupon. There, he had them fill out a form to get the coupon, which would allow them to purchase a medium cheese pizza at the 1970 price of $1.40. 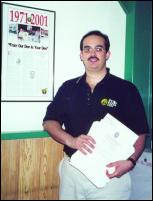 Once the form was filled out, the coupon was emailed to them at the email address they provided. He sent a press release to the local newspaper and radio station that mentioned the 1-day sale along with the store's history. The paper picked up the story and printed it and it was mentioned on the radio. He also did in-house promotions and no advertising was purchased.

CLICK HERE FOR AN EXAMPLE OF THE COUPON SCOTT EMAILED TO CUSTOMERS!

My goal is to do more direct advertising to select markets and make my direct marketing more effective and reduce some of the costs. Now that I have an accurate list of customers who are genuinely interested in my products and use the Internet, I plan to have a monthly email go to them with special offers and coupons," said Scott. "Sales going into this promotion averaged $7,722/week and the average jumped to $8,059 for the weeks following."

Scott offers advice to those who have web sites and want to use them to boost sales. He recommends that if you do run a promotional offer that is strong to have inventory well stocked to accommodate the surge. He also suggests offering a plain cheese pizza, which will entice customers to make additional topping purchases because few people want just a cheese pizza.

He said that he lost 15 to 20 cents for each cheese pizza sold at the 1970s price, but additional topping sales, publicity and word of mouth made up for the loss. This offer works best only every five or so years, such as when you have an anniversary promotion. Scott also says that the best way to keep customers coming to your web site is to make sure the site is kept fresh with new information and new offers posted as often as possible.

Successful promotions are part of what has allowed Fox's Pizza Den to open more than 220 locations in over 30 years. Here are a couple of promotions that Scott said were successful in raising the weekly sales average for his Fox's franchise:

Scott purchased two new ovens and wanted to test how well they could perform on a busy night without wrapping up a lot of his own money in the testing. He decided to have a fund-raiser for a non-profit organization that would have a "responsive group." His choice was the Chamber of Commerce's downtown beautification project since his business was located downtown and they had over 250 members.

The goal was to sell 500 pizzas between 3 and 6 p.m. The offer was for large 1-topping pizza for $5. The reward was to be a $500 donation to the Chamber's beautification project if the goal was met.

Since the general manager of the local radio station was on the chamber board, they were able to get the advertising donated. The station also did a three hour live remote and offered many prize incentives to get people to buy a pizza and help their city. The chamber sent memos and newsletters about the promotion to their 250 members. Scott enlarged his regular newspaper ad, spending an extra $20 to have it run two days prior to the promotion and used box toppers for a week prior. Chamber members sold coupon cards he had printed and also helped staff the phones for the promotion.

Scott's location achieved the goal they set for the promotion and was able to see how well his ovens performed. Scott said business leaders in the community were especially thankful, even to this day. "We gained a lot of respect and good image out of this promotion. Along with that, we gained a lot of customer loyalty," Scott says. This promotion took place in August 2000.

The Big Daddy for 8 Bucks

This was one of Scott's first successful promotions he ran in November, 1994, after he first purchased his Fox's franchise. Since hunting is one of the biggest and most popular pastimes in his area, he decided to incorporate the theme into a sale for his best-selling pizza size.

The goal was to get new customers to try his pizza. The offer was for a 21 slice Big Daddy with one topping for 8 'Bucks' (pun intended). He advertised in the local paper on the Saturday and Monday before the sale (Cost: about $50) and used box toppers.

"The first year the sale was a 'terrible' success," Scott recalls. "People waited for two hours to get their pizzas. We unplugged the phones and locked the doors early. We never thought we would get such a response. Our sales went from around $2,000/week at the end of November to around $3,000/week at the end of December."

He says that they still run the promotion as an annual event, but it's more of a customer appreciation concept now. He said they pick up several new customers with the price incentive during the 1-day sale and sell around 120 pizzas on that day. FYI