Ironman in Training: A ‘regular pizza guy’ trains to be a triathlete in South Chicago. - PMQ Pizza Magazine 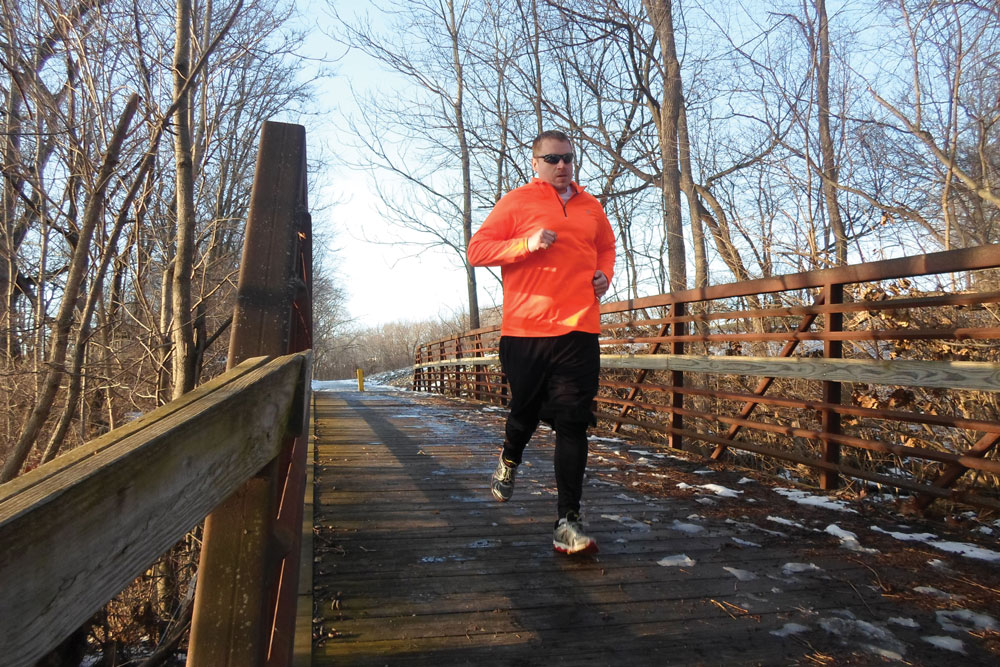 Ryan Schroeder, 33, has two great passions in his life right now: pizza and training for triathlons. Currently the marketing manager for four Papa John’s (papajohns.com) locations in the South Chicago market, Schroeder started his pizza career at age 15, washing dishes and sweeping floors in a small pizzeria, Two Friends Pizza, in his Illinois hometown of Manteno, 40 miles from the Windy City. Today, during a typical weekend workout, the triathlete-to-be journeys three hours on a bike, runs for an hour and a half, and swims for 50 minutes, getting ready for his next competitive challenge—Ironman Louisville, a late-season race held October 11 in Louisville, Kentucky.

Schroeder’s weekday workouts are shorter, but still highly intense, with alternating three- and five-mile runs and more swimming and biking on the days he doesn’t hoof it. “I’m following a pretty rigorous workout regime my brother (also a competitive runner) shared with me,” says Schroeder, who describes himself as a “regular pizza guy turned Ironman.” He adds, “Pizza has been a way of life for me since I was a teenager reading PMQ Pizza Magazine and just starting out in the business.”

A Pizzeria Owner at 18

Schroeder was still a wet-behind-the-ears, hard-working 18-year-old when his bosses offered him ownership of the Manteno pizza store. Succumbing to the stress of owning a restaurant, he soon found himself putting on weight and falling out of shape. “I didn’t know the first thing about POS or labor costs,” he concedes. “I learned everything the hard way, and one of the first things I learned is that running a pizzeria is not always conducive to a healthy lifestyle. It’s difficult to manage your time. You work a 15-hour shift, and all you have time to eat is the pizza that’s in front of you. You go to bed late, get up early, and do it all again the next day.”

Schroeder says he started out as a new pizzeria owner weighing in at a stocky 200 pounds, but he shot up to 275 in four years on the job. Not surprisingly, the physically arduous work led to severe back problems. Subsequently, the lack of mobility caused Schroeder to cut back on his daily activities, and he became trapped in what seemed like an unavoidable vicious cycle of weight gain and deteriorating physical and mental health.

But the young man loved the pizza business and didn’t want to give it up. To reduce his stress level, Schroeder eventually closed down Two Friends Pizza and transitioned into general manager positions at pizza chains in the Chicago area. During the first decade of the 2000s, Papa John’s was emerging as a strong competitor to heavyweights Pizza Hut and Domino’s. The admittedly ambitious Schroeder wanted a piece of Papa’s action, and he joined the company in 2010. Despite the demanding nature of his new gig—mega driving miles and occasional 80-hour work weeks—the athlete trapped in a big man’s body made another decision: He would start moving and get fit.

“I started working out and discovered that I enjoyed running,” he says. “At first I had no real plan—I just did anything I could, lifting weights and running. I started getting control of my weight, and even my back issues improved. In 2012, I competed in my first half marathon in Chicago. I was hooked.”

Schroeder thrived on the intense training required to prepare for competitive races. He also immediately noticed certain parallels with the pizza business. “Building a store is very similar to building your body while training for a big race,” he says. “Every bit of effort you put into it today will help you succeed in the upcoming months and years.”

After his first half marathon in Chicago, Schroeder headed to the West Coast in 2014 for his first 26.2-mile full marathon in San Francisco. He finished that race in a respectable four hours and 55 minutes and then bested that mark in the Washington D.C. Rock ’n’ Roll Marathon in March. Despite running the entire race hurdling puddles in a driving rain “that waterlogged my shoes, added 15 pounds to my running weight and threatened me with hypothermia, I finished in a time of four hours and seven minutes,” he recalls.

Finishing a competitive race, no matter what your time, is a thrilling celebration of the power of the human spirit, Schroeder says. “I want people, especially in our industry, to understand that, even while making and selling pizzas for a living, if they put their minds to it, they can truly accomplish anything. I have struggled with weight and back issues most of my life and understand how hard it is to stay on a diet. Heck, I can have free pizza every day, and I usually do. But I know the key to a healthy lifestyle is eating responsibly and exercising regularly.”

Schroeder weighed between 250 and 270 pounds for most of his life, he notes. The 6’ pizza executive now weighs in at a healthier 223 pounds and expects to trim down to about 180 by this summer. “I recently became single, and I don’t want to revert back to the bar scene,” he says. “I’m absolutely doing this to look better and be part of a training process at the same time. My life is my work. I have a huge passion for the pizza business. I want to build that same passion for the Ironman and fitness training.”

Schroeder knows that some people might consider training for and competing in a grueling ordeal like an Ironman race more akin to obsession than devotion. Participants are known to risk heat exhaustion, drowning and broken bones. But he refuses to let any headwinds slow him down. “Mostly the nonhealthy people I know think that way,” he says, candidly. “Others who try to live a healthy lifestyle themselves understand what it takes to stay fit in mind and body. I’m not obsessed. I take days off and still eat my favorite food—pizza. For me, running is that sacred place I can go to and unwind from a hard day’s work. These days, as I prepare for the Louisville Ironman, my one-hour morning swim helps me focus on the work challenges ahead.”

Schroeder is confident that he’ll someday own a Papa John’s franchise. With the experience he has gained since his days as a struggling teenage pizzeria owner, he strongly believes that the pizza industry and healthy living are mutually inclusive worlds. To build a strong foundation for his career goals, he plans to compete in two triathlons and one marathon every year. For Schroeder, not training and competing would mean returning to a reality he can’t afford to revisit. “My natural state, without exercise, is to be a heavy guy,” he says. “If I don’t race, I won’t work out, and if I don’t work out, I won’t be healthy.”