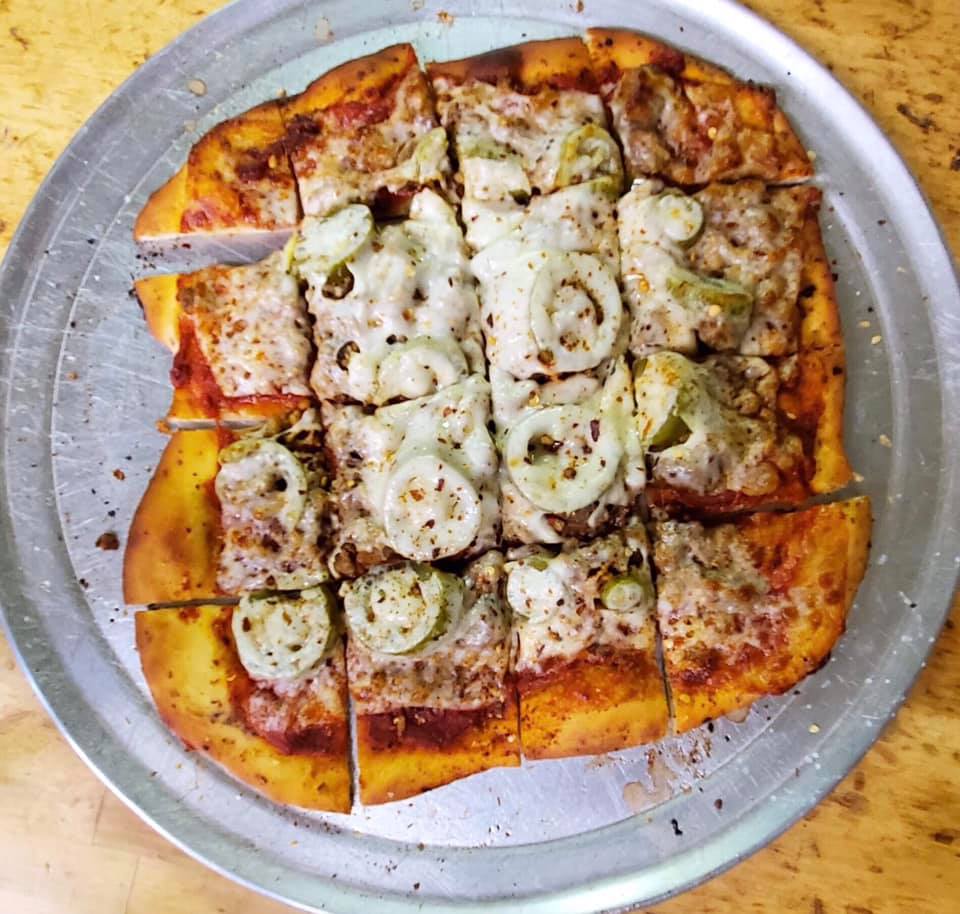 Fifteen people with beet-red faces toil and weep over a pizza in front of a crowd of 100-plus people, trying to scarf the whole thing down within 15 minutes. But this is no simple cheese pizza. It’s the Death Wish Pizza, baked by Goodie House Pizza in Sullivan, Indiana.

“Even the names of the ingredients make some folks cringe,” said Raemie Cooley, owner of Goodie House Pizza. She said she leaves the jalapeños out since the pie is already a scorcher.

So what does it taste like? Cooley said, “It’s so tasty at first bite; then about 15 seconds later it’s pure hot pain!” She decided that anyone who approaches this pizza needs to sign a waiver first.

Over 20 people signed up for the Death Wish Pizza Challenge, but only 15 were brave enough to attend. And out of those 15, just two diners finished the pie, and one man, Billy Bishop, was the winner. He credited his success to taking small bites and sips of water. Cooley rewarded both with a t-shirt and added them to the Wall of Flame.

“One of them since retired from the spice food game after encountering our evil pie,” said Cooley.

(Click on the video below for a live recording of the inaugural contest.)

Around 100 people showed up for the public spectacle and asked Cooley when the next challenge would be. Several also asked her if the Death Wish pizza could be added to the regular menu. Cooley said the pizza was invented only for special events and challenges to draw more customers to Goodie House Pizza.

The pizzeria was bought in March by Cooley, a tattooist who had been eating at the beloved restaurant since she was three.

“It’s always been my favorite pizza place since I was a kid,” Cooley said. “It’s been a staple here in the community for around 47 years. I got into the business when the owners wanted to retire. It’s always been family-owned, but I was lucky enough to be close like family to (the owners).”

She describes the pizza style as traditional Italian with an American twist. The pizzeria offers a lot of unique pies like the Big Dill Pizza (dill pickle, bacon and ham); Kitchen Sink (“everything but the kitchen sink”); Goodie Mac Cheeseburger Pizza; Double Pepperoni Attack (layers of pepperoni with ranch, garlic butter and pizza sauce); and the Cooley Special, which is pizza sauce mixed with BBQ sauce and topped any way the customer wishes. Keto Cheese Pizza is a popular order there, too. They also offer the Neapolitan Margarita pizza.