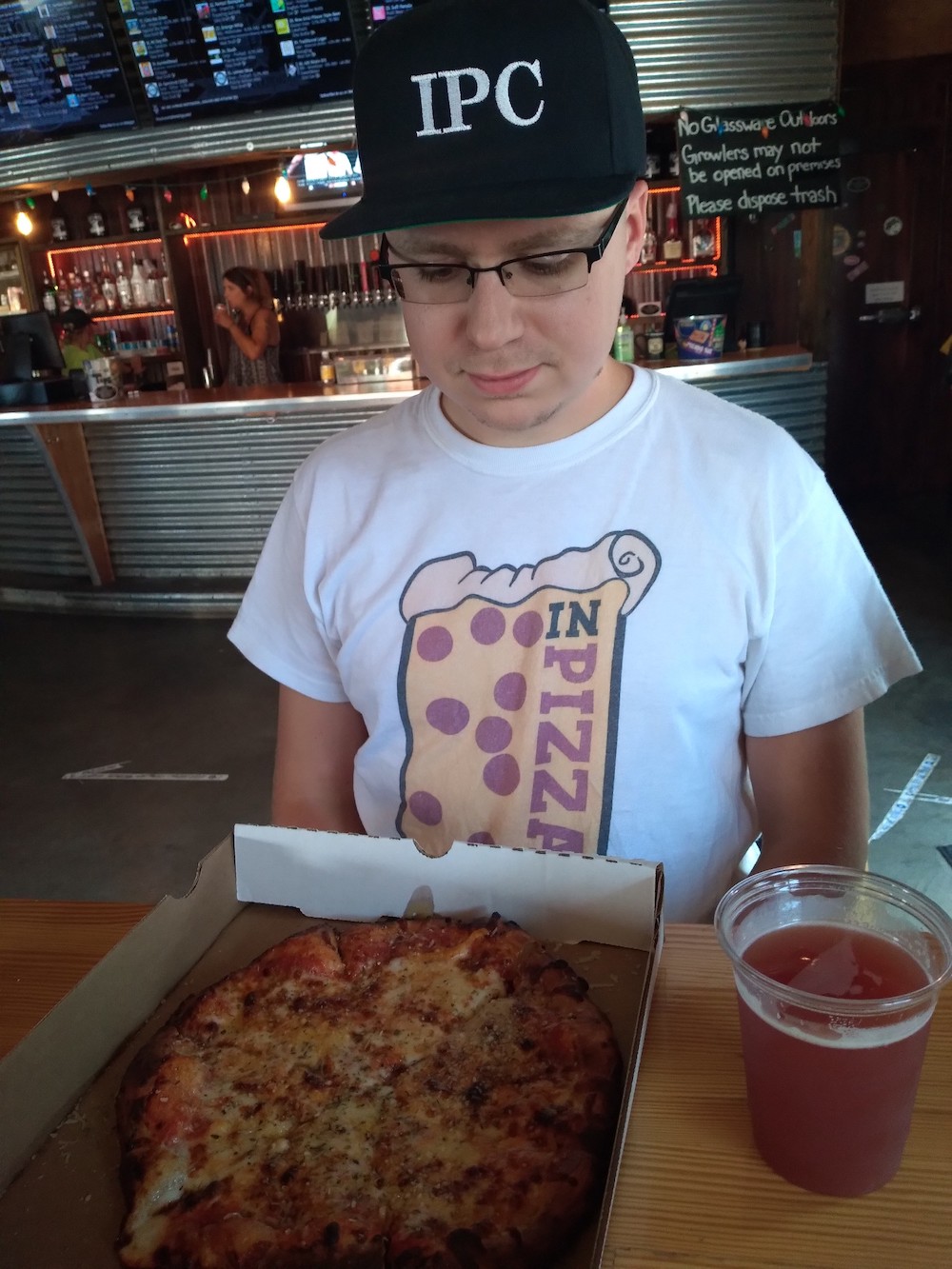 Like folks in most states, Indiana residents disagree about a lot of things, but they’re unanimous in their love for Colts football, Indiana basketball and pizza. In PMQ’s most recent Pizza Power Report, Indiana ranked 12th among the country’s Top Pizzeria States in terms of stores per capita. And that means Christian Needler, president of the Indiana Pizza Club, and his colleagues have plenty of places to go in their never-ending search for the perfect pie.

Needler and club members like Adam Todd operate a website that reviews independent pizza shops across the state while highlighting the state’s literary scene as well. (That might seem like an unusual mix, but, after all, writers and poets love pizza, too.) The Indiana Pizza Club also has a strong social media presence, particularly on Twitter, where the club has 1,168 followers. In this email interview, club founder Christian Needler tells us about the club’s origins and its mission—and, of course, answers the important question, “Hoosier your favorite pizza joint?”

PMQ: First of all, what exactly IS the Indiana Pizza Club, and what does it do? And who are your members?

Needler: The Indiana Pizza Club is a group of friends who love to eat pizza and try to spread awareness about local pizzerias while fostering friendship. We do it through several pizza-related activities such as, every summer we get together for the Indiana Pizza Tour (which we’ll discuss in more detail later), and this year we held the inaugural Pizza Games. Think the Olympics, but with pizza-themed challenges.

We had just begun doing public meet-ups to expand our membership when COVID-19 hit, but we hope to get that going again before long. Some of our members have known each other for a long time, and others are folks we’ve met online. Anyone is welcome to be a member. The only qualification is that you must love (or at least really like) pizza.

PMQ: Can you tell us a little bit about how, when and why the Indiana Pizza Club came to be?

1) I wanted to create a club that would seek out and promote local pizza instead of large chains.
2) I had a couple of drinks and bought a domain.

PMQ: Are there similar pizza clubs in other states, or are you guys unique?

Needler: There is another group in Indiana, for example, that does pizza crawls (kind of like pub crawls) on occasion. And, naturally, there are other pizza bloggers and enthusiasts. But, as far as I know, we’re the only club of our kind in any state. We’d love to connect with other similar clubs if they exist, but we haven’t heard of any.

PMQ: When I go to your website, the first thing I see is a page about a literary magazine called Genuine Gold. I understand it’s not pizza-related. So how did that get started, and why does your club produce it?

Needler: One of our members, Adam Todd, is a published poet and literature enthusiast. He wanted to start a literary magazine to highlight the poetry and prose of Hoosiers (Indiana natives/residents), using the club as a way to get the message out in order to court submissions. We were able to use our social media reach to promote the venture. The first issue is scheduled to be published before the end of the year.

PMQ: Who actually goes out and reviews the pizzerias for your website? And how do you choose the pizzerias that you review? On a city-by-city basis?


Needler: Mostly we just try to review places as we happen to try them. Any member can write up a review, and we’ll post it to the site. We definitely keep up on new pizzerias or places we haven’t visited. And we try to hit those places when we can. Lately, for example, a few Detroit-style pizzerias have popped up around Indy, and we’ve been making sure to send someone out to give those a spin.

PMQ: Tell us a bit more about the annual Indiana Pizza Tours.

Needler: We started doing these trips in 2017. Each summer we pick a city in Indiana, and several members spend the weekend there trying out local pizzerias. We rent an Airbnb, and it is just a nice way to relax and gorge ourselves on pizza.

This summer, our tour stop was New Albany, which is in southern Indiana just north of Louisville. We sampled 10 pizza places over the weekend and tried some really interesting offerings, including a pizza topped with macaroni and cheese and drizzled in sriracha sauce.

PMQ: How do you fund these trips?

Needler: The folks who attend just pay their own way. We do have a merchandise store on our website that is intended to help fund our trips.

PMQ: Are the pizzeria owners aware that you plan to review them? Or do you slip in under the radar?

Needler: Mostly we just show up and review the places without announcement. On occasion, however, we’re invited to visit locations by pizzeria owners. We’re not in the business of being hyper-critical, but we do try to provide honest reviews.

PMQ: I noticed you also interview various authors and poets on your websites. Are all of these folks Hoosiers? How do you choose them?

Needler: Usually our interview subjects have a connection to either Indiana or pizza. For example, we interviewed Carol Helstosky, even though she isn’t from Indiana, because she wrote a terrific book called “Pizza: A Global History.” And we interviewed playwright Matthew Weaver (not a Hoosier) because he’s written some plays set in pizzerias. But we also interview non-pizza folks from Indiana who are doing cool things, like beer reviewer Rick Burkhardt and film critic Christopher Lloyd. But every one of our interview subjects gets asked questions about his/her pizza preferences. That is a must!

PMQ: So tell us about the Indiana pizza scene. What do you love about it?

Needler: There is no ego to the Indiana pizza scene. You go to a New York City or a Chicago pizzeria and everyone is bragging about their local pizza and claiming to be the best. Well, we think Indiana has the best pizza in the world, but there isn’t the bluster and posturing here that I feel like you see in some other pizza scenes. That isn’t to say that those other cities and states don’t have great pizza, but Indiana pizzerias just go about their business with a workman-like approach, and you don’t hear a lot of boasting. That’s one reason this club puts so much on our site and social media. We want to act as spokespeople for the pizza scene of Indiana.

PMQ: As of December 2020, Indiana had nearly 2,000 pizzerias, or about three pizza stores for every 10,000 people, according to CHD Expert. In fact, it ranks pretty high on PMQ’s Top Pizzeria States list. Any idea why?

Needler: The thing about Indiana is that the tenderloin sandwich is widely considered the “state food,” in the same way people associate crab cakes with Maryland, for example. And it is true that pork tenderloin sandwiches are beloved here. (Our buddy Rick Garrett does a terrific job reviewing tenderloins at breadedtenderloin.wordpress.com.) But Indiana is a state with a diverse population, and one food that almost everyone from all walks of life can agree on is pizza. There is a type of pizza for every person’s preference. Hoosiers love to get together for parties and family events and to watch Colts games, and, at these social events, pizza is a terrific food to share. So I think the pizza market in this state has just figured that out, and pizzerias have popped up accordingly.

I have done my research into this and have found that, out of the 2,000-plus pizzerias, about 1,300 are independent (not large chains). The major chains are prevalent in the state, which is why we seek out the smaller, independent locations, so they can hopefully get their recognition.

PMQ: If I go on a pizza tour of Indiana, what are some can’t-miss restaurants that you would recommend?

Needler: Off the top of my head…

And that is just a start. There are so many more great pizzerias in Indiana.