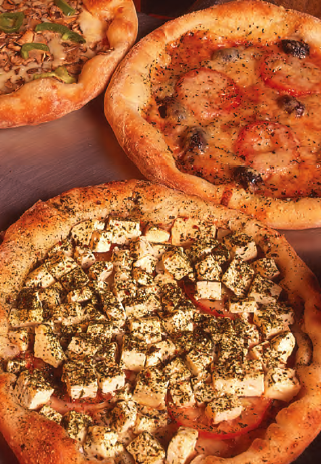 We want to start making personal pan pizzas, but we’re put off by the high cost of the pans; do you have any suggestions?

You may find a more reasonably priced alternative to buying new pans for personal-size deep-dish pizzas. Check around with your local used bakery equipment suppliers to see if they have any dark-color (the bakers call them “bake prep”) cake pans in their inventory. These will usually be available in the common 7-inch- or 8-inch-diameter sizes, which is perfect for an individually sized pan pizza. Most of the time, they will be assembled in rigid straps, with six or eight pans per strap. These can be easily cut into groups of two pans each so that you can avoid sending five or more empty pans through the oven just to bake a single pan pizza. And if you get lucky and fi nd a source of individual pans, grab all that you can get!

Remember, these will probably be steel pans, so don’t let them soak in water during cleaning any longer than necessary, and dry them as quickly as possible after washing. First wipe them dry, and then put them through the oven for one minute or so to finish drying them.

For the best deal on used pans, check your local newspaper for bakery, restaurant or consignment auctions, or search on eBay for used cake pans to see if you can find something that fits your needs without breaking the bank. Two years ago, at a garage sale, I purchased several boxes that contained nearly 100 assorted individual cake pans in 7-inch and 10-inch sizes. They were rough but easily salvageable. The seller said they were leftovers from a small bakery that the family owned many years ago, and I got all of the pans for $25. And, no, I didn’t feel guilty; that was the asking price.

We’ve been open for only about three months, but we’re already having some major problems with our dough. We can’t keep it in the cooler for more than one day, and once we bring it out and begin prepping the dough, it doesn’t last for much more than an hour. Can you tell us what we’re doing wrong?

A quick review of your dough formula tells me what you’re doing wrong. The formula itself looks good, but the problem lies with your water temperature. You’re using active dry yeast (ADY), which must be hydrated in warm water (100° to 105°F). Actually, only a small portion of the water needs to be at that temperature. About fi ve times the weight of ADY is enough warm water in which to hydrate the yeast; the remainder of the water should be sufficiently cold to give you a fi nished dough temperature of 80° to 85°F (this normally means the remainder of the water will need to be in the 60° to 75°F range).

I think the mistake occurred when someone misconstrued the directions for using ADY, which reads something like this: Put the yeast in 100° to 105°F water and allow to hydrate for 10 minutes, or until bubbles appear on the surface of the yeast suspension, and then add to the dough. Someone mistakenly thought that this meant all of the water had to be at 100° to 105°F. Oops! This resulted in a much warmer than desired finished dough temperature, which in turn was much more diffi cult to efficiently cool down in the cooler; then, after removed from the cooler, as soon as the dough began to warm, it was off and running at the fermentation races again and soon completely out of control. This underscores the point that I’ve made for years now: Temperature is the single most important aspect of dough performance and dough management. If the finished dough temperature had been monitored, you would have realized that your dough temperature was significantly higher than what you’ve probably seen in most of the published dough formulas. I’m guessing that your finished dough temperature was running in the 95° to 100°F temperature range.

What happens many times with this problem? The yeast level is reduced in hopes of getting back control of the dough. But that only leads to a finished crust that doesn’t rise properly during baking, resulting in a thin, dense texture—and sometimes even a nasty gum line—in the finished crust. It doesn’t appear that you have progressed to that point yet, because your ADY level is within the normal range of 0.5 to 0.75% of the flour weight, so all you should have to do is to adjust the water temperature, except for the small amount in which the yeast is hydrated, and things should fall nicely back into line. (If you had made reductions in the yeast level, we would have seen unusually low ADY levels, in the 0.2 to 0.3% [of the fl our weight] range. In that case, you would need to also increase the ADY level up to something closer to the 0.5 to 0.75% range as part of the corrective measures.)

Tom Lehmann is the Director of Bakery Assistance for the American Institute of Baking (AIB).