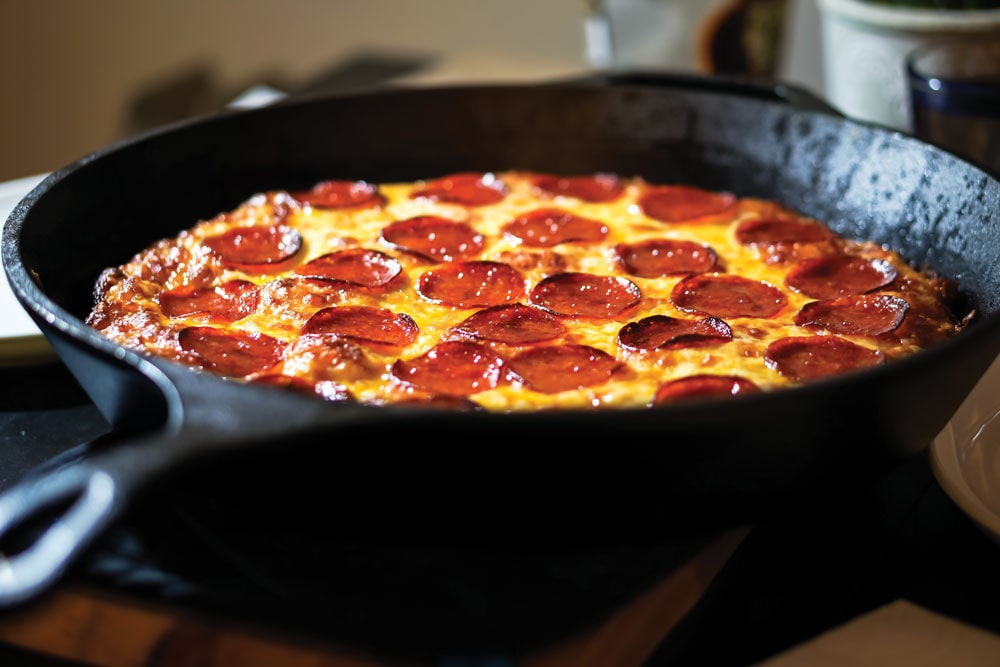 When making pan pizzas, does it make a difference which type of oil or fat is used in the pan?

This is actually a two-part question, and the short answer to both is yes. The type of oil used in the pan can impact the flavor of the finished pan pizza. I recommend using either canola or peanut oil due to both oils’ high-heat performance properties and bland flavor profiles.

When you’re looking at using oil vs. shortening in the pan, the differences will be much more pronounced. If oil is used, it can be nearly impossible to open the dough ball in the pan; the dough will just keep sliding around and won’t stay put. If you’re going to use oil, I recommend opening the dough into a skin first and then placing the dough skin in the pan. Even with that approach, after 30 or more minutes of proofing, you will most likely still need to carefully stretch the dough a bit more to get it to fully fit the pan.

There is also a major difference between how oil and shortening affect the finished crust. Shortening will lend it an outer crust characteristic that’s very similar to that of a loaf of white pan bread. With oil, on the other hand, the crust will have a distinct fried characteristic.

If your customers are sensitive to fat or object to what might be perceived as a “greasy” or “oily” pizza, you should reconsider the use of oil in the pan. The oil will get on diners’ fingers, napkins, and possibly even on the bottom of your pizza boxes after baking. Shortening, on the other hand, will give your pizza a much drier, less oily perception, regardless of the amount used. And since shortening reverts back to its original crystalline state upon cooling, the crust is never perceived as greasy or oily, even in a delivery/carryout situation.