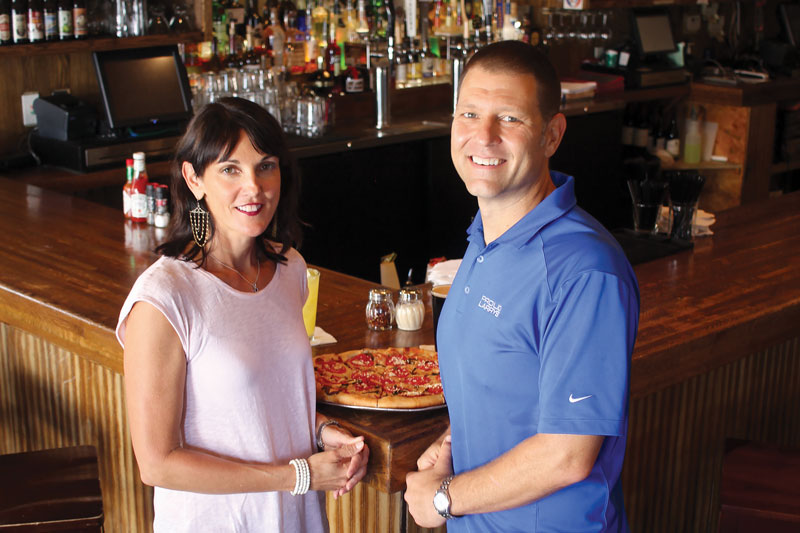 Don’t let the unassuming red-brick facade and humble patio fool you: Proud Larry’s may look like your average small-town pizza joint from the outside, but it’s a venue that has played host to musical legends. Located in Oxford, Mississippi—home of the University of Mississippi and William Faulkner—Proud Larry’s, a unique combination of restaurant, bar and music venue, has staged live shows by artists ranging from Warren Zevon and Elvis Costello to John Mayer, Modest Mouse and The Black Keys. And it has been making melodic memories—and crowd-pleasing pizzas, pastas and burgers—since 1993.

April 15, 1993, to be exact. That’s the date when Ole Miss college sweethearts Scott and Lisa Caradine turned their shared hankering for pizza by the slice and blues music into monthly rent in a former fabric and lingerie store adjacent to Oxford’s famous Square. They christened it Proud Larry’s, even though, as Lisa explains, “There is no Larry.” “The most common question we get is, ‘Where did the name come from?’” she says. Scott admits, “There’s not any big, great exciting story” behind the catchy moniker. “We looked at names like Isle of Capri and Fat Slice, but Fat Slice was already taken by a California store,” Scott adds. “Proud Larry’s was on our board as an option, and we just needed a name so we could sign the articles of incorporation.”

Did they suspect, at the time, that they were creating what would become a local institution with a national reputation? “Oh, hell, no,” Scott says. They were just a couple of youngsters with a massive learning curve ahead. “If we had known then what we know now about actually running a business, there’s no telling what we could have done.”

Scott grew up in Cajun country—Lafayette, Louisiana—and sampled delicacies from his mother’s busy kitchen. An avid cook himself, he paid his way through Ole Miss with restaurant gigs around town. Lisa, meanwhile, hails from the blues- and cotton-rich Mississippi Delta. They originally envisioned Proud Larry’s as an unpretentious college bar. But they soon realized they’d picked the perfect spot in the perfect town—Oxford still epitomizes small-town Southern life to many, while the Ole Miss football team, an also-ran in the Southeastern Conference during the early 1990s, has grown into a potential powerhouse. At the same time, Ole Miss consistently makes the grade as one of the country’s top party schools in publications like Playboy and the Princeton Review—and Proud Larry’s has helped to cement that reputation with its live-wire music scene that features both national acts and homegrown musicians looking for their big break.

From the beginning, the Caradines formed a dynamic team, with Scott handling the kitchen and booking live music and Lisa crunching the numbers. “Our goal was simple,” Scott recalls. “We thought it was a good opportunity to bring pizza by the slice, some quality beer and live music to the Square.”

The only problem: Proud Larry’s lacked a pizza oven. “We started looking for deck ovens in good shape, and we found some at a used equipment store,” Scott says. Unfortunately, the vintage ovens were mismatched. The industrious Caradines, along with their initial college-buddy business partners, had to jury-rig the ovens with cinder blocks to make them fit together.

With pizza ovens in place, the next step was perfecting their dough recipe. The Caradines took some road trips to try out pizza hotspots in New York and Chicago. “After a lot of experimentation, we came up with a thin-crust recipe infused with herbs—just to be cool,” Scott says, with a chuckle. Soon, pizza favorites like the Italian sausage, pepperoni and Canadian bacon-laden “Fat Larry” and the veggie heavyweight “Garden of Larry” were driving pizza sales. Brisk bar traffic, complemented by a thriving lineup of musical talent on the main stage, cemented Proud Larry’s reputation throughout the 1990s as the go-to party club on the flourishing half-mile circuit of commerce and entertainment known as the Oxford Square.

One of Proud Larry’s longtime customers, in fact, is PMQ’s own editor-in-chief, Rick Hynum, who recalls partying there until closing time in the 1990s. “It had and still has a vibe all its own, and the food has been consistently great for decades,” he notes. “By day, it’s family-friendly and laid-back, and by night it’s this cool, friendly, bustling nightspot for fans of live music. Scott has booked some unbelievable names over the years—everyone from Pokey LaFarge and Jason Isbell to Aaron Carter. You don’t get much more eclectic than that.”

Growing With the Town

Over time, Oxford’s booming growth, combined with Scott’s culinary heritage and the Caradines’ own growing family, began to nudge Proud Larry’s in a new direction. “Oxford was changing, and we were changing,” Lisa says. “We had two children, and we were noticing the increasing number of families and kids that were coming into the restaurant.” The expansion of the Square into a shopping and dining mecca kept pace with Ole Miss’ escalating prominence in sports and fast-growing student enrollment, boosting traffic and sales for all Square businesses. “Soon, we were mutipurposing our dough for bread and making new dough two or three times a day,” Scott recalls.

By mid-2007, the Caradines knew that the Proud Larry’s evolution from bar to family restaurant required more than a change of attitude and menus. A face-lift was in order. They renovated the place, added central air conditioning for steamy Mississippi summers, improved plumbing and expanded floor space, with an upper-deck dining area and a cozy patio outside. “The rebuild took 73 days in the middle of sweltering heat. It was brutal,” Scott admits.

The menu also needed some tweaks, so Scott expanded it to include Louisiana standards like jambalaya, shrimp and grits, and po-boys. As the demands of running a restaurant and the desire to spend more time with their two kids began to conflict, the Caradines swallowed hard and delegated. “We hired a chef—Jon Myrick—who was a Johnson and Wales graduate from the South Carolina Low Country,” Scott says. “He gets here early and stays late, and he’s a great leader of our kitchen staff. John has helped us step up our game when it comes to food.”

“We think our staying power is mostly due to our consistency. After two decades in a demanding restaurant market, we are serving some of the best food we’ve ever cooked.”
—Scott Caradine, Proud Larry’s

In a town known for its restaurants, Proud Larry’s has staked out its own culinary niche with items like The Ronzo, a dish featuring Creole-seasoned, pan-seared catfish with steamed broccoli and squash, plus fresh seafood and chicken salads, along with its widely heralded burgers and iconic pizzas. One popular special, Two for Tuesday, offers a two-for-one burger and pizza slice, attracting lines of fans that stretch out the door. No order is complete without a side of Proud Larry’s famous French fries—Scott uses only Idaho potatoes, soaks them overnight in water and double-fries them before topping them off with a special seasoning blend. And a wheat-crust veggie pizza is a newer menu option that meets customers’ demand for healthy choices and Scott’s own personal dietary needs—he developed type 2 diabetes when he was 31.

Myrick and Scott brainstorm potential new offerings at least once a week. “I’m classically trained, but what appealed to me so much with Scott and Lisa is their commitment to quality ingredients and preparation,” Myrick says. “I try to make sure that quality is reflected in every dish, from our homemade pizza dough and bread to the fresh produce that goes into our salads and pasta dishes.”

About 65% of Proud Larry’s revenue comes from food, and 35% comes from alcohol sales. A good portion of those libations are consumed during the nightly musical performances that have defined the establishment since it opened, in the days of Bill Clinton and Nirvana. From early headliners like Mayer, Zevon and The Black Keys to today’s musical newcomers with names like The Holy Ghost Electric Show, crowd-pleasing musicians have made their marks on the little stage. Scott still books all the bands himself, striving to balance local favorites and new sounds, and goes largely by his gut. “Sometimes an act doesn’t necessarily work, but it helps, when you’re talking to agents, to take on an up-and-comer so you can get the act you really want down the road. Our music program is an integral part of what we do. It has grown and kept our sales consistent, even when food sales might not be as strong.”

Lisa says the Proud Larry’s team has worked hard to find that sweet spot, where family dining and musical merriment harmonize in perfect pitch. “Proud Larry’s is unique in that respect,” she says. “It’s a juggling act to load in a band in the evening while our customers are still enjoying their meals and a glass of wine.”

But it’s an act that the Caradines have mastered over the years. When national publications and websites like Travel & Leisure, Thrillist and the Daily Meal draw up their lists of America’s best college bars, Proud Larry’s usually makes the cut. But Scott says success is about much more than being a cool watering hole for the college kids. “We think our staying power is mostly due to our consistency,” he says. “After two decades in a demanding restaurant market, we are serving some of the best food we’ve ever cooked. We’re honored to be considered an Oxford landmark. We’re a well-oiled machine heading in the right direction.”