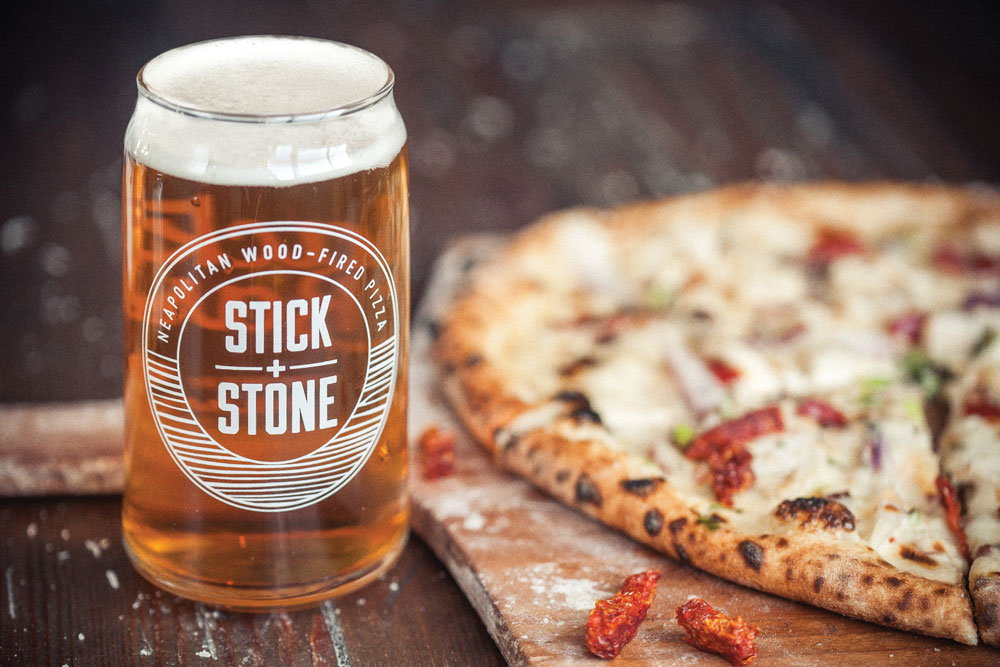 Turns out there is a cure for those famous summertime blues—and you have just the ingredients at your operation: the classic combo of cold brews and piping-hot pizzas. There’s even a bit of science behind this magical medicine, according to Jennifer Glanville, brewer and director of brewery programs for Samuel Adams in Boston. “Rich, malty flavors develop and deepen the flavors of toppings like meat and cheese, while a beer’s hop character cuts through some of the richness of pizza,” she explains. “Cheese reflects and enhances the earthy, nutty and smoky flavors of beer, which, in turn, has the carbonation and bitterness to lift the creaminess of the cheese from the palate.”

Today’s craft beer lovers pay attention to these subtleties—and, as the seasons change, their tastes change, too. Summer, in particular, brings them out in droves. In fact, when evaluating the top beer trends of 2016, Bart Watson, chief economist for the Brewers Association in Boulder, Colorado, noted that many pundits predicted summery styles as leading the charge: sessionable styles (pilsners, session IPAs and blonde/golden ales); sours (particularly sessionable sours like gose and Berliner weisse); and fruit or other infused brews (think grapefruit IPAs). Watson believes the actual trends will prove more diverse—due to the proliferation of both craft beer brewers and drinkers—but, no matter what, summertime suds-sippin’ should be a no-brainer at your pizzeria.

Moving Away From the “Dark Side”

Experts agree that summer seasonals move away from the “dark side” of winter—so, while certain customers will always choose a stout or porter, most will opt for lighter choices. “Above all, summer beers need to be refreshing and drinkable,” notes Mark Lewis, area sales manager at Specialty Beverage of Virginia in Rockville, Virginia. “Consumers want to be able to enjoy several beers outside when it’s hot. Generally, summer beers include pilsners, lagers or wheat beers.” He points to some popular national and regional varieties, all light in color and flavor profile: pilsner-style Sierra Nevada Summerfest; Bell’s Oberon, a wheat ale; golden Schlafly Summer Lager; and Otter Creek Fresh Slice, a white IPA. Other popular options, Lewis adds, may feature citrus flavor profiles, with notes of grapefruit, orange or lemon.

At Stick + Stone Pizza in Richland, Washington, owner Michael Miller finds that his Neapolitan pies are often paired with fruitier pale ales or shandy styles, such as Elysian Brewing Superfuzz Blood Orange Pale Ale and Widmer Brothers Brewing Hefe Shandy, a traditional wheat beer brewed with lemonade and served with a lemon wedge. “The zest of citrus in these two beers adds to the ‘summeriness’ of the beers, but it’s also their easy drinking and finish that make them so popular as seasonals,” Miller says. He notes common threads among the top five most popular beers in both his region and nationally: “As the weather gets hotter, most people want a lager or an ale that is a little lighter on the alcohol and heavy on the citrus notes, from either added fruit or citrusy hop profiles.”

“As the weather gets hotter, most people want a lager or an ale that is a little lighter on the alcohol and heavy on the citrus notes, from either added fruit or citrusy hop profiles.”
—Michael Miller, Stick + Stone Pizza

Of course, some operators aren’t afraid to venture off the beaten path by brewing their own special styles—a surefire way to excite even the most jaded craft beer lovers. “One of the styles my husband, Tom Baker, loves to brew is called a gruit,” says Peggy Zwerver, co-owner of Earth Bread + Brewery in Philadelphia. “It’s a medieval style that was made before brewers discovered hops, so they added whatever herbs were available to them—primarily medicinal types of herbs. In the past, he has used herbs such as wild rosemary, yarrow and bog myrtle. They yield a very interesting flavor and nose.”

If that sounds a little “out there,” keep in mind that customers are often happy to forgo the predictable in summertime. “A lot of regional and local brewers offer seasonal summertime beers, and we notice that hefeweizen and cider styles on draft do really well in summer. But there is also increasing interest in sours, which a lot of breweries are doing now,” notes David Tieman, co-owner of Five Points Pizza in Nashville, Tennessee. “Another popular style is Stiegl-Radler’s German beer brewed with grapefruit; with lower alcohol (3.2%) and a nice tartness, people can have a couple, and it appeals to those who aren’t usually big beer drinkers. Founder’s Brewing Co. Rubaeus, a raspberry beer, also sells well in summer.”

In other words, don’t underestimate the consumer demand for new and interesting styles, particularly if you’re in a hop-heavy ’hood. Brewer Stouffer, founder and owner of The Roman Candle, with four locations in Milwaukee and Madison, Wisconsin, is doubling and tripling taps at his outposts thanks to a growing base of beer buffs. “In summer, we sell more wheats—bringing in a lot more oranges for Blue Moon sales—and traditional drinkers love light pilsners, but customers are also drinking those hop-forward IPAs and pale ales,” Stouffer explains. “Now sour beers (both traditional and modern interpretations) are popular as well—and our state favorite, Spotted Cow (a farmhouse ale), is a popular summer choice because it’s a little lighter.”

The takeaway: Offer something for everyone! “The best beers will have enough flavor that you can enjoy them cold, and they’ll offer a hint of sourness or be bitter enough to be refreshing,” concludes Shelby Schneider, marketing director at Shmaltz Brewing Company in Clifton Park, New York. “If you appeal to those sensibilities, your beer will be a summer success.”

Now that you’ve assembled an awesome array of warm-weather staples, how do you make your sunny sales forecast a reality? First, consider what beer types might pair best with the lighter pies (think Margheritas or salad-topped) on your menu. Customers needn’t be pressured to pair with a specific beer style, but recommendations can help guide the less-knowledgeable toward the right selection. “Since summer beers are typically light, it’s best not to pair them with overpoweringly flavorful pizzas,” Lewis recommends. “Almost any summer beer should pair well with a classic Margherita, while some of the more robust, flavorful pizzas would pair well with a wheat beer or session IPA, which have a little more flavor and a fuller body that can stand up to the bigger flavors.”

Operators agree that spicy pies are perfect for flavor- forward styles. At Earth Bread + Brewery, Zwerver pairs a hoppy IPA with the refreshing and spicy summertime favorite Vietnam Veggie flatbread (with spicy peanut sauce, cellophane noodles, shredded carrots, bell peppers and cucumbers, then finished with chili vinaigrette, cilantro, basil and a lime wedge). The Roman Candle has paired its “sweet heat” Hot-wa-ii Pizza—featuring chipotle-infused tomato sauce, Canadian bacon and a pineapple-chipotle drizzle—with Bell’s Oberon; its fruitier bouquet complements the powerful flavors. “We always talk to beer vendors to find out what’s new, then see if we can pair it with a pizza already on our menu to give it new life,” Stouffer says. “Or we’ll take an already popular beer and craft a new pizza to pair with it.”

“We notice that hefeweizen and cider styles on draft do really well in summer. But there is also increasing interest in sours, which a lot of breweries are doing now.”
—David Tieman, Five Points Pizza

Stick + Stone has also mastered the art of the coupling, teaming its Margherita pizza with 10 Barrel Brewing Swill, which boasts a lemon zest flavor that pairs well with the pizza’s fresh basil, cuts through the mozzarella’s mellowness and refreshes the palate. Its vegetarian pie goes well with Elysian Brewing Superfuzz Blood Orange Pale Ale—both taste-wise and in sensibility. “Elysian uses a centrifuge filtration process, as opposed to animal-based filtration processes, and Elysian beers are vegan—something the vegetarian diner will appreciate,” Miller notes. “But the pizza’s robust flavors, with peppers and onions, also intertwine with the light-drinking, fruity pale ale in a perfect braid of flavor.”

Most successful brew-centric pizzerias also boost their beer programs by building relationships with local brewers. Both The Roman Candle and Stick + Stone promote their favorite regional breweries through Tap Takeover nights. “A brewmaster or representative from the visiting brewery will bring old favorites, along with a few new or limited-production beers, for Stick + Stone customers, plus a suggested pairing—and maybe even a few giveaways for beer aficionados,” Miller explains. “They have been a huge success and differentiate Stick + Stone from larger franchises.”

Finally, remember this: Your staff members facilitate guest contact, so you want to make sure they’re on board with your summertime beer menu. “When you get your staff excited about what you’re serving, they share with customers, so educate them and encourage team members to come up with new combos for pairing,” Stouffer says. “Experiment with different flavors and get excited—that will spread to your staff. And when staff is excited, your customers will follow suit.”