How to Knock Down Dominoes: Pizza Hut Takes a Swipe at its Arch-Rival in Loyalty Program Promo (With Video) - PMQ Pizza Magazine 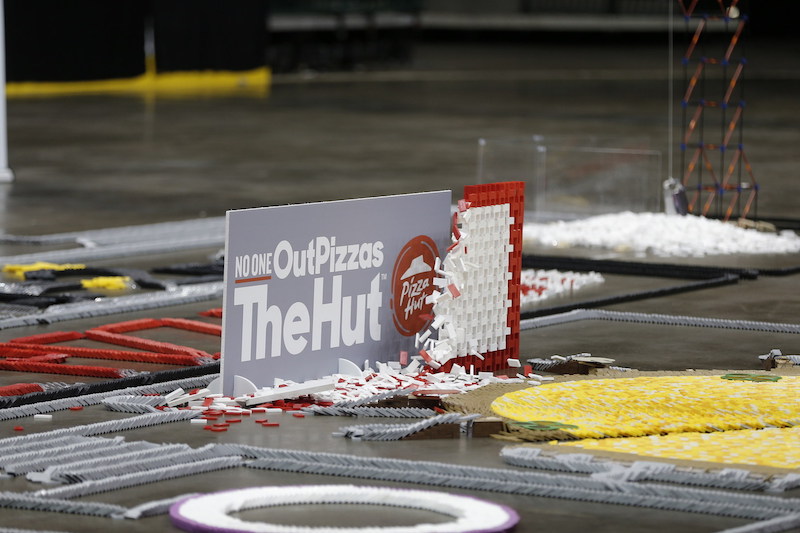 It’s no secret that the country’s No. 1 pizza chain has been struggling to retain its market share in recent years while No. 2 Domino’s enjoys a surge, thanks in large part to innovations in online ordering that make it ridiculously easy to order up a Domino’s pie from just about anywhere.

With its corporate tongue planted firmly in cheek, Pizza Hut struck back last week with a unique video that featured a world record-setting attempt to knock down the most dominoes in the shape of a pizza. In the video, the company created a sprawling, multi-patterned graphic made of dominoes, then knocked them all down, one at a time. As the dominoes fell, the designs highlighted benefits of the loyalty program, including flexible point redemption, no daily limits and the ability to earn free pizza quickly. Other domino sets formed images of pizza ingredients, such as mushrooms and onions, while one series of dominoes resembled hundreds of Pizza Hut pizza boxes.

The video was filmed at the American Airlines Center in Dallas after 13 dominoes artists, including lead designer and architect Lily Hevesh, spent more than two days building the design and testing it. It took about five minutes to topple all of the dominoes.

In an accompanying contest that runs through Thursday, August 31, viewers are invited to guess the exact number of dominoes used in the video for a chance to win free pizza for life. The first person with the correct guess will receive 312,000 points automatically deposited in his or her Hut Rewards account, equaling one pizza every other week for 60 years.

“Just like Hut Rewards offers points for every dollar spent online, every domino knocked down counts toward the world record,” Zipporah Allen, Pizza Hut US VP of marketing, said in a statement. “Setting a world record was rewarding, but offering Hut Rewards members unlimited points toward free pizza and a shot at free pizza for life is even more rewarding.”

While Domino’s has gone gangbusters with its online ordering capabilities, Pizza Hut has struggled to catch up and has reportedly become a drag on parent company Yum! Brands. Meanwhile, Papa John’s beat out Pizza Hut as the 2017 Brand of the Year for pizza chains in a Harris Poll of consumers earlier this year.

So how successful was Pizza Hut’s dominoes stunt? Judging from social media response, the video wasn’t exactly a viral sensation. From its publishing date on August 23 through August 29, the video had only earned ??? views on Youtube, with 132 likes.  On Facebook, the video garnered around 2,200 reactions, including 648 shares and 616 comments. Many of those Facebook comments, however, had nothing to do with the video or the Hut Rewards program, as customers instead vented about unpleasant Pizza Hut experiences or lack of delivery options from their local Pizza Hut franchisees. 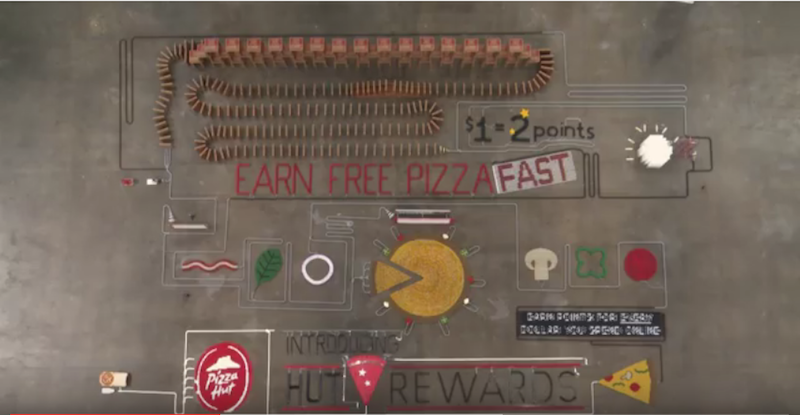