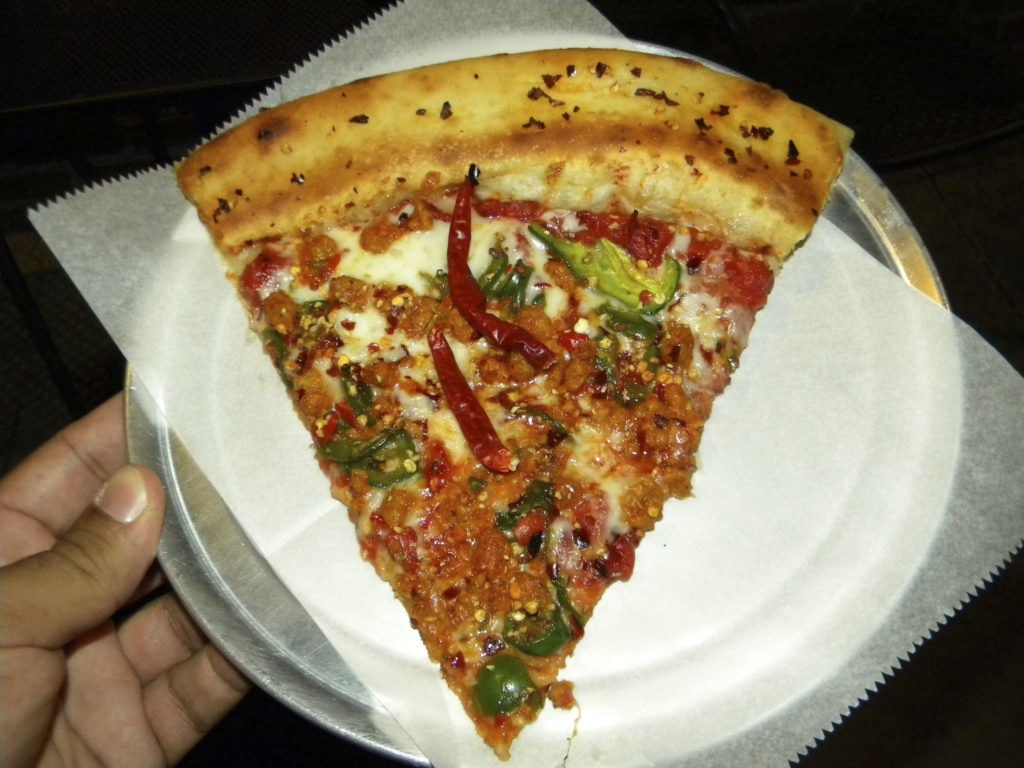 As political passions flare and the heat rises nationwide over the presidential election, it is, perhaps, only fitting that the so-called world’s hottest pizza is coming back to Mikey’s Late Night Slice.

Mikey’s, headquartered in Columbus, Ohio, announced today that the Fiery Death w/ Hate Sausage pizza will be offered for a limited time only at its Cincinnati location at 2014 Elm Street in Over-the-Rhine. Customers can order the pie from Friday, November 13, through Sunday, November 15. And they can even make their own Fiery Death at home—if they dare.

In addition to sausage, the pizza is loaded with Carolina Reaper Peppers, Trinidad Scorpion Peppers and Bhut Jolokia Ghost Peppers. In October 2019, the pie was featured in Mikey’s Fiery Punishment Contest, in which eight contestants raced to eat three slices along with a raw Carolina Reaper Pepper—and then had to stay seated for five minutes afterwards without drinking or eating anything else.

“It’s literally the hottest food I’ve ever encountered,” Biundo told PMQ last year. “It’s damn inedible, really.” He said he “literally cried” when he took his first bite of the pizza. “But let me tell you: As much as it burns going down, nothing will prepare you for how it’s going to come out.”

Biundo said there will be no eating contest for the Fiery Death w/ Hate Sausage pizza this year. But Mikey’s Columbus stores are offering meal kits featuring the pizza and will teach brand fans how to make the pie and discuss its history in a livestream on Thursday, November 12.

To buy a slice, customers are required to sign a rather wordy, detailed and hilarious waiver that Biundo developed with the help of an attorney. The waiver reads:

“IN SIGNING THIS WAIVER FORM YOU ARE ADMITTING THAT YOU ARE AN IDIOT FOR THE DAMAGE YOU WILL BE CAUSING YOUR MIND, BODY, AND SPIRIT FOR TAKING PART IN THIS TRAVESTY.

I acknowledge that eating any concentration of spicy foods that have the spicy pepper ingredients may or may not cause gastrointestinal or abdominal distress for an unknown period of time and to an unknown extent. I hereby state that I have no known or unknown health condition(s), including respiratory or cardiac illnesses, that may be aggravated by such and in case there is, Mikey’s Late Night Slice, its employees or affiliates shall not be held responsible or liable for any action in which I elect to consume any food that may or may not aggravate or cause any condition as a result of my consuming or over-consuming these spicy foods that contain Scorpion Chile, Ghost Chile, Habanero, Serrano, Cayenne, and Crushed Red Peppers and/or other spices. It has been made clear to me that highly intense spicy foods have been known to cause undesired effects such as overall discomfort, abdominal or gastrointestinal discomfort, flush, dizziness, extreme burning sensation, tearing, numbing, tingling and post-digestive discomfort on a temporary and or possibly permanent basis. Should I experience any of these effects I shall hold Mikey’s Late Night Slice, its employees or affiliates harmless for my indulgence in such and any undesired result thereafter due to any activity that includes consuming extremely spicy foods or overindulgence therein.”