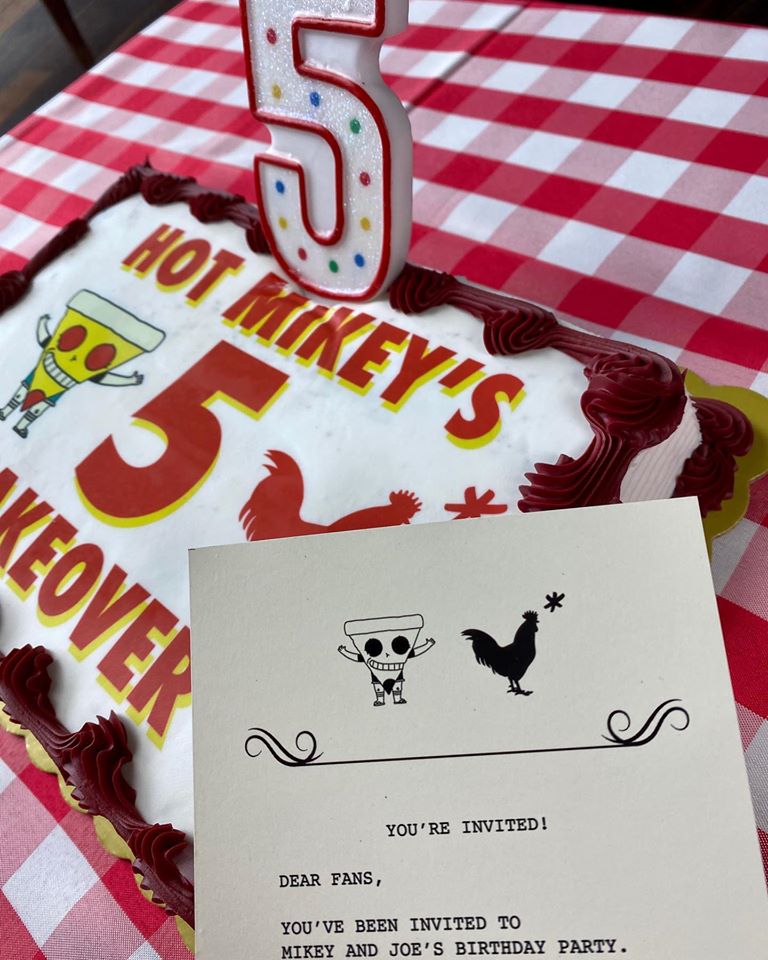 Mikey’s Late Night Slice (LNS) and Hot Chicken Takeover, both headquartered in Columbus, Ohio, are teaming up for their fifth year, bringing back a fan-favorite collaboration pizza made with HCT Nashville Style Chicken, housemade ranch dressing and pickles on an LNS pizza. The limited-time pizza special will raise funds for the Columbus Diaper Bank.

The classic Hot Mikey’s Takeover Pizza will be available at all Columbus LNS locations from Monday, February 17, through Sunday, February 23.

Meanwhile, a special vegan version of Hot Mikey’s Takeover, made with HCT’s plant-based “Not Chicken” and a plant based ranch, will be available at the LNS location at High Street and Vine Street for one day only on Sunday February 23.

As in years past, a VIP Sneak Preview Party will be held prior to the public launch. This year, the party will be held at the LNS at 268 South 4th Street location, featuring an all-you-can-eat buffet of all three versions of the Hot Mikey’s pizza, including the new vegan Not Chicken pie, as well as a fourth made at the infamous HCT “Holy” heat level. Tickets go on sale today for $25 each. Price includes all-you-can-eat pizza and sponsored drink tickets by North High Brewing. Tickets may be purchased for either a 5 p.m.-7 p.m. time slot or a 7 p.m.-9 p.m. time slot.

HCT and LNS began their collaboration in 2016 to do some good for the community and have some fun with their respective customers at the same time. “Nobody could have predicted the popularity and demand for the Nashville Hot Chicken style pizza, made with the distinctive HCT flavors on the award-winning LNS pizza crust,” the company said in a press release. “It has become an annual event that continues to grow in anticipation.”

Each year, the Hot Mikey’s Takeover collaboration has raised funds for the Columbus Diaper Bank, with a diaper for every dollar spent on the pizza going to families in need.

“We added our vegan option, Not Chicken, to the HCT menu last summer and were eager to include a plant-based version of our annual Hot Mikey’s Takeover pizza to the menu this year,” says Joe DeLoss, Hot Chicken Takeover’s founder and CEO. “We look forward to serving more guests and generating additional diapers for families in Central Ohio through our partnership with the Columbus Diaper Bank.”

Related: You have to sign a waiver to try the ‘world’s hottest pizza’ at Mikey’s Late Night Slice

“Five years is a milestone, no matter how you look at it,” adds LNS Founder Mikey Sorboro. “It’s become a tradition, and we’re thrilled that this year we literally have a Hot Mikey’s Takeover to offer just about everyone!”

Tickets to the Launch Party can be purchased at www.hotmikeystakeover2020.eventbrite.com. Social media commentary and photos will be encouraged under the hashtag #HotMikeysTakeover.