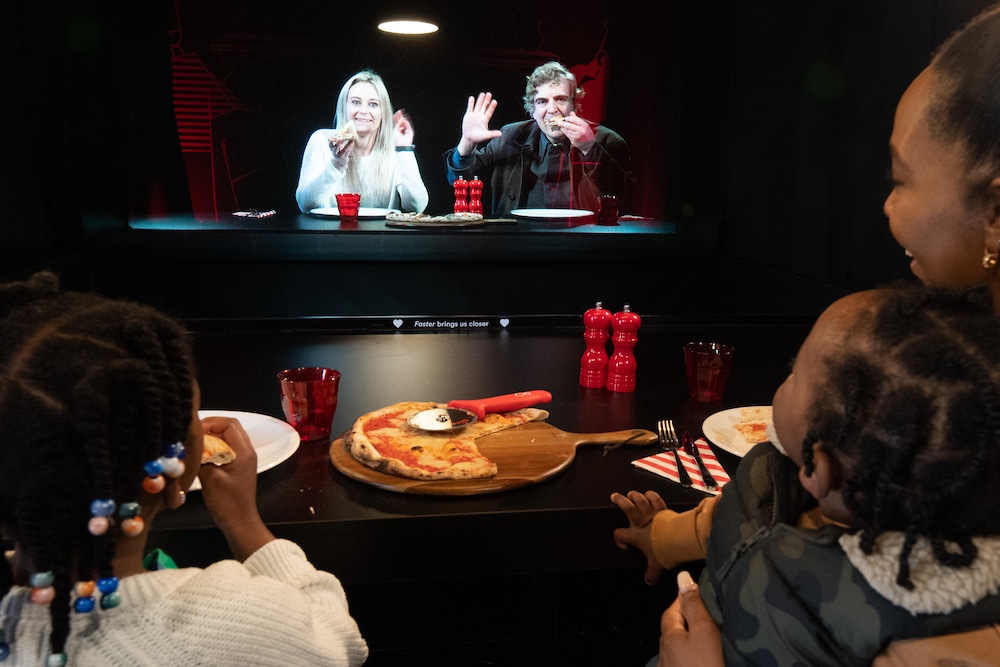 In London, Sarah Nicholas-Kyei and her children interact with a life-sized hologram of their friends, Natalie Holmes and Ian O’Connell, in Edinburgh during the Two Hearts Pizzeria dining experience.

Related: Pizza robots put to the test at Dodo Pizza in Mississippi

Look closely at the photo at the top of this page: That happy couple is not waving at you from a big-screen TV. They’re appearing in the form of a real-time, life-sized 4K hologram while chowing down on pizza and chatting with a family in another country.

The Two Hearts Pizzeria was essentially split in two, with half of it located on London’s Southbank and the other half on Edinburgh’s Castle Street. Thirty people participated in the two-day event, enjoying pies with friends via hologram on opposite sides of the UK.

Virgin Media’s holographic technology projected life-sized holograms in the dining space, allowing the participants to see, hear and talk to each other in real time, as if sitting at the same table.

According to a Virgin Media survey, 50 percent of Brits are “bored” with video calling, and 63 percent said those calls don’t provide them with the kind of interaction they’d prefer. Thirty-one percent said they would rather keep in touch via hologram, and 34 percent said the technology could keep romance alive for long-distance couples.

Hologram technology will become commonplace in UK homes by 2030, according to UK futurologist and technology forecaster Dr. James Bellini.

“Advancements in technology and lightning-speed broadband mean that pioneering forms of connectivity, such as holograms, are now viable options for when we want to feel closer to those we’re not physically able to be with,” Bellini said. “With technology moving as quickly as it is now, it wouldn’t be strange for holograms to be commonplace in UK households by the turn of the decade.”

“The pandemic has accelerated the need to stay connected online and has created an opportunity to revolutionize the way we use technology, with many permanently changing their habits and behaviors as a result,” said Virgin Media COO Jeff Dodds. “The real-time holographic technology demonstrated at the Two Hearts Pizzeria is the natural evolution of the video call, and, thanks to our gigabit network, we’re serving up a slice of the future.”