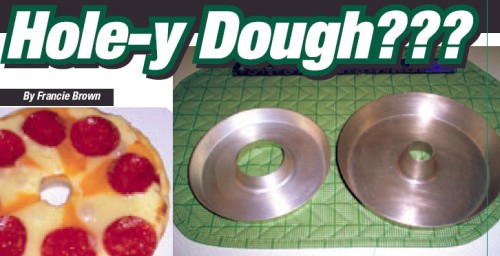 Ever wondered how to make your pizza better by the way you bake it? 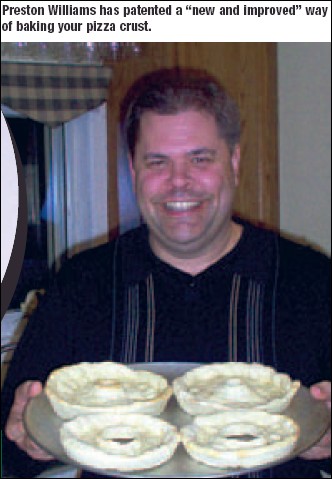 "Cutting a hole out of the center allows the dough to cook much faster and more consistently," Preston said. His patented method (yes – that's right, a U.S. patent) of making pizza requires that a hole be cut out of the center of the pie. Any hole, slot or slit in the middle of the pie without written permission violates the rules of the patent. "If a pizza has any holes in it, then it's considered a multi-edged pizza and falls under the rules of my patent," Preston told me.

"The hole doesn't have to be big. Most of the ones that I've made have been no bigger than an inch or so in diameter," Preston told me. "Depending on the size of the hole, you can put anything from dipping sauce to kids' toys in the center." Preston also recommends keeping the amount of toppings the same, just spreading them thicker on the pizza. "The best proportional size hole does make the amount of crust a customer receives about 10 percent less than in a round pizza with the same diameter," Preston said. "But when you make a square pizza with a square hole the customer gets 10 percent more pizza and it fits in the same box."

The idea for this came from a home-cooked pizza Preston was making that usually took around an hour to cook. Cutting out a hole in the dough drastically decreased the bake time. From there, he decided to patent the idea. To cut the holes out, he initially used things such as coffee cans and lids to cut out the hole and protect the inner "crust" for better hand-holds on the pizza. Eventually, he had pans made with a "volcano" in the middle to bake the pizza (think flat bundt pan).

Preston, who has worked at a Domino's in the past, hasn't decided on a name for his pizza, but says that he is thinking of letting anyone who wants to make his pizza do so for one cent a pizza or $10 a month – whichever is more. Preston can be reached at preston-williams@mn.rr.com.