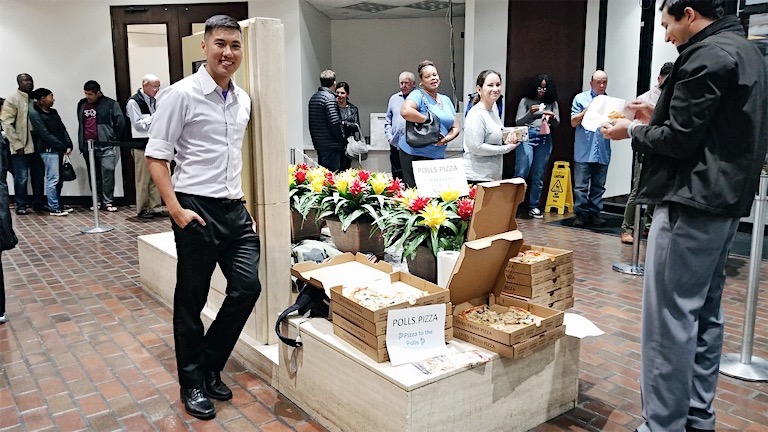 With relatively high turnout at the voting polls today, people who are having to wait in line have good incentive to stick it out: the possibility of free pizza.

Thanks to the nonpartisan nonprofit Pizza to the Polls, voters at locations around the country have been feasting on free pies while they wait to perform their civic duty. The organization, founded by a group of three friends, says it has thus far raised more than $326,000 in 2018 and sent 7,117 pizzas to 438 polling places in 41 states.

Via Pizza to the Polls’ website or social media, voters can send a report of a long line at a polling place. Once Pizza to the Polls verifies the location, it sends pizzas there, using the Slice app to find the closest pizza restaurant and place orders. Once a pie arrives, anyone can grab a slice, including poll workers, volunteers and voters’ children.

Supporters from around the country make donations at the Pizza to the Polls website to keep the pies coming. A $20 donation buys one pizza. Two hundred bucks pays for 10 pies. The pizzas usually feature a mix of toppings and might include gluten-free crusts when possible.

The organization’s Twitter page has been tweeting all day about locations that have been served, from Atlanta to Grand Rapids, Michigan, to Missoula, Montana. “We’re big fans of voting and want to make it easy and take some of the dreariness away,” Pizza to the Polls co-founder Scott Duncombe told USA Today.

Pizza to the Polls launched the initiative prior to the 2016 election, starting out small and working with a crew of volunteers from across the U.S., England and even Australia, to place the orders and coordinate delivery. In 2016, the organization raised more than $43,000 from 1,728 donors, according to its website, with more than 25,000 slices served.

The nonprofit’s website points out that partisan preferences don’t matter. “Ain’t nothing partisan about trying to make voting less of a drag,” it says.