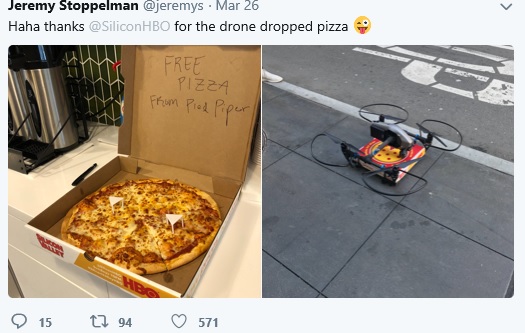 Lucky fans of HBO's Silicon Valley received pizzas delivered by drone during the Season 5 premiere thanks to a promotion that took a month to pull off, according to Eater.com.

Fooji, a company that delivers fan experiences for entertainment companies arranged to have more than 700 pizzas delivered via drone in San Francisco, New York and Los Angeles, using different pizzerias in each city, which included Pizza My Heart, Patxis, and Five Star Pizza, according to the story.

The promotion was created to go along with a fictional app, referred to in the episode, called Sliceline. Instructions from @SiliconHBO on Twitter instructed fans: "To celebrate Pied Piper's acquisition of #Sliceline, tweet #Sliceline +

to claim your free pie. Powered by @gofooji."

Talk about going all out for a promo!