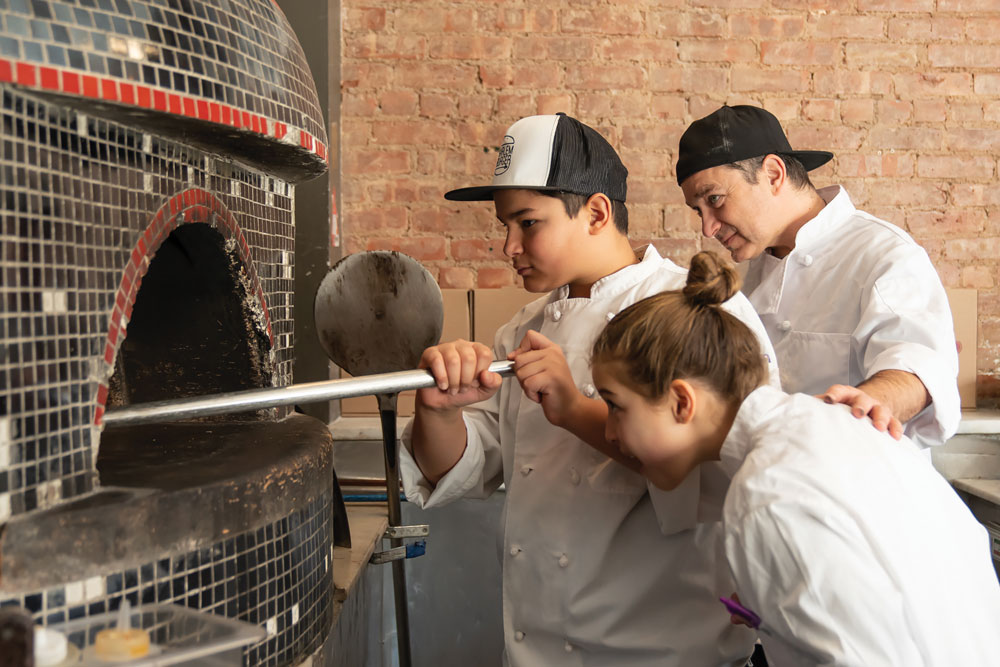 Harlem is famous for a lot of reasons. Once the stomping grounds of African American icons like Louis Armstrong, Billie Holiday and James Brown, this historic Manhattan neighborhood inspired the novels of Zora Neale Hurston and the poetry of Langston Hughes, not to mention the comedic stylings of Richard Pryor. Today, Jeannie and Alper Uyanik, founders of Harlem Pizza Co. and Sliced by Harlem Pizza Co., hope to jazz up the neighborhood yet again—this time through pizza.

At first glance, the Uyaniks might seem unlikely candidates for such a mission. Jeannie was born in Cairo, while Alper hails from Niksar, Turkey, and both worked in the high-flying worlds of international finance and event management before opening Harlem Pizza Co. in late 2014. And they admit they still have a lot to learn about the pizza business. “It was never meant to be a full-time gig,” Alper says. “It was, like, let’s do something for the neighborhood—it’ll be fun.”

Turns out it hasn’t always been that much fun—at times, it has been heartbreaking (for reasons we’ll explain shortly). But from the quality of their food to building a brand that has been embraced by nearby Columbia University, the Uyaniks are doing many things right while also doing a lot of good for a community that still struggles with poverty, crime and a storied but troubled past. 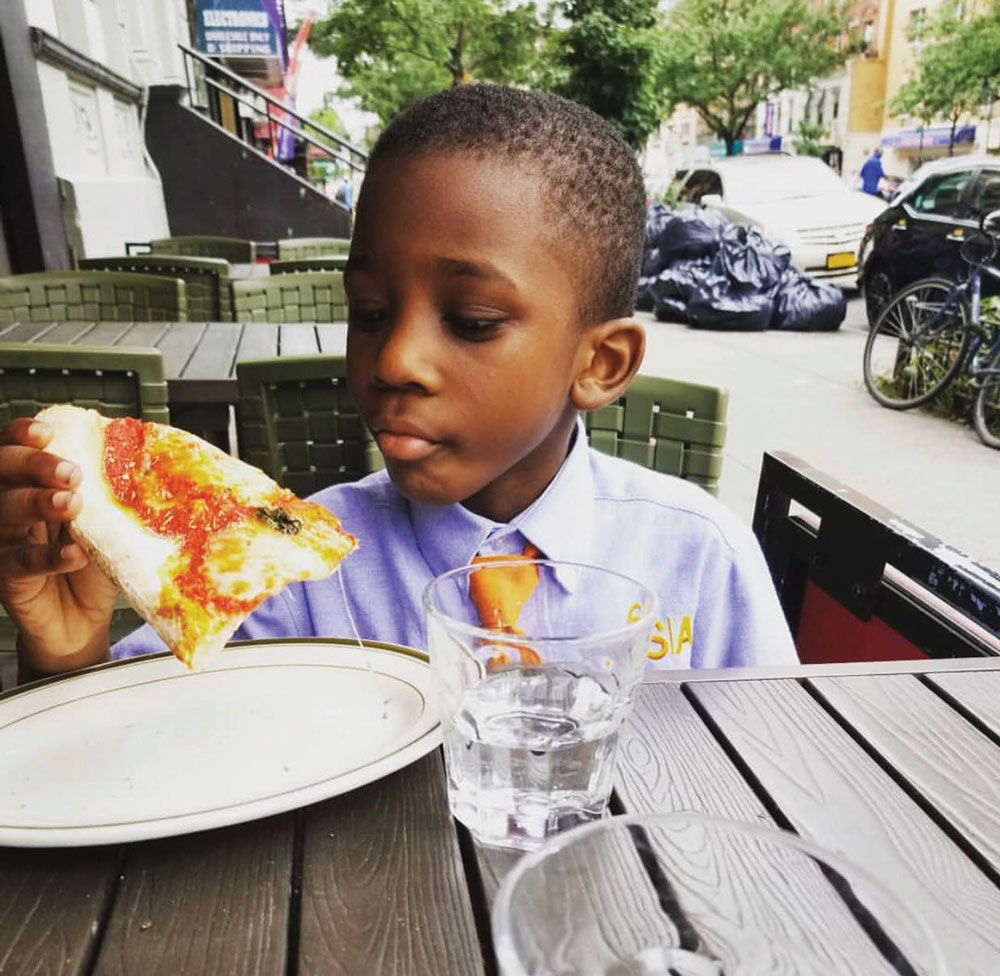 “I knew that if I wouldn’t want my own kids to eat what we’re making here, I wouldn’t feel comfortable selling it to my neighbors’ kids and the community’s kids. I have a clear conscience when they’re eating our food.”

One thing you’ll learn quickly in a chat with the Uyaniks is that they care deeply about Harlem, where they’ve lived since 2008. “When we started Harlem Pizza Co., it was for the neighborhood, by the neighbors,” Jeannie says. “Not necessarily neighbors that were reflective of all parts of Harlem, but neighbors who love this place and have called it home for years.”

Out for a walk one day in 2014, Alper noticed a shuttered storefront that had previously housed a pizzeria, complete with a wood-burning oven. The Uyaniks conferred with friends and neighbors about investing in a new restaurant; everyone agreed the neighborhood sorely needed a good pizza joint.

“At the time, I was working for Standard Bank, which had a joint venture with a Turkish entity,” Alper recalls. “Toward the end of 2014, they ended that relationship and closed the desk down here in New York, and I said, ‘Maybe this is a sign.’ I packed up my box, brought it to the pizza place, and we opened.”

Alper had previously co-owned a Manhattan restaurant, Café Soleil, in the mid-1990s, so he wasn’t new to the business. Jeannie also owns C&G New York, an international events management firm. Still, as seasoned hospitality industry veterans, they knew there was a lot they didn’t know. They needed to bring in a world-class chef, and after a couple of false starts, they found the perfect one: Jonathan Shepard, a former chef at Donatella Arpaia’s Neapolitan pizzeria, Donatella, among other acclaimed New York restaurants. “Jonathan’s background and training were in line with the kind of pizza I wanted to make and deliver,” Alper says.

As for the kind of pizza Alper wanted to offer, imagine a hybrid between Neapolitan and Roman styles. “Obviously, pizza, by nature, is a food item that’s often requested through delivery,” Alper says. “So I wanted a crust that would hold its integrity for at least a 10-block radius. The traditional Neapolitan has a very soft, more delicate dough, with the leoparding effect on the cornicione. It’s all very wet, and everything is sort of in the center. It’s delicious, but it’s meant to be consumed immediately after it comes out of the oven. Roman-style pizza is on the completely opposite end—very dry and crackly—and I didn’t want that, either.”

The product they settled on, Alper says, is “not a true Neapolitan pizza, and it’s not a Roman-style pizza. It’s a super-thin crust, and we push all of the ingredients and sauce out as close as possible to the edges so you’re getting more of a true pizza experience. We use Caputo ‘00’ flour—we switch from red to blue, depending on the season—with some semolina mixed in as well to give it that crispness.”

Recipe of the Month: Pizza Siciliano with Nutella

But pizza isn’t the only food the Uyaniks offer to their fellow Harlemites. Recognizing the need for a top-quality artisan hamburger in the neighborhood, they opened Harlem Burger Co. in June 2016. “I think this speaks to the fortuitous nature of the growth of this brand and the stars aligning just right,” Jeannie says. “We live in Harlem, and right across the street is Harlem Burger Co., while Harlem Pizza Co. is a little further east.”

After launching two different restaurants under the same brand in less than two years, the Uyaniks had plenty to keep them busy. But as their culinary fame spread, opportunity kept knocking. In the spring of 2018, they opened Sliced by Harlem Pizza Co. on Amsterdam Avenue—with some prodding by nearby Columbia University. The Ivy League school’s campus encompasses a huge chunk of New York real estate that includes numerous privately owned storefronts. “They approached us in 2017 about an available spot that had been a pizza place for the last 20 years, until the operator up and left all of a sudden,” Alper recalls. “They chose us over eight or more big names in New York to take over the space.”

Although the Uyaniks hadn’t been looking to expand, they couldn’t pass up the opportunity. Upon taking over that 800-square-foot store, they inherited its deck oven, which called for a different pizza making approach. Hence, Sliced by Harlem Pizza Co. offers New York-style slices and 18” pies.

For the Sliced concept, they use minimally processed, nonbromated, unbleached flour from a New Jersey mill. Organic, locally sourced ingredients aren’t a must in New York, Alper says, but high quality definitely is. “I figured we didn’t need to start out at 100. Why not start at 40 or 50 and then slowly go up the curve?” he says. They also opted for local cheese from 5th Cioffi Italian Cheese, a fifth-generation Italian cheesemaker founded in Brooklyn with a facility in New Jersey. Meanwhile, they source sustainable, vegetarian-fed, humanely grown beef for Harlem Burger Co. from Niman Ranch in San Francisco and buy their buns from a local baker. “When we first started Harlem Pizza Co., I knew that if I wouldn’t want my own kids to eat what we’re making here, I wouldn’t feel comfortable selling it to my neighbors’ kids and the community’s kids,” Alper says. “I have a clear conscience when they’re eating our food.”

Related: Return to the Planet of the Apps to increase your pizzeria’s online ordering sales 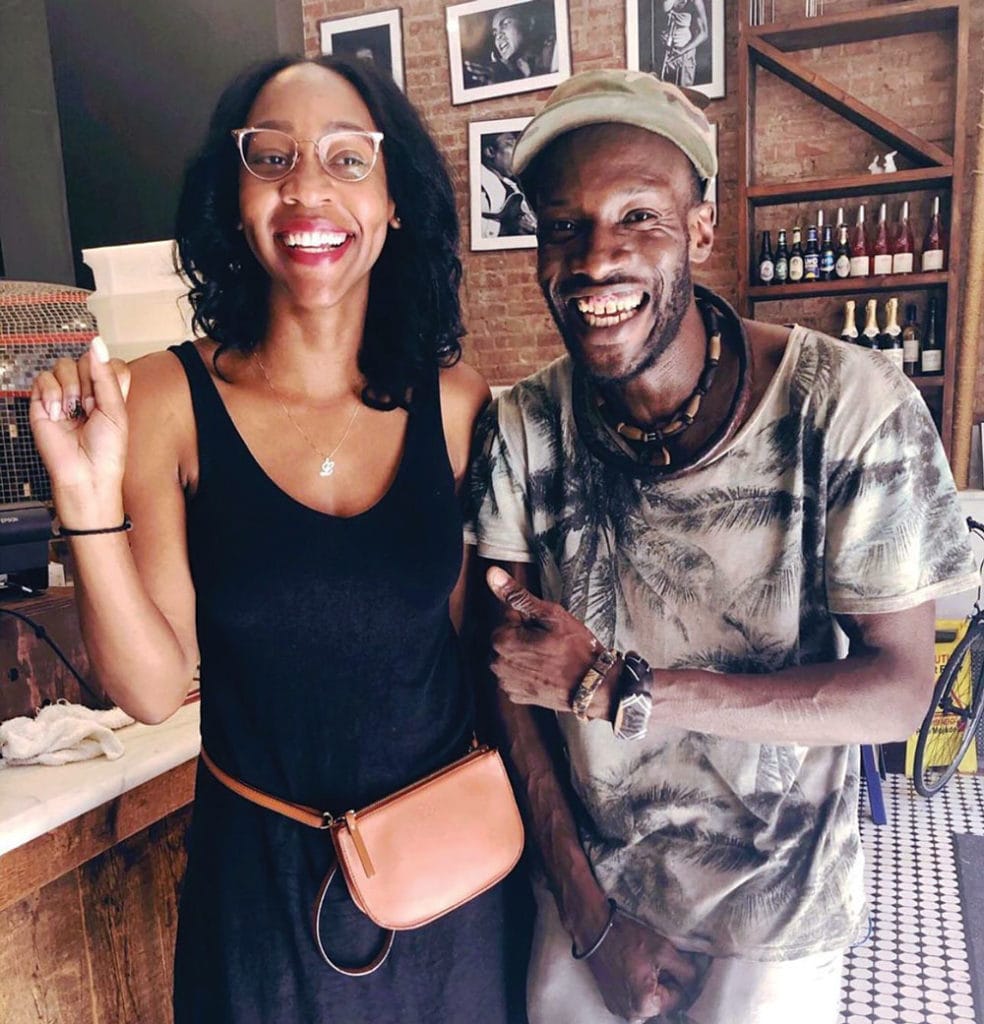 As Much Heartbreak as Joy

Having a clear conscience is a pretty big deal to the Uyaniks. As dedicated Harlemites, they weren’t out to make a quick buck. Almost from the start, they committed to working with several area nonprofits, such as the Doe Fund, Getting Out and Staying Out (GOSO) and the Women’s Prison Association (WPA), to provide jobs for formerly incarcerated locals. “I’ve always believed we should give back,” Jeannie says. “It should be as simple as brushing your teeth in the morning. Helping someone in need should be an item on your daily checklist.”

Unfortunately, it’s not that simple, as Jeannie admits. Gentrification has certainly changed Harlem in recent years, and the neighborhood is no longer predominantly African American. “You have so many subsets of this vibrant area of New York, people who have been here for generations, recent West African immigrants and the European community, who embraced Harlem as it was transitioning to its current state,” Jeannie says. “There’s a lot of diversity in culture and feeling, but it also feels like a neighborhood.”

Yet prosperity has left many pockets of Harlem untouched. Its poverty rate still exceeds 20%, and crime remains a serious problem. “It has been eye-opening to see the challenges that people and their families go through with incarceration and the toll it takes,” Jeannie says. “When it’s the male in the family who has been incarcerated, most of the women don’t have transportation of their own and lose their jobs while trying to support the family. Then they might feel they have to resort to things that are not exactly above-aboard [to bring in money], so the cycle is perpetuated.”

The lack of employment opportunities for ex-offenders makes a return to crime seem like their only recourse. But organizations like the WPA teach formerly incarcerated women job skills that can lead to future employment in foodservice. “A lot of people see [restaurant work] as a stepping stone, but the female candidates from WPA are looking to create careers,” Jeannie says. “There are so few pizzaiolas. Can you imagine if we could do that for women, if they can leave us and get better jobs? That would be unbelievable!”

But hiring ex-offenders brings its share of woes—employee theft, chronic no-shows, recidivism. “It’s hard to create positive change when they’ve experienced so much hurt and pain and loss,” Jeannie says. “We’ve had some great success stories, but for every two, we’ve had 10 go awry. We had one employee who stole a lot even while we were loaning him money. He was a great line cook. If he put half the energy into bettering his life as he devoted to stealing, he would have been great.”

The Uyaniks know they can only do so much to break the cycle. “There has been as much heartbreak as great joy,” Jeannie adds. “It’s hard, and it’s exhausting. But when I think we might have changed someone else’s life—that’s not quantifiable, but it’s what keeps us going. And I think we’ve made some small progress.”

“There has been as much heartbreak as great joy [in hiring the formerly incarcerated]. It’s hard, and it’s exhausting. But when I think we might have changed someone else’s life—that’s not quantifiable, but it’s what keeps us going.”

A Partner for Expansion

With three stores running full-blast, the Uyaniks have pressed the pause button on further expansion—for now. “My favorite saying is, man makes plans, and God laughs,” Jeannie says. “There is no good Chinese restaurant in this neighborhood. If we were kamikaze-crazy, we would absolutely open Harlem Chinese Co. But our learning curve has been steep.”

Opportunity keeps knocking, however, even though their star chef, Shepard, has moved on to another job. “Alper has had a lot of offers…to take the concepts to Asia,” Jeannie says. “It sounds exciting, but what’s the point of opening Harlem Burger Co. in Malaysia or Singapore if our restaurants don’t do well here because we’re off gallivanting? There is so much we can do right here.”

And there is still so much to learn. “If we got to that point [of opening another restaurant], we would want more of an active partner,” Jeannie says. “We’d need to have cohesiveness between all three existing restaurants and the fourth, and bring in someone who knows more about marketing and branding. We’re not salespeople—we just make good food. For all the possibilities, right now we want to make sure Sliced is optimized. That takes a while. Pizza Co. and Burger Co. have their following, but Sliced still needs some loving care, and we’re working on that. And then we can go from there.”