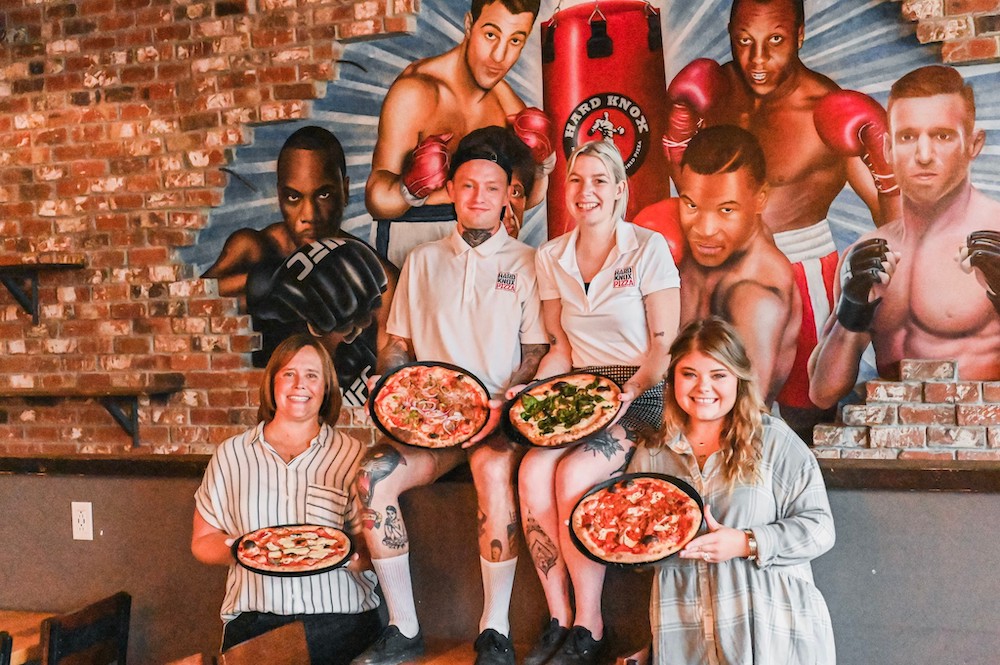 Alexa Sponcia, co-owner of Hard Knox Pizza, went into labor with her new baby on the day a COVID-19 shut-down went into effect in Knoxville, Tennessee. But raising a family hasn’t kept her from growing the company she took over from founders Dean and Jill Bastian in 2014. In fact, Hard Knox is gearing up to open its third location this spring.

Named to the Knoxville News Sentinel’s 40 Under 40 class, Sponcia, 36, prides herself on grooming future business and community leaders at her stores and “giving people opportunities to grow and learn,” she told the newspaper recently.

The Bastians developed the Hard Knox concept around a pro boxing theme, which continues to this day, most notably in the form of a highly Instagrammable mural that features legends of the sport. When Sponcia bought the restaurant, she said she faced a big disadvantage because she never went to college. “There were a lot of tools that I didn’t have coming into this business. I had to ask people many questions and ask for a lot of help.”

But Sponcia has since overseen Hard Knox’s growth to two stores in Knoxville with a third on the way. In 2015, the company developed the School of Hard Knox, a community engagement approach that focuses on Knoxville’s youth and under-resourced schools. That same year, Hard Knox launched an initiative to supplement Austin-East Magnet High School’s Culinary Arts Program, bringing in local chefs to the school’s kitchen. Last year, the company donated 100 percent of its store profits for nearly a week—from Tuesday, April 20, through Sunday, April 25—to Austin-East. The funds could be used to meet any needs the school identified.

Along with forging heart-to-heart connections, she plugs straight into the community’s stomach with a menu described as “Knoxville neo-Neopolitan pizza that packs a punch.”  Most of those pies bear boxing-themed monikers like the Rocky Balboa, the La Motta and the Iron Mike. Other menu items include small plates, calzones, salads and desserts, plus craft beers and wine.

Along the way to her current success, Sponcia took a few punches herself. “I learned a while back at a previous role that I needed to treat people with value, dignity and honor,” she said in the Knoxville News Sentinel interview. “I wasn’t in the best place personally at that time. And in the end, my whole staff left, and it was a time for me to adjust and focus on the ‘why.’ It was hard but definitely a learning experience for me.”

Today, Sponcia wants to help other young people find their way into careers as entrepreneurs, whether in the restaurant industry or other fields. “Really, it’s not always about the food,” she told the Knoxville Mercury. “It’s about relationships with the kids. Some may want to work, some may not want [to go to] college, so how do we educate them in a different way? Most restaurant owners are super-creative, all over the place, and most of the time entrepreneurs aren’t A students. I love the idea of giving hope, that we care where they are—how can we connect?”