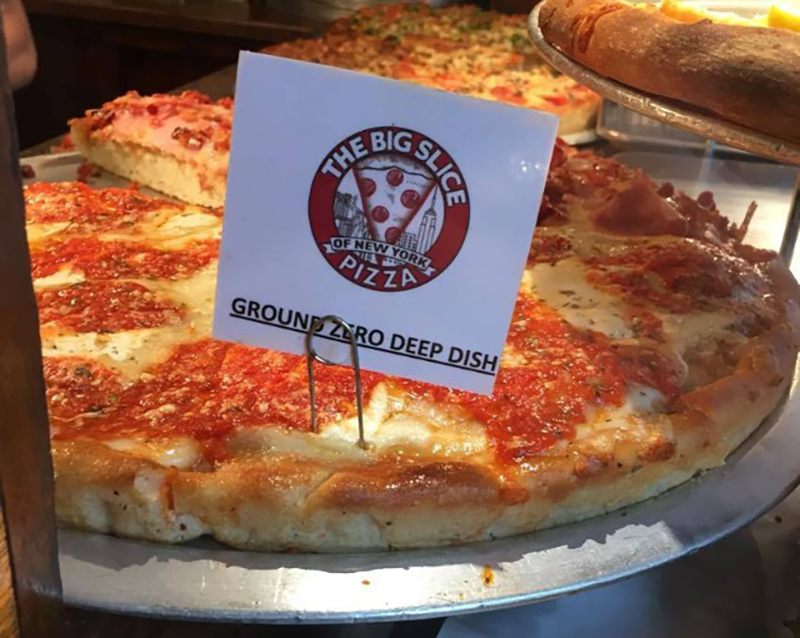 Almost from the beginning, Mike Steinberg knew it probably wasn’t a good idea to name a pizza after the 9-11 terrorist attacks. But the owner of Bravo Pizza, a shop on 5th Avenue in Manhattan’s Flatiron district, was looking to shake up his branding and wanted to try something new.

In the process of expanding his pizza shop and transitioning to a new name—Big Slice of New York—Steinberg decided to rename his pizzas as well. He’d already added pies called the Empire State Buffalo Chicken and the Soho BBQ Chicken to his menu. But something told him that a pie called the Ground Zero Deep Dish was going too far. Unfortunately for Steinberg, he decided to pull it from the menu after word had spread and the local media found out about it.

“I was thinking about taking that off,” Steinberg admitted late last week, when Gothamist reporter Nell Casey called him about the controversial pie. “I don’t want anybody to take it the wrong way, so that’s why I’m probably going to change it.”

That didn’t stop Gothamist from publicizing Steinberg’s error in judgment with a May 13 article. The New York Daily News then seized on the story, despite the fact that, by the time the tabloid’s reporter and photographer arrived at the pizza shop, Steinberg had already dumped the pie from his menu. The Daily News ran with it, anyway, and made sure to seek out some offended customers for comment.

“Should I even be eating here?” one patron is quoted as saying. “Wow, that is not a good name for a slice of pizza. A lot of people were killed at Ground Zero.” Another said, “Surely there were other options. I had a friend who lost his dad that day. What kind of business renames its goods to take advantage of a national tragedy?”

For his part, Steinberg assured the Daily News that he understood why some customers were upset. “We took it off the menu because we didn’t want to offend people,” he said. “My uncle is a firefighter. We take care of the firefighters and the police.”