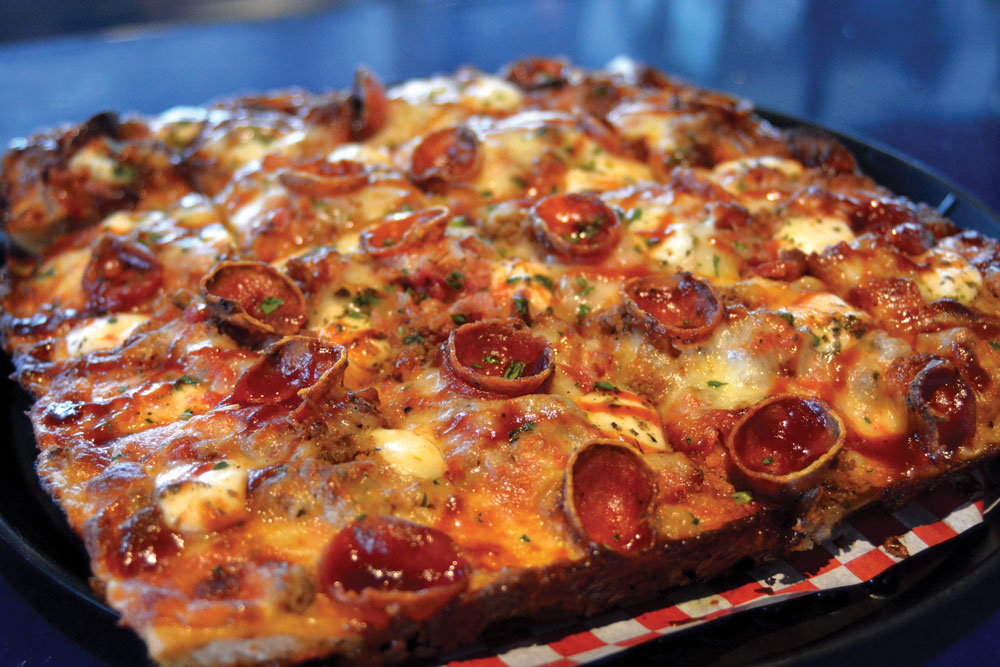 Most folks wouldn’t want to be stuck with Nonna’s old TV set or telephone, but grandma-style pizza—that’s a different story. Dating back several generations, the grandma pie didn’t become a popular style in restaurants until the mid- to late 1990s. Now it’s spreading everywhere, thanks in part to a catchy name that evokes feel-good nostalgia in just about every pizza fan.

“This style was one of the first pies we learned to make growing up with our grandparents at home and in the restaurant. We were able to keep it in the pan and put the toppings on and put it in the oven ourselves. That’s one of my favorite pizzas.”
— Fran Garcia, Artichoke Basille’s

Still, some feel that drawing distinctions between certain Sicilian-style pizzas and the grandma style is like splitting hairs. The Sicilian-style pie served at New York-based Artichoke Basille’s Pizza, co-owned by Francis Garcia and Salvatore “Sal” Basille, fits the technical definition of grandma-style but goes by Sicilian. “Grandma pie was a name I started hearing in the late ’90s and early 2000s. For most pizzerias, it was a thin-crust Sicilian,” Garcia says. “People started calling it grandma pizza. We always call ours Sicilian pizza. I don’t think I have the word ‘grandma’ on any one of our menus.”

How It Came to Be

But grandma style has become a fixture on other restaurants’ menus around the Big Apple. Like many pizza styles, grandma-style has its U.S. origins in New York City bakeries in the early 20th century. Bakers would take thin-crust focaccia-like dough, coated with olive oil, and top it minimally with anchovies or olives, originally with no cheese (deemed too expensive at the time), then serve it by the slice to hungry workers on their lunch breaks. Cheese was added later, and the pie became what we recognize as pizza today. “My great-grandfather used to sell pizza by the slice for lunchtime in his bakery in downtown Brooklyn in the 1920s and 1930s,” Garcia says. “He didn’t take time to let the dough proof. It was just a fast bake; he cooked it well-done, using a lot of olive oil. It was salty, saucy and crispy, and that’s the way we make our pizza today at Artichoke.”

The “grandma” moniker is often used because this is the type of pie Italian-American women baked as a quick and easy snack for their grandkids visiting the house, especially since it could be made in a conventional home oven. “This style was one of the first pies we learned to make growing up with our grandparents at home and in the restaurant,” Garcia notes. “We were able to keep it in the pan and put the toppings on and put it in the oven ourselves. That’s one of my favorite pizzas.”

“It’s the pizza of the home, not typically of a pizzeria,” adds Scott Wiener, founder of Scott’s Pizza Tours in New York. “Grandma pizza has been made in homes for decades but didn’t take on the name until the early 1990s, when pizzerias on Long Island started selling it and using the name.”

Not Just for New Yorkers

The earliest commercially available grandma-style pizzas are attributed to Umberto’s Pizzeria & Restaurant in New Hyde Park on Long Island, and later a satellite location, King Umberto’s. Originally served only to Umberto’s employees, at some point in the late 1980s this pie was put on the menu and eventually dubbed grandma-style, quickly gaining popularity in the region.

Although once thought to be unique to Long Island and the metro New York area, the grandma pie has since been exported far and wide. In 2005, New York-based restaurateur Peter Cinelli opened Cinelli’s in Cary, North Carolina, where the style is extremely popular. In 2017, Brooklyn-born pizzaiolo Vincent Rotolo launched Good Pie restaurant in Las Vegas, featuring the grandma-style pizza in addition to other styles. Grandma-style pies have also been seen in Florida and California, among other places. “There’s nothing that ties it to one region,” Wiener says. “It became popular in the New York City area first, but I have a feeling you’d find this and similar pizzas being made in bakeries and homes in lots of Italian communities.”

Bill DeJournett is a freelance writer based in Oxford, Mississippi.

Thinly slice 5 cremini mushrooms, 6 shiitake mushrooms and 3 heads of oyster mushrooms. Add EVOO to a large sauté pan and cook shallot until it turns translucent. Add mushrooms, butter and thyme. Cook on medium-high until mushrooms are tender but not overcooked. Add a pinch of salt and pepper for flavor.

Soak the rosemary and olive oil for one hour before making dough. Cold-ferment dough ball for 48 hours. Pull the dough ball out of refrigerator an hour before stretching. Generously oil the grandma pan. Place dough ball in the middle of the pan and gently push dough out evenly. Cover with plastic wrap and let sit for an hour. Then push the dough out one more time so it reaches the corners of the pan. Par-bake at 500-525˚ degrees for about five minutes or until slightly browned.

Place par-baked dough on lightly oiled pan. Evenly spread out your three shredded cheeses, leaving one inch of crust around the edges. Spread half of your mushroom medley out and drizzle with sauce. Add cup-and-char pepperonis. Layer remaining mushroom medley around pepperonis. Bake the pizza at 525˚ for 7-10 minutes until crust is golden-brown.

Remove pie from the pan. Drop small diced cubes of mozzarella into the middle of the pepperoni cups and add pan-fried pepperoni on top. Return pizza to oven straight on the brick for 30-45 seconds to make the bottom of the pizza golden-brown and crispy. Finish with chiffonade of basil and freshly grated Parmigiano-Reggiano.