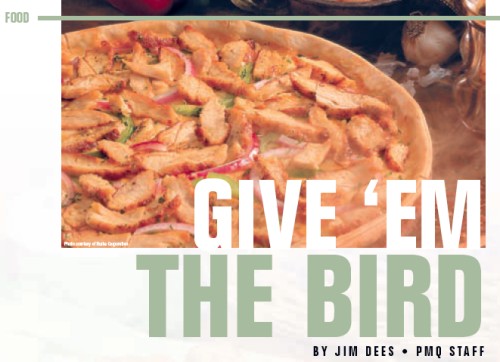 The gradual evolution of chicken onto pizza menus is due to one simple fact: the bird sells. In fact, chicken has performed so well on pizzeria menus nationwide, it has even outsold traditional chicken outlets such as Kentucky Fried Chicken. A year ago, KFC reported a same store sales drop of ten percent, a plunge the company directly attributed to fried chicken offerings at Domino's and Papa John's. KFC CEO David Novak said then in a statement that "8,000 units are now selling crispy chicken which was not the case years ago."

"We don't think the quality or price the pizza competition is offering will constitute a long-term threat, but there's no question we have a new competitor," Novak concluded.

Allison Hughes, manager of Spiritus Pizza of Provincetown, MA, has followed the rise of chicken and says her store added grilled chicken pizza toppings to its menu five years ago."It's been a good seller for us, although we haven't jumped into chicken really hard," she said, noting that Spritius offers grilled chicken only as a pizza and salad topping.

Chicken, while a robust seller, can also be troublesome. The fowl can go foul quickly if proper precautions aren't taken. Most operators buy it frozen, and Spiritius is no exception."We receive it frozen and then the day we're going to use it, we move it into our topping refrigerator," she said. "Since we only use it on two dishes, we really don't have to buy a lot at one time. That helps us keep it fresh."

Despite the success of chicken, Hughes says Spiritis has no plans currently to add more chicken items. "We have grilled chicken special with sun-dried tomatoes and pesto that's a very good seller for us but I think for now we'll just stick to that and as a topping for our pizza. Chicken works very well for us on the build-your-own pizzas," Hughes added.

While Spiritus is keeping its chicken dishes cooped up, New York Pizza Depot (NYPD) of Ann Arbor, Michigan has gone chicken crazy with a menu featuring a dozen different dishes. Maurice Grillo, food manager of NYPD, says his pizzeria hasn't had to undertake any special marketing to promote his pizza dishes. "We're in a college town here in Ann Arbor," Grillo says. "Our store is across the street from campus. College kids tend to be a little more conscious about the way they look. We sell a lot of grilled chicken especially on salads. Our clientele is always looking for healthy meals. They like the protein values."

Though the grill chicken is a favorite at NYPD, Grillo reports that he has found success with a wide variety of dishes. In addition to his three varieties of toppings; breaded, grilled and BBQ, the menu is also chicken-strong on appetizers. NYPD serves chicken wings, chicken tenders and chicken parigama.

The pizzas are offered with fresh tomato and chicken toppings but a barbeque chicken pizza has also proven popular and again, Grillo says he hasn't had to promote it in any special way."Barbeque is good because the chicken is not fried it's literally boiled and worked with the barbeque sauce so it doesn't have any fattening on it. It's a particular taste, although it doesn't sell as good as the grilled. Grilled is the major salad seller, then barbeque, then breaded. There's always a call for it. We're always looking for a new dish. Whenever we add something new we always try to think of our student market as well as our family market and try to find something that everybody will like."

Like most operators, Grillo is sensitive to his market's needs and realizes that what works in his shop may not necessarily work everywhere. NYPD uses standard promotional techniques such as mailing coupons but other than that the food speaks for itself.

"I have friends in New York who tell me they sell more of the breaded chicken. It's definitely a better taste. But that's the major difference. We're on a college campus.

The chicken tenders are a particularly good seller with the college kids. The chicken plates go very fast. If it's cooked in a particular way, without cheese, it's a very healthy meal with lots of protein and stuff. Of course you can have a more tasty variety, like the battered, but we're finding that people around here seem to go for the more healthy plate."

Grillo, who recently returned from a fact-finding trip to Italy, says he has read much of the available industry literature on chicken and likes what he sees. " I've read reports that say tenders are now the most popular appetizers in the country," he says. "A couple of years ago wings were probably on top. Tenders seem to be more of a stand-alone item, plus they're a great kids food. It's a whole different category that I think we've only scratched the surface of. With so many places selling tenders it can only help raise awareness and get more people ordering it."

Chicken, like fish, has to be handled and stored properly. Like his counterparts at Spiritus in Provincetown, Grillo says NYPD also receives its chicken frozen. "We started out receiving it fresh but given how many dishes we serve we decided to go frozen because it's safer. Plus," he adds, "the price went up so it just made more sense to keep it frozen until we need it." Van Eerden Distribution Co. out of Gross Pointe, Michigan supplies NYPD with chicken.

Living more dangerously is Hikmat Seraj who owns New Yorker Pizzeria and Fried Chicken in Albany, New York. Seraj offers among his many pizza and chicken items, 21 piece boxes of fried chicken. He says he receives his chicken twice a week, fresh and vacuum-packed, from Sysco and he immediately stores it in a cooler. "We have to be very careful with the chicken because it only has a shelf life of one week," he says. "So far we haven't had any storage or spoilage problems."

New Yorker Pizzeria opened in 2000 as just a pizza establishment but Seraj says chicken evolved from customer requests and his own experience. "I'd had some prior experience with the fried chicken business in New York City, plus we had requests for chicken from customers. I'd say now, five years later, our business is about fifty-fifty, half fried chicken, half pizza."

A slice of the pie

Albany, like Ann Arbor, is a college town and like their Michigan counterparts, the New York students love pizza. However, according to Seraj, his clientele may not be as health-conscious as the grilled chicken enthusiasts of Ann Arbor. "We offer salads but it's not a particularly big item for us," Seraj says. The students here drink a lot; they're not looking for a salad. They're looking for something that's going to stick to their ribs."

Seraj says the boneless chicken tenders, what he calls "fingers," are a big seller. Depending on volume, boneless products range from about 96 cents to $1.10 for a 6-ounce portion which usually consists of about three pieces. With menu price points at anywhere from $5.99 to $6.99 for 5-8 pieces, tenders offer excellent margins to operators. Indeed, it was numbers like those that induced Domino's and Papa John's to launch their boneless menu additions in 2002. It would seem now that chicken and pizza is a marriage made in profit heaven.

"Chicken and pizza stared out as two separate foods," Seraj says. "It used to be two separate operations, but now they are very much thought of together. A few years ago BBQ chicken pizza was about as far as the two went. Now we have a Buffalo Chicken pizza that has really caught on. I think there are going to be other ways we can match up chicken and pizza if you just use your imagination."

Grillo and his staff at NYPD thought the same thing. They put on their thinking caps and came up with the NYPD Blue Pizza."That's chicken with hot sauce covered with crumbled blue cheese and mozzarella," Grillo says. "The kitchen staff and I were playing around in the kitchen one day and came up with it just for fun, but it's done well for us."

The match up of chicken and pizza can indeed be fun, and as operators across the country are finding out, the result can also be serious business.