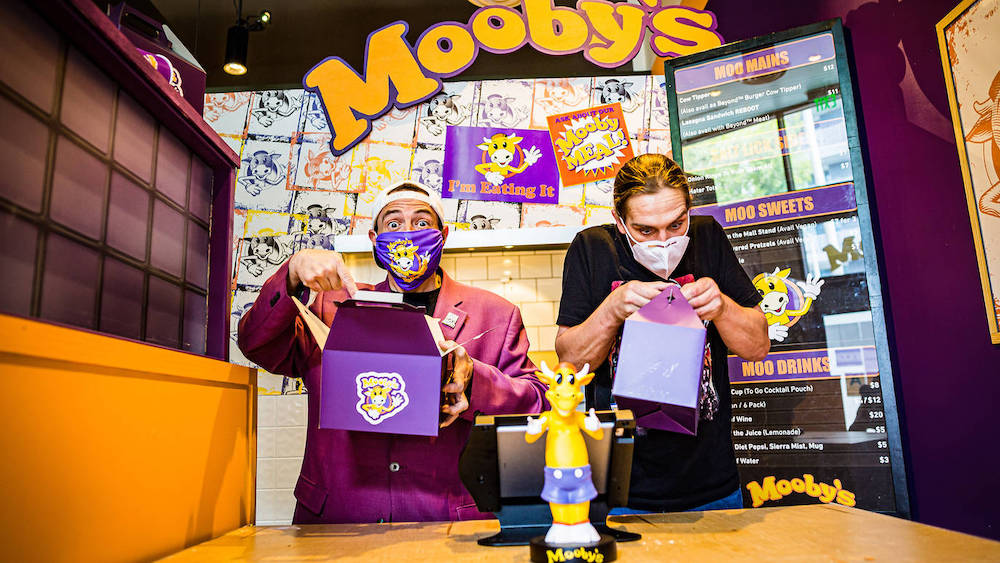 Kevin Smith and Jason Mewes check the orders for Mooby's.

Fans of Kevin Smith films can finally eat at the restaurant of their dreams later this month when a New Jersey pizzeria hosts a pop-up event for Mooby’s, the fictional eatery that became less fictional in 2020.

Gianni’s Pizzeria, located in the Red Bank borough where Smith grew up, will host Mooby’s from September 18-25. The carryout-only menu will feature $30 meal deals with items like the Cow Tippers burger, the C-ck Smoker Chicago sandwich, Hater Totz and Onion Rings to Rule Them All. Smith, a vegan since 2018, will also offer vegan options, including a Beyond Beef Cow Tippers burger and the Messy Vegan Lasagna Sandwich, as well as King of the Juice lemonade.

In fact, Jason Mewes, the actor who plays Jay opposite Smith’s Silent Bob character, delivered pizza for Gianni’s when he was younger, according to a recent Instagram post by Smith.

“For one week, the fun folks at Gianni’s are turning their exquisite pizzeria into the fake fast food joint most recently seen in Jay and Silent Bob Reboot,” Smith said in the post.

Red Bank is also the home of Jay and Silent Bob’s Secret Stash, Smith’s comic book store featured in the AMC reality series, Comic Book Men. In fact, according to NJ.com, the comic store will have its own pop-up within the Mooby’s pop-up.

The sort-of-real-life Mooby’s debuted in Los Angeles back in April as a carryout pop-up to raise funds for No Us Without You, a nonprofit that feeds undocumented hospitality workers who lost their jobs in the pandemic. Timeout.com reported the pop-up, featuring food prepared by chef Royce Burke and his Secret Lasagna team, was so successful that “it crashed Postmates twice.”

Smith brought the concept back in June and raised funds for a neighborhood initiative to clean up South L.A.