Some of the most interesting and useful stories find their way to PMQ from our vendors who are out in the pizza shops working with owners/operators on a daily basis.

Richard Ferrara, VP of Marsal & Sons, gave us the tip on this amazing pizzeria called Z Pizza and introduced me to the founder, Sid Fanarof. Upon my visit to Z Pizza, I found it to be a lesson in successfully combining creativity and marketing with great pizza.

I had the pleasure of chatting with Sid this past year at a trade show. He told me only the finest ingredients are used to make their pizzas. They also focused in on healthy pizza choices. Wheat crusts, low-carb crusts, part skim mozzarella, non-fat cheeses, soy cheeses, low-fat organic sauces and tons of veggie toppings give customers plenty of options to create the healthy pizza of their choice. With choices like these, I knew he was on to something.

In a later conversation with Chris Bright, co-founder and president of Z Pizza, he told me that the healthy pizza is something they’ve always done, but only recently started advertising. “Before this health-craze hit, we found that most people, while saying they wanted to eat healthy, would rather splurge when they go out to eat than follow a diet. Now that eating healthy is such a big thing to do, we find that we get a lot of loyalty from customers who want healthy pizza.”

After talking with Sid, I was most interested in tasting one of the mouth-watering masterpieces he’d told me about. However, I would have to wait to try one until I could tour one of their Z Pizza shops.

This summer I finally had the opportunity to visit Z Pizza in Roseville, California. The franchisee in Roseville, John Hedges, was kind enough to give me a tour and a taste of one of their popular pizzas. As I wasn’t sure which of the pizzas to try, I asked John which was their most popular pizza. He advised the Z.B.Q. Pizza—I told him to bring it on.

My meal ordered, I sat back and watched the pizza store in action. The pizzas are made in full view of the customers. While watching the pizzas being made was entertaining, it also gives customers a sense of relief to see their pizza made right in front of their eyes. The spotless Z Pizza kitchen made me feel at ease to know that cleanliness was a top priority. 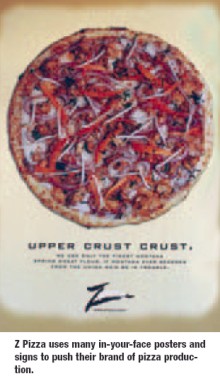 “Making the pizza up front where everyone can see it raises enormous hygiene issues. Washing hands, wearing gloves, and not touching anything dirty are major parts of our hygienic regime,” Chris told me.

The fresh dough was spread on a pizza screen pan and all of the Z.B.Q. pizza toppings added. The deck oven allowed the pizza to be cooked from the top to crisp all of the toppings, as well as the bottom to create a very tasty crust. The pizza came out of the oven baked to perfection.

Now I understood why marketing their stores and products was so important. With such a delicious and healthy product, Z Pizza had no problem keeping customers. The biggest problem was getting new customers in the door. This was where their marketing techniques step in to generate more business.

What impressed me the most about Z Pizza? The unique menu. It offered sixteen unique international pizzas that represent taste from all over the world. In addition to this they offered a “Create Your Own Z Pizza” option.

This included a choice between wheat and regular crusts, six types of sauces, six types of cheeses, 20 veggie toppings, 10 meat toppings, and five different herbs and spice options. With a little imagination, you could create any type of pizza you wanted. Their menu also included salads, a limited number of pastas, sandwiches and calzones. They have found that if they get you to try their pizza, you will be back.

With so many choices, I wondered how all of the orders were kept straight, especially on busy nights. It turns out that they use a POS system (Microworks Prism), which takes away the challenge of having such a large menu.

The Z Pizza Roseville store did a good deal of neighborhood marketing to get the word out about their pizza. Menus printed on colorful paper were hung on doors throughout the neighborhood on a regular basis to expose the community to their “Create Your Own Z Pizza” concept. A gift certificate was at the bottom of every menu that was distributed.

The door hanger gave $5 off any purchase with a $10 minimum, but they don’t enforce that, giving away the coupon instead. To distribute the door hanger, delivery drivers were told to hang them at five houses in both directions from the home to which they delivered the pizza.

Another successful marketing strategy was to go after the corporate catering segment. One successful campaign presents empty pizza boxes to the corporate catering managers in the surrounding area. Small pizza boxes stamped with “Sid says, ‘I hate empty pizza boxes so I’m filling this one for free’,” gets the word out to potential customers that there is a new pizza place in town. This has been effective way to get the managers to try the product and gain new business in a new market.

A stand-up sign placed just outside of the Z Pizza building tells passers-by, “Z lunch specials: two slices of pizza and drink for one price.” At dinnertime, the sign is turned around to reveal three different dinner specials designed to bring in more evening traffic. The first offer, called “Pint Night” was my favorite. Pint Night offered a free pint of Ben & Jerry’s Ice Cream with any original large pizza and was good only on Sunday and Monday nights. Chris told me that for every case of Ben & Jerry’s Ice Cream that Z Pizza sells, they receive half of a case for free.

The second offer was called “Create Your Own Special: Pick-a-Pizza.” This special offers a salad and a 2-liter beverage of your choice. On Tuesdays and Thursdays, an additional $5 is deducted. The third special is a free “Dip n’ Stix” with a purchase of any large salad on Wednesday.

After seeing the results of their marketing in action and enjoying my tour of Z Pizza, I understood what Sid and Chris were trying to accomplish in their efforts to get customers in the door.

The past six months an advertising agency has handled the marketing for Z Pizza. “We found that it was beneficial to have someone looking out for us and our branding. It took about six months for the agency to find the voice of Z Pizza and figure out how to convey the culture of the store,” Chris told me.

Their marketing must be working for them. Z Pizza’s pizza crust was voted “Best Crust on the Planet” by The Los Angeles Times, while their recipe for Napoli pizza was recently listed in the “Top 20 Dishes for 2003” by The Daily News of Los Angeles restaurant critic, Larry Lipson.

Before the advertising agency, Z Pizza used freelancers to help out with any advertising or specials that they did. Chris said that they found that approach created a disconnected feeling and made it difficult to come up with a voice for the Z Pizza brand. 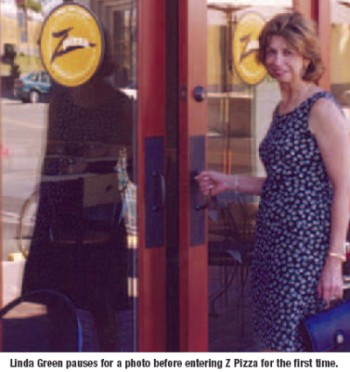 When asked about the worst marketing idea they’d ever had, Chris told me that without a doubt the worst thing they’d ever done was a radio remote at a grand opening of a new store. “We spent several thousand dollars on the radio remote and received bad returns. Our stores are generally 800 to 1,500 square feet and we found that for a radio remote to work, the store and the opening needed to be bigger.” They found that spacing a grand opening over a 30-day period worked much better. Every day of the first month of being open the new owners give something away, whether it’s ice cream, balloons or pizza.

While I was at Z Pizza, I was handed a menu. A line at the bottom of the menu, “Taste it. You’ll understand,” caught my attention. After watching Z Pizza operate and seeing its marketing in action, I understood that their catchy slogan worked both on paper and in their stores.