Get your motor running by starting your own food truck or mobile kitchen business. - PMQ Pizza Magazine 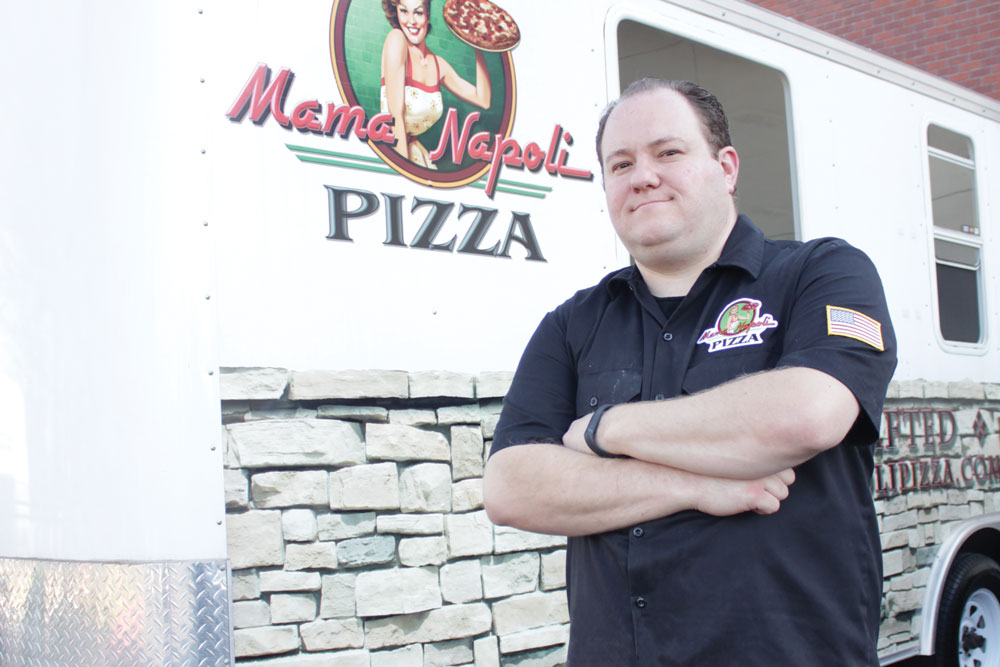 When the Great Recession hit the United States in 2007, the restaurant industry suffered a major slowdown. But food trucks were picking up speed in trendsetting cities like Los Angeles and Portland, Oregon, thanks in part to high-end innovators such as Kogi BBQ. A revolution was officially under way.

From 2009 to 2014, food trucks have grown at an annual rate of 12.4% in the U.S., making mobile units “one of the best-performing segments in the broader foodservice sector,” according to market research company IBISWorld. Today’s mobile hopefuls are also smartening up, according to Joseph Pergolizzi, founder of Fire Within in Boulder, Colorado. “I think the food-truck craze is still going to grow, but by now, the rock-star appeal has worn off,” he says. “People used to think they’d make a quick million with a food truck, but now they realize it’s a business.”

“Late at night, the [food truck] customers can be ‘interesting,’ so you need employees who like the adventure. It’s less controlled and manageable [than a brick-and-mortar]—such as when the rush will be or what the customers will be like—so find people who don’t mind a free-form environment and have an aptitude for controlled chaos!”
—John Arena, Lulu’s Bread & Breakfast

As demand for upscale comfort foods and experimental recipes grew, customers and restaurateurs alike fell into the food truck frenzy. “They’re associated with those who are very passionate about food and have unique, high-quality menus—even specialties that might be less commercially viable,” notes Tim Younghans, owner of Mama Napoli Pizza, a food truck operation in Las Vegas. “A food truck can bring the wow factor.”

The option can also be attractive for an existing pizzeria. Bruce Jackson, owner of Brucci’s Pizza (bruccispizza.com), already manned three brick-and-mortar locations in Florida when he decided to add a food truck. “It brings an element of community growth and branding,” he says. “To open another brick-and-mortar and not have them overlap in business, you typically need to go to an entirely different area of the city.” With his mobile unit, Jackson can focus on outdoor concerts, festivals, carnivals, fairs and school events.

Jackson notes that mobile units have other benefits: They’re relatively cheap, have minimal overhead, and can be sold for 80% of initial investment in most cases if the person struggles with the business. “There are no leases to personally guarantee or half-million dollar loans,” he adds. “The schedule is attractive as well; you work when you want and if you want, and there are no hours of operation to staff for.”

For Younghans, flexibility was key in his decision to build his own trailer, a 20’-by-8’ unit with a wood-fired oven. He was also able to start the business on credit, foregoing the loan process. “The main advantage is not having to worry about a lease,” he says. “If a location doesn’t work, you go somewhere else. If you want to open up a brick-and-mortar location later, you can test the waters in a neighborhood with less overhead. And I set the schedule—I can go out on weekends and build up to full-time.”

Pergolizzi agrees that mobile offers the ability to go where the customers are, creating a high level of demand and enticing them to follow you. “A great part of mobile for beginners is making money while creating your brand,” he notes. “And if you already have a brick-and-mortar, a truck can be a no-brainer because one feeds into the other. You already have customers, and a mobile unit is a way to bring your food to them—they love that.”

A Unique Set of Challenges

John Arena, owner of Metro Pizza (metropizza.com), with multiple locations in the Las Vegas area, did his homework before entering the food truck game. He initially used a food truck to build a fan base for his newest venture, the now-brick-and-mortar bakery Lulu’s Bread & Breakfast (lulusonthemove.com).“Are you going to use your mobile unit as a special-event provider, serve business areas like office parks, or park at a venue where food trucks congregate?” Arena asks. “You have to know what you’ll do before you start, because this type of business has its own unique set of challenges that are very different than brick-and-mortar businesses.”

For starters, food trucks don’t work in every market (such as those with few areas for trucks to congregate), while brick-and-mortar restaurant owners in some cities fear the competition and have been quick to lobby against food trucks. “There were other legislation issues because cities weren’t prepared to regulate trucks,” Arena notes. “In our area, thanks to suburban sprawl, you might need four different licenses to get around.” Your town’s regulations may also dictate where you can prep, park, clean and dump greywater.

There are other difficulties, too, Arena notes. You’re at the mercy of the weather, especially if you don’t have a brick-and-mortar location where you can return unsold food, and restaurant equipment—which is not designed to be driven over bumpy roads day after day—can break down. “Compared to a brick-and-mortar, a mobile unit requires less on the construction side but more effort in running it,” Arena adds. “Luckily, followers of food trucks are extremely vocal and supportive on social media, and they can transition easily to a brick-and-mortar.” In fact, Arena notes that most early Las Vegas food trucks have transitioned to physical locations after growing their fan bases.

But for a pizza-focused concept, Jackson believes, it’s difficult to start off with a food truck alone. “There are pizzerias everywhere, so I’ve found that selling pizza in business parks or a downtown parking spot can be considered relatively boring,” he says. “Most of the successful food trucks have more obscure items. But our biggest advantage is a shorter wait time.” For example, if Jackson works a festival next to a specialty taco or burger unit, he can serve three people to every one of theirs if he offers slices; at some large festivals, he averaged 1,400 slices in an eight-hour period.

Finally, if you’re starting out with a mobile business and hope to transition to a physical location, you’ll face a different set of rules. You can get away with mistakes in a truck that would never fly in a brick-and-mortar since customers have lower expectations of mobile kitchens, Arena says. Additionally, the social scene is a big part of food trucks, so these customers don’t mind waiting in line—not the case in a typical restaurant.

“A great part of mobile for beginners is making money while creating your brand. And if you already have a brick-and-mortar, a truck can be a no-brainer because one feeds into the other. You already have customers, and a mobile unit is a way to bring your food to them—they love that.”
— Joseph Pergolizzi, Fire Within

Still determined to take your pizza show on the road? Here are some tips for success:

Food trucks live or die by word-of-mouth, but it all starts with the owner’s ability to create a recognizable brand on wheels. It helps to build relationships with other catering companies, Pergolizzi notes, adding, “Set up at farmers markets, too. You’ll get half of your catering leads in the first year from them.” (Check out localharvest.org for a list of farmers markets in your area.) You should also build partnerships with local breweries and wineries and attend small community events with a sign that says, “We cater.” Other marketing tips include:

Start in your own parking lot. If you already have a pizzeria and want to get the word out about your mobile unit or catering services, station the unit in your parking lot one night a week and serve customers one specialty dish from it, Pergolizzi suggests.

Take good pictures. Establish a website with good pictures—not just of your food, but of an event in action. “Have a party at your house or in a park—somewhere pretty—and invite your friends and hire a photographer to take pictures,” Pergolizzi suggests. “Put on your chef’s coat and display your best tablecloths. Staging an event gives potential customers a little show.”

Use social media. Arena notes that food trucks are more than restaurants—they’re a mobile social scene. And those customers are often social media addicts. Younghans uses Facebook to promote his business and advises posting pictures daily, since today’s consumers won’t read a lot of text. “Don’t post too often,” he suggests. “Fewer posts create more likes and a stronger reach.” But don’t skimp on posting, either. If you don’t update your Facebook page regularly, people will think you’ve gone out of business, Pergolizzi says. “Take a Facebook class and learn how to schedule posts to appear each day for a month or a year—you can do all those posts in a day!” he says. “Be consistent, and put an image on every post. Remember, women use Facebook more than men—and women are the ones who book parties.”

Look for compatible locations. Younghans sets up at craft breweries, since they don’t have kitchens of their own—he calls craft brews and food trucks “best buddies” because of their overlapping customer base. “These breweries have huge fan bases and can talk about you on their social media,” he adds. “As their business grows, yours does, too.”

Above all, keep in mind that mobile trucks are just that—mobile—so don’t let a bad day get you down. “It’s a learning process,” Jackson says. “You’ll fail at a lot of events and roll up in bad spots way more than you’ll find good ones. The biggest advantage we have in mobile is that we can just move the next day or not do an event again!”

Ultimately, if flexibility and composure are advantageous in the mobile kitchen biz, planning ahead is downright essential. “It’s important to be organized in a restaurant, but it’s doubly important in a truck. If you’re not organized, you’re dead,” Arena concludes. “This is the UFC of foodservice: You’re in people’s faces under challenging conditions, and there’s no room for error. It’s cooking as cage fighting.”