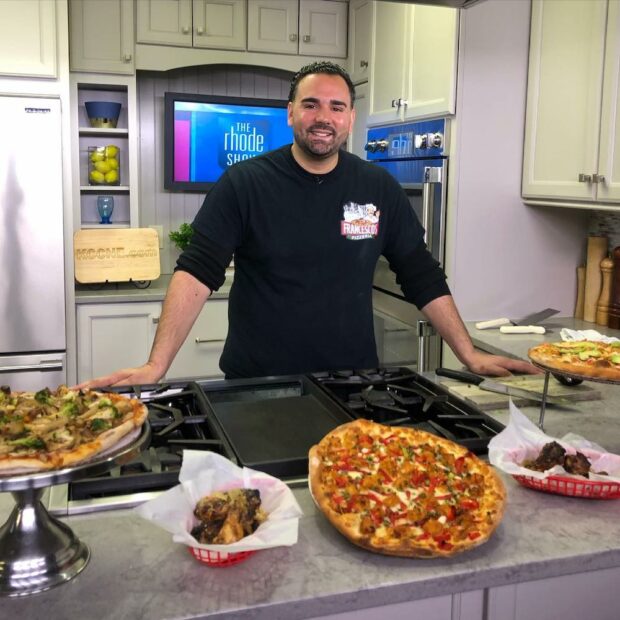 Frank Schiavone and others from Francesco's Pizzeria have made several appearances on local TV shows in Providence, Rhode Island.

As many Americans still refuse to get vaccinated for COVID-19, despite urgent pleas from medical experts, Frank Schiavone, co-owner of Francesco’s Pizzeria in Providence, Rhode Island, tried to make his community safer for everyone.

Francesco’s gave away a free slice of pizza on Sunday, May 2, to any customer who showed up with proof of vaccination.

Francesco’s is a new mom-and-pop pizzeria that uses a dough recipe that’s more than 100 years old, according to WPRI.com. Specializing in New York-style pies, Francesco’s opened in October, but Schiavone is the latest in a family of pizza people dating back four generations to the original Francesco, who immigrated to New York from Italy in 1918. He worked in a number of pizzerias in the Bronx and eventually opened his own restaurant, with a recipe handed down by his mother and grandmother.

Schiavone said his team handed out 250 slices to vaccinated customers in the earlier part of the day on May 2 before things settled down a bit. He told WPRI that he wanted to “mix business in [with] trying to do something good.”

“At the end of the day, I’m just trying to be almost like a leader in the sense of, let’s just get by this,” he added. “Let’s do what we have to do, to get ourselves back to work, back out in restaurants, get people off unemployment and let’s just start moving.”

Why and How Sarpino’s Developed a Vegan Pizza Menu