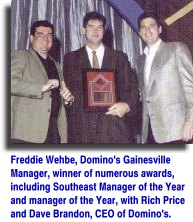 Freddie Wehbe, Domino's Gainesville Manager, winner of numerous awards, including Southeast Manager of the Year and manager of the Year, with Rich Price and Dave Brandon, CEO of Domino's.     Cross-promotional partnerships can be both profitable and convenient, if done correctly. For example, the Domino's, in Gainesville, Florida, and the Gainesville Sun newspaper entered into a limited partnership that blossomed into a unique and very successful endeavor for both parties.

Charlie Corcoran, now the circulation and marketing manager for The Orlando Sentinel, said he met Fred Wehbe, the Gainesville area supervisor of Domino's, initially to work out a deal to get pizza certificates for the pre-paid customers of the newspaper.

"I met with the area supervisor (Wehbe) of Domino's about working on a partnership," Corcoran said. "My primary focus was getting pizza certificates to offer to my pre-paying (newspaper) customers. While Freddie was interested in finding new pizza customers among our readers."

Through this initial conversation, Corcoran and Wehbe developed an increased marketing partnership.

"We found there were a lot of overlap with what they (Domino's) were doing and what we were doing," Corcoran said. "We were both trying to reach the same people. They distributed thousands of door-hangers, we did also. We decided to do a partnership where I get the front and they get the back, or vice versa depending on which way it was hung on the door. I would print it and they would distribute it. Through that partnership, it cut our costs dramatically and we were able to increase exposure."

They did not stop there; this limited partnership began exploring ways for both parties to benefit.

"We did the same thing with box tops," Corcoran said. "They were paying to have the coupon sheet on their pizza boxes. We put our offer on there, they didn't have to pay to print them-we printed them and they distributed them. So, there was a savings on their end as well. In turn, we inserted their offer in our bills. So, they got that exposure of a direct mail piece that was sure to be opened because there was a statement inside with their message."

And a profitable one, for both Corcoran and Wehbe. During these promotions, volume increased five percent in the Gainesville Domino's store. "That's saying a lot in that line of business," Corcoran said.

Wehbe's Domino's store was named by Domino's as the highest volume Domino's location and Wehbe was also named Manager of the Year for Domino's because of the increase in sales from the promotion, as well as many other marketing ideas Wehbe has tried.

"All of a sudden," Corcoran said, "I got all these different newspapers calling me because all these Domino's stores were approaching them to do this. As far as the newspaper side, having the certificates for a free pizza increased our pre-paid sales, that being a key area we always want to increase, from four percent being pre-paid to 85 percent. That is a significant increase because you have something to give them they can use immediately."

Wehbe said the newspaper promotion has been very successful for his store and he continues to use the promotion due to the volume of business brought in by the offer.

"It has been a very popular promotion for us," Wehbe said. "It has provided an economical way to reach customers. That is all you can ask of a promotion, the rest is up to you.

Pizza Tomorrow: Get Ready for a Brave New World