While in New York for the International Restaurant & Foodservice Show and PMQ’s Pizza Showcase this past March, I signed up for a private pizza tour through Brooklyn with Tony Muia from A Slice of Brooklyn Pizza Tours.

I’ve been through every borough in New York sampling slices, but I have to admit that there are still plenty of pizzerias that I haven’t been able to visit. There are a lot of neighborhoods to explore in Brooklyn alone, a borough that covers 71 square miles and houses about 2.5 million people. Tony and I started early and tried our best to hit as many places as we could, coming away with four fantastic pizzerias checked off my list—some old, some new, and all providing different insights about the industry (and plenty of delicious leftovers for the trip back home). 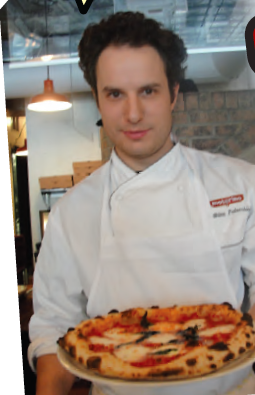 “You know when you’re looking forever for a pair of shoes and then you say, ‘This is the one!’ It’s the same way when creating pizza,” says Mathieu Palombino, owner of Motorino (motorinopizza.com). This is how he describes his journey of trial and error when first formulating the recipe for his now top-rated pizza in the Williamsburg section of Brooklyn. Recently voted the city’s best pizza by The New York Times, it’s hard to believe that Motorino has been open for only a little more than a year, with a pizzaiolo at the helm who used to cook in French restaurants. Even more surprising is that nine months after opening Motorino, he opened a second store in the former location of Una Pizza Napoletana in New York’s East Village. “I wanted to do something that I would like, because you have to like what you do,” says Palombino. “Wood-burning oven, pizza, simplicity—that was it; I loved it.” While he was always eating a lot of pizza some years back, Palombino admits that he had never made any, and realized that very good pizza was difficult to find. “I wanted to make the best, and I knew I’d have to work hard at it,” he says. “But you need to have a challenge when you work; if it’s not challenging, it’s really boring.” Palombino traveled to Naples, Italy, and California to study pizza but found that the best studying was done right in his own kitchen. “I worked on it bag after bag, deduction after deduction, failure after failure,” he says. “I had a precise goal—very airy and digestible, with a rustic look. I made a mental picture of the pizza I ate in Napoli, and that’s what worked on.” Tony and I tried a traditional Margherita and the Soppressata Piccante, a pizza with spicy sopressata, fresh chile and garlic.

What helps Palombino deliver consistently? He credits the equipment and ingredients he uses. A Neapolitan-style oven from Texas, which is kept at around 750° to 770°, cooks pizza in 1 to 1 1/2 minutes using birch, cherry and oak woods; a slicer from Bologna is specially calibrated to perform the gentlest slicing of prosciutto; and a local sausage supplier provides artisanal sausage. We even met the craftsman who creates Palombino’s handmade pizza peels, based on the light, solid peels you’d find in Naples. “It’s fun to work with the craft and create your own tools,” says Palombino. “The pizza peel is a 1,000-year-old tool that is such a beautiful thing in itself; it peels bread into the oven. There has to be a pizza peel somewhere in the Bible!”

The media attention Motorino has received has added a bit of pressure for Palombino, as customers sometimes drive as much as 50 miles to try a pie, but Palombino says he tries to honor every person who comes into the shop. “Pizza is something that is close to the heart of Americans and children,” says the Belgium-born Palombino. “I like it when I see a guy with his son and they’re doing their pizza thing.” 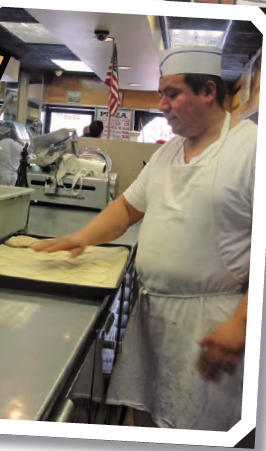 Considered one of the best Sicilian slices in all of New York City, L&B Spumoni Gardens (spumonigardens.com) in Bensonhurst is right down the street from Coney Island and has been serving up old-fashioned spumoni since the 1930s, and pizza since the mid-1950s. Currently run by six members of the Barbati family, L&B is held in high regard by crust and sauce lovers alike, with customers claiming that the secret is definitely in the sauce—a secret that the owners hold tight. “We use San Marzano tomatoes, and it’s not really a cooked sauce, so it tastes really fresh,” says L&B president Lou Barbati. I’m most proud of the consistency of our sauce, cheese and dough over the years. It helps that Franco has been in the kitchen for the past 20 years making the dough; we try to let it rise as high as it can before cooking so that it’s light and airy, with a crispy crust.” As for the pizza’s preparation, chefs top the dough with a layer of sliced mozzarella cheese, a healthy portion of sauce, a sprinkling of Pecorino Romano cheese and some olive oil. There’s no precooking of the thick dough; the large sheet pies (12 slices equals a half pie) are cooked twice after the cheese and sauce have been  added—once at 500° for 10 to 15 minutes, and again at 650° for 10 to 15 minutes. Pecorino Romano is served at the table for those who enjoy a little extra sprinkling of the good stuff. Barbati says the Sicilian pies usually sell five to one over the round pies, to a customer base that is made up of both locals and tourists.

In addition to the popular Sicilian pizzas and spumoni, L&B serves a vast array of menu items, such as salads, appetizers, calzones, burgers, sandwiches, Italian meat and pasta specialties, seafood, and more. We, of course, ordered a 12-slice Sicilian and had no problem polishing off a few slices while mingling with some customers who had their own theories about the secret tomato sauce. And, while L&B regulars are perfectly happy with the current Brooklyn digs, Barbati has revealed the possibility of a second location in the restaurant’s future. Stay tuned. 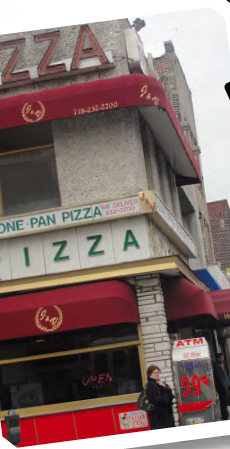 Now in its 60th year as a family-run operation, J&V Pizzeria (jvpizza.com)  in Bensonhurst was started by two Italians, Johnny Mortillaro and Vincent DeGrezia, who loved cooking and wanted to share that love with their neighborhood. They began selling slices for 15 cents through a window at the front of the pizzeria, which is still in operation today (although the slices cost slightly more than 15 cents now). Manager Joe Mortillaro has been working at the pizzeria for more than 20 years and says that if he doesn’t like the taste of something, he won’t make it. “Our most popular items are our round pies, square pies and our JoJo sandwich,” he says. The JoJo sandwich, which is named after Joe’s son, is an item for which the pizzeria has become known over the past six years, and consists of garlic bread topped with cheese and sauce, and a choice of either chicken or meatballs. We wanted to taste all of the favorites, so we sampled round and square pies, plus JoJos, while we watched the massive rotating-deck oven churn out more pies and contemplated our next slice.

Mortillaro considers J&V to be a neighborhood hangout for locals, and Tony attested to that fact, reminiscing about the days when his mom would bring him to the pizzeria to order a slice at the window (he’s been returning ever since). And, just as the owners are crossing over the business’ 60th anniversary this year, an entirely new customer base will have the pleasure of enjoying a J&V slice when a new Manhattan location opens up in a few months. 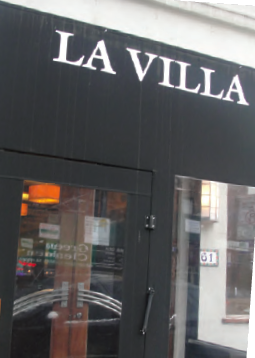 As with many pizzeria operators, Alfredo DiScipio, co-owner of La Villa Pizzeria (lavillaparkslope.com) in Park Slope, says that pizza sauce has been running through the veins of many of his family members for generations. He’s personally been in the pizza business since he was 19 years old and shares the operating duties of three outposts of La Villa with co-owner William Rubin. “We’re a New York pizzeria, but my roots are Italian, so I have Italian pizza with a New York twist,” says DiScipio. “My family is originally from Salerno, Italy, and we take pride in the quality of our ingredients; everything has to be Italian.”

DiScipio believes that one topping is all you need for a great pizza. “We offer all of the toppings,” he says. “But the simplicity is what makes it great. Classic is easy, classic is simple, and classic is delicious.” The grandma pies are topped with San Marzano tomatoes, olive oil, fresh garlic, homemade mozzarella and fresh basil before taking a turn in the deck ovens, while the chewy, 18” Margheritas take a trip through the wood-burning oven to give them a slight char and add the desirable consistency to the mozzarella. Meanwhile, the calzones are made with a thinner crust that allows the flavors of the filling to come through.

With three locations in place, there are no immediate plans for expansion. “For now, we’re concentrating on making things better,” says DiScipio. “People want to get the best bang for their buck, and customers are tough in New York; when you screw up, you hear about it.”​