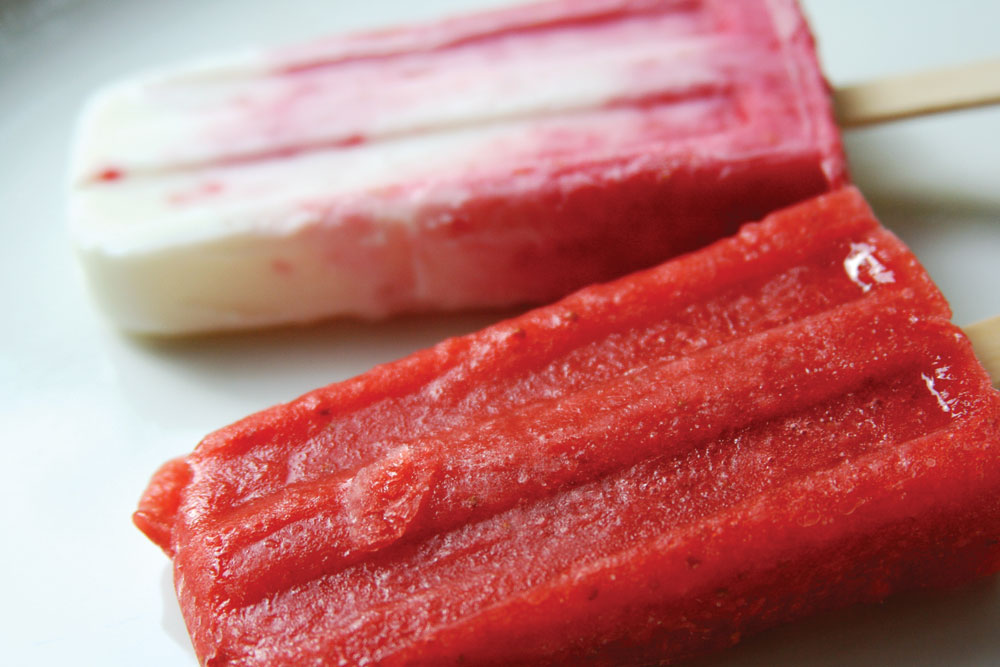 Like Bogart and Bacall or Pitt and Jolie, pizza and a frozen treat make a beautiful couple.

Many pizzerias specialize in the combination, and a national trade show, the North America Pizza & Ice Cream Show (NAPICS), has served the market for more than 10 years. One Philadelphia business, Little Baby’s Ice Cream, even offers a pizza-flavored ice cream—a blend of fresh dairy cream, tomato paste, garlic, oregano leaves and tomato concentrate—in honor of its next-door neighbor, a pizzeria/museum called Pizza Brain. “To be honest, it’s pretty much a gag, but it consistently intrigues and delights people, so it’s more or less a staple on our rotating menu,” says Little Baby’s co-founder Pete Angevine. “I would say that probably 60% of people who come into our shop for the first time try a small sample and then end up ordering a serving of something else—because it tastes a lot like pizza and, really, it’s pretty odd.”

OK, so maybe ice cream and a pepperoni pie are better off as just good friends. Regardless, they’ve got a chemistry that can’t be denied. “Both are craveable and shareable,” says Cathy Manzon, director of marketing for The Loop Pizza Grill (looppizzagrill.com), a Jacksonville, Florida-based chain. “Kids will come in after school or after a sporting event and order a shake and fries. Couples will stop in before or after a movie. It’s a perfect shareable snack.”

Jillian Hillard, marketing manager at PreGel America in Concord, North Carolina, notes that pizzerias typically serve gelato, frozen yogurt and soft-serve—but no matter what the medium, frozen treats are moneymakers. “They can be upsells to any dish, and they can also create a daypart that the pizzeria didn’t previously have,” she says. “For example, frozen desserts on summer evenings can draw a whole new crowd.”

Ray’s offers a variety of palate-pleasing items for kids, who often drive a family’s decision on where to eat. “We created special ice cream treats for our younger customers,” Clancy says. The Mousey Mick features one scoop with Oreo cookie ears, candy eyes and a cherry nose. Children can even construct their own sundae with Ray’s “I’m the Builder,” a scoop of ice cream served with small cups of candies, sprinkles and chocolate syrup, and a single scoop of ice cream is included in every kids meal.

A cookie-based frozen concoction is also a top seller at Mia’s Pizza and Eats (miaspizzaandeats.com) in Cumming, Georgia. Owner Clori Rose-Geiger offers an Oreo ice cream pie year-round. “Some people say it’s the best dessert they’ve ever had,” Rose-Geiger boasts. “It’s a simple recipe that we developed in-house. It’s easy to make, with very few ingredients, and people love it.”
The Loop Pizza Grill offers an old-fashioned dessert experience with hand-dipped shakes and malts, but, even here, cookies still take the cake. “Our Oreo milkshake has always been our top seller,” Manzon maintains. “Even when we introduce a new flavor, Oreo still comes out on top. I’m sure some of it has to do with the popular brand name, and cookies and milk go together so well.”

Ice cream is one of the most versatile frozen treats in the world, lending itself to all kinds of clever experimentation and, from a marketing specialist’s point of view, memorable product names. If you make your own ice cream in-house, you’re limited only by your creativity and willingness to try new things.

When Elton Hyndman took over a former restaurant’s space to open Oscar’s Ice Cream and Pizza Joint (oscarspizzajoint.com) in Baton Rouge, Louisiana, he stumbled upon an ice cream maker left behind by his predecessor—a lucky break, since the machines can cost anywhere between a few hundred and several thousand dollars. “All of our ice cream flavors start out with our basic vanilla custard that we make in small batches daily,” Hyndman says. A typical day’s selection might include peanut butter fudge, Rocky Road and café au lait, as well as vanilla and chocolate.

Meanwhile, fresh ingredients and the changing seasons influence Oscar’s offerings. “We like to use local ingredients as much as we can,” Hyndman continues. “Our dairy and eggs are sourced locally, and they make a big difference. There are two strawberry seasons in Louisiana, so we’d better have a good strawberry ice cream!” The pizzeria also changes up flavors for holidays—such as candy apple or pumpkin pie ice cream for Halloween, or holiday flavors with food coloring for Christmas.

And, every now and then, Hyndman and his staff like to push the ice cream envelope. “You have a bunch of people standing around thinking of silly ice cream flavors, and once in a while you try one out,” he says. One recent example: pancake-and-bacon ice cream. “I’d had some bacon infused into sweet desserts before and thought it was really good,” he recalls. “We had some good maple syrup, so all we had to do was come up with a good pancake recipe. It was interesting—not for the faint of heart, that’s for sure!” 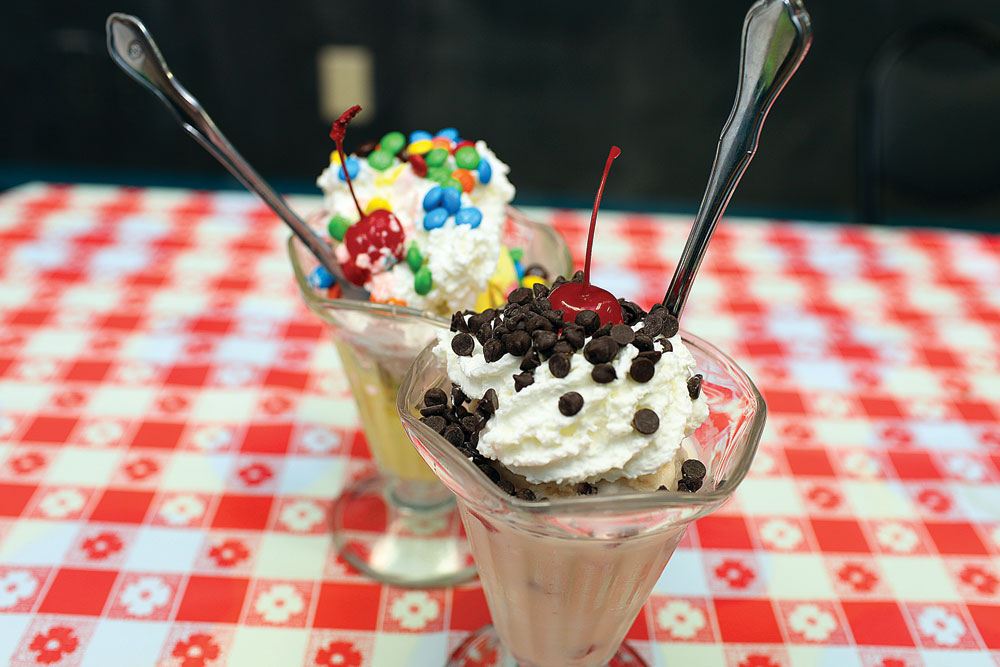 Soft-serve ice cream is another customer favorite. The only major difference between soft-serve and “hard” ice cream is that the former is served at a warmer temperature. “Soft-serve ice cream is very popular with pizza buffets,” says Jamie Schwartz, the product marketing manager at St. Louis, Missouri-based Kent Precision Foods. “With a marketing angle that encourages customers to ‘save room for dessert,’ operators can see the profitability of their buffet increase as customers indulge less on the more costly pizza offerings and more on soft-serve desserts.”

Self-service soft-serve machines enable customers, especially kids, to create their own treats. With customizable machines, you can serve multiple types of products at the same time with the push of a button, so your customers have a range of choices and can swirl flavors and types together. “The biggest advantage of the soft-serve machines over the traditional cases is the footprint,” says Dan Doromal, director of marketing at Donper America in Orlando, Florida. “One soft-serve machine can serve ice cream as well as frozen yogurt, custard, sorbet and gelato—all within a 2’-by-2’ area.”

“Soft serve—and ice cream in general—is a destination dessert,” Schwartz concludes. “Operators will very often see traffic increase throughout the day as consumers go out for a frozen treat.”

Ice cream may be a pizzeria staple, but it’s just the beginning. Pizzerias around the country serve a veritable smorgasbord of ice-cold treats. At Russillo’s Pizza and Gelato (russillospizza.net) in Yakima, Washington, customers often visit just for the handmade gelato. “We have six flavors that we always display: Oreo, pistachio, chocolate, cheesecake, strawberry and birthday cake,” says general manager Curry Cates. “During the spring and summer, we start to experiment a little. Some of the odd flavors that people like are maple bacon, chili chocolate, cinnamon basil, bourbon and balsamic strawberry.”

Ray’s has had success with smoothies and slushes, along with a signature frozen beverage called the Sherbet Spritzer, featuring orange sherbet and seltzer. “These items have been a nice addition to our ice cream menu and have increased our sales,” Clancy observes. “They’re a good complement to the pizza we make, and they leave enough room to eat a lot of pizza.”
Smoothies in particular have become trendy in recent years, Schwartz notes, citing a Mintel study in July 2012 that showed 71% of respondents like to order smoothies as snacks. “This can bring traffic into an operator’s establishment throughout the day,” she says. “And, according to Mintel, the average smoothie price is $4.92. With just a blender, a smoothie base and some frozen fruit, operators can see more than a 50% gross margin.”

Frozen yogurt has its fans, too. “Both full-service and quick-service restaurants are now offering cannoli filled with various frozen yogurt flavors,” Doromal says. “These desserts have been a hit in Italy, and we are now starting to see it more and more in the United States. As far as flavors are concerned, we’ve seen shops lean toward more unique flavors such as sea salt caramel, pistachio, cappuccino and white chocolate truffle.”

At Mia’s, frozen fruit pops are just the ticket on a sultry Southern day. “We make them in the late spring and throughout the summer, when the fresh berries are at their best,” Rose-Geiger says. “We make small batches, about 16 of each flavor at a time, and we don’t carry them for very long. If the fruit isn’t available locally, we won’t make the pops.”
Mia’s top-selling fruit pop flavors include blueberry lime, strawberry, and blackberry or raspberry yogurt. “Ice pops are quite easy to make but require a bit of time and patience,” Rose-Geiger says. “The process takes a few steps: making the filling, freezing, and moving them from molds to baggies. But when people come in for pizza, the pops are a nice surprise, especially since we carry them as local specials rather than year-round. We always sell out of our batches.”

So what’s the key to selling frozen treats in a pizzeria setting? “A picture says a thousand words,” Manzon notes. “We often display beautiful photos of our shakes on the wall, next to the order counter or right on the counter itself so that all the guest has to do is point to it. It’s a proven fact that whenever we display pictures of our milkshakes, we sell more.”

Clancy agrees with that approach. “The more our customers see, the better the ice cream sells,” he says. “We take pictures of our special frozen desserts.” Clancy uses two display cases to show off his 16-plus flavors of ice cream. Guests often can’t resist the temptation, even if they came in just for pizza, he says. And to bring customers through the door in the first place, Clancy offers ice cream specials and advertises with coupons and e-mails to current customers.

At Oscar’s, Hyndman occasionally offers coupons that feature ice cream, such as a free small dish with the purchase of a pizza. Sampling can pay off, too. “We give a taste spoon to anyone who will take one,” he says. “I offer it to all of the tables I wait on by saying, ‘Which one of our ice cream flavors would you like to try today?’”
“In new markets, the best way to market our shakes is to sample them,” Manzon agrees. “We pass out small samples of the different varieties for the guests to try. Once they try them, they’re hooked!”

The key is to develop frozen treats that make sense with your existing menu, Hillard concludes. “Make sure it fits in with the integrity of the brand and its offerings,” she adds. “If businesses pride themselves on high-quality pizza, the same should be said for their desserts. Well-thought-out additions should complement the existing lines.”

And who knows? Maybe you’ll hit on your own recipe for pizza ice cream like Little Baby’s. Angevine says his team developed the treat to honor neighbor Pizza Brain’s induction into the Guinness Book of World Records for its collection of pizza-related memorabilia. “Some folks think it’s funny, some think it’s gross, but some absolutely love it and come in once a week like clockwork to order a pizza milkshake,” he says. “There are a brave few who order a ‘Frankford Avenue Taco,’ which is a slice of pepperoni pizza from Pizza Brain with two mini-scoops of pizza ice cream on top. It’s wild!”