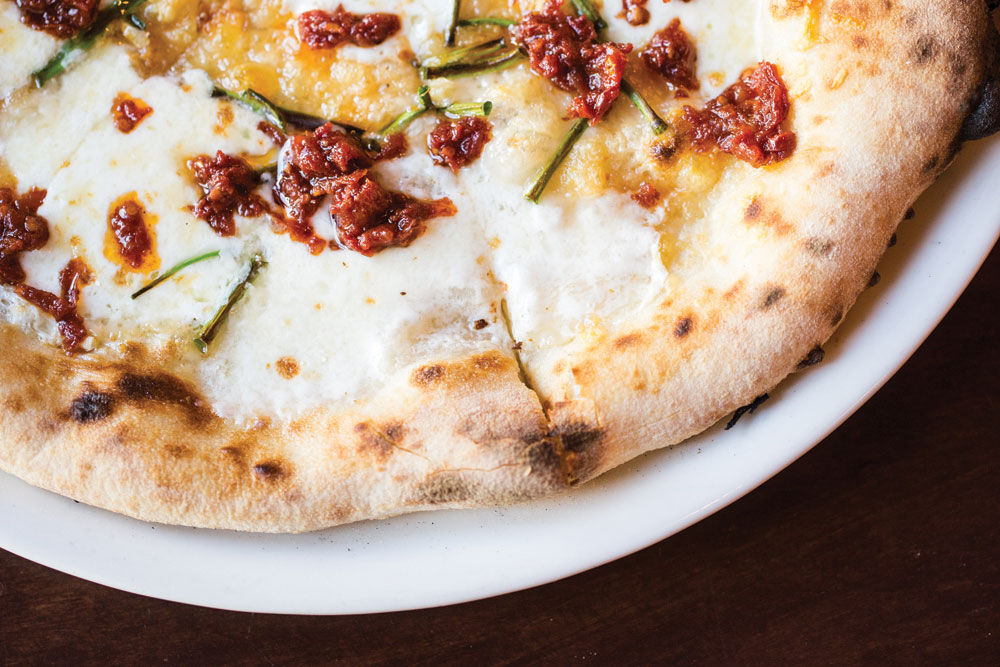 Everybody knows that pepperoni is America’s No. 1 pizza topping, but it’s far from the only topping. There are a growing number of items that consumers simply cannot resist when they spot them on a pizzeria menu. And as more ingredients become available through local suppliers and Italian exporters, the list of toppings continues to grow, to the delight of pizza consumers everywhere.

With that in mind, PMQ has scoured dozens of menus to find some of the hottest toppings being offered across the country. We also asked chefs and operators how quickly the pies made with these specialty toppings are flying out of their ovens.

It’s hard to resist a potato-topped pizza, especially when today’s chefs are getting so creative with their topping methods: thin-sliced, fried, tater tots, au gratin, mashed, and more.

La Bella Pizza Bistro (labellapizzabistro.com), located in New Paltz, New York, has been offering its Potato Au Gratin Deep Dish pizza—featuring mashed potatoes, caramelized onions, cheddar, mozzarella and Parmesan cheese—for 15 years, according to owner Maria Lisanti. “We were just playing around in the kitchen one day, trying different toppings that would fill a deep-dish pie,” she says. “The mashed potatoes were a perfect fit.” Because the pizza takes 45 minutes to bake, Lisanti says she sells the decadent pies mostly by the slice, which some customers top with bacon, broccoli or sour cream. “We go through about five pies a day, which equates to 210 slices per week,” she says.

Most would agree that pizza isn’t pizza without mozzarella. So when you heighten the experience by swapping out traditional shredded mozzarella for the fresh, hand-pulled variety, it gives your pizza an entirely new taste and appeal.

Owners Colton Soelberg and Joseph McRae spotlight simple local foods at Pizzeria Seven Twelve (pizzeria712.com) in Orem, Utah, including their hand-pulled mozzarella offered on three of the pizzeria’s signature pizzas, one of which is finished with tomato sauce, garlic, ricotta, Grana Padano and red pepper flakes. Chef Stephen Lott says the pizzeria team decided to start making their own hand-pulled mozzarella when they weren’t able to find a supplier for buffalo mozzarella. “We sell around 500 pizzas per week topped with the hand-pulled mozzarella,” Lott says. “The customers love it, and hand-pulling the mozzarella doesn’t really take a lot of extra time.”

“When you combine cauliflower, olive oil, garlic, salt and pepper and roast it in the pizza oven, the cauliflower becomes crispy and produces a nice charred flavor.” —Matt Culbertson, Radius Pizza

Everyone has seen broccoli on pizza, but now a growing number of pizzerias have added cauliflower to the topping lineup. In fact, you may be surprised at the interesting flavors you can pull out of this vastly underrated vegetable when a pizza oven is allowed to work its magic.

At Washington, D.C.-based Radius Pizza (radiuspizza.com), where two of the 10 specialty pies feature cauliflower, co-owner Matt Culbertson says he chose to add it as a topping because it’s one of his favorites. “When you combine cauliflower, olive oil, garlic, salt and pepper and roast it in the pizza oven, the cauliflower becomes crispy and produces a nice charred flavor,” he says. “It’s a healthy addition to our pizzas and adds a nice texture.” After eight months on the menu, Culbertson estimates that patrons purchase approximately 30 cauliflower-topped pies per week.

Fans of the Flame

Whether it’s spicy sausage, hot sauce, red pepper flakes or hot peppers, you can always count on some customers craving a little added heat with their pizzas. Pizzerias have been quick to answer the call with plenty of tongue-burning, tear-inducing pies for fans of the flame.

The Sunburn pizza at Slyce Pizza Bar (slycepizzabar.com) in Indian Rocks Beach, Florida, was inspired by other restaurants’ menu items that promised to be hot and spicy but fell short of the hype, say Slyce co-owners Ken Gillespie and Jack Bennett. “We sell 60 to 70 of The Sunburn pizzas per week,” Gillespie says. “In fact, some of our customers drive more than 100 miles for it.” The specialty pie is topped with hot sopressata, Cajun sausage, hot Italian sausage, pepper jack cheese, jalapeños, green olives, fresh serrano chilies and green onions; Bennett says the combination is uniquely tasty, with the green olives adding just the right bit of saltiness, and the heat level is customizable according to each guest’s taste.

There’s something about egg on a pizza that just seems so right, no matter what time of day it happens to be. The yolk blends perfectly with melted cheese, a savory sauce and an airy crust, making its growing popularity on pizzeria menus no surprise.
Soleto Trattoria and Pizza Bar (soletorestaurant.com), a chic Italian restaurant in downtown Los Angeles, has been serving its Potato, Bacon and Egg Pie since the restaurant opened in July 2012, according to executive chef Sascha Lyon. “The Potato, Bacon and Egg Pie has been on my mind for 20 years,” Lyon reflects. “The first time I experienced it, in the true Sicilian fashion, was in the basement kitchen of one of my best friends’ parents’ house in Queens, New York, at about 2:30 a.m. on a New Year’s Eve. His mother was making potato pizza for the New Year, as was tradition. Her pizza was simple, comprised of fluffy, yeasty Sicilian pizza crust, potatoes, onion and oregano. In my version, I add bacon and egg to make it particularly indulgent and more my style.”

While Lyon says the pie may not be as popular as some of the more mainstream options, Soleto still sells about 100 Potato, Bacon and Egg pies per week to its hungry fans.

A Surge of Sprouts

Cover the kids’ ears for this one: You’ve probably noticed a surge of Brussels sprouts on restaurant menus in the last few years as this oft-disparaged veggie is now enjoying its moment in the limelight. It was only a matter of time before they made it onto the pizza menu, and for good reason—they taste great!

At Motorino (motorinopizza.com), with locations in New York and Hong Kong, owner Mathieu Palombino was looking for something different when he opted to include his Brussels Sprouts pizza on the menu. “Everyone loves Brussels sprouts in New York, especially ladies,” he says. Motorino sells about 1,000 per week of the pizzas, which are topped with Brussels sprout leaves, fior di latte, smoked pancetta, Pecorino, extra-virgin olive oil and garlic, says Palombino. “It takes hours of work every day to cut the bases and separate all of the leaves individually,” he says. “But it’s very fresh, with a light snap; paired with the other ingredients, it becomes one big, juicy flavor.”

Once someone has experienced burrata, the Italian cheese filled with mozzarella and fresh cream, there’s really no going back. Slicing it open to reveal the decadently creamy interior and enjoying it with a little olive oil and cracked pepper or atop a fresh-from-the-oven pizza is many a pizza lover’s dream come true.

“I first had burrata in 2002 and lusted after it until I finally had it in my hands,” says Brad Kent, executive chef at Olio Pizzeria & Café (pizzeriaolio.com) in Los Angeles. “Since then, it has been a love affair that I believe will last a lifetime.” Kent has been using burrata on pizza since 2002 and has had it as a staple on Olio’s signature pizza, the Margherita Plus, since Olio opened in 2010. The pizzeria sells approximately 200 burrata-topped pizzas per week, he notes. “Burrata is not difficult to find locally, since we are lucky enough to have two exquisite burrata cheese manufacturers in Los Angeles,” says Kent. “The local product we use has a shelf life of about five days, and we choose to use all of our fresh cheeses, including fior di latte mozzarella and locally made ricotta, within three days of manufacture for the brightest and sweetest dairy flavor.”

“Nutella is one of those classic Italian products that I knew I wanted to incorporate into the dessert menu in some way. I tried about 10 different combinations and knew immediately when I had the winner.”
—Sharon Ardiana, Gialina and Ragazza

Nutella has been a popular staple in Italy since the mid-1960s, and its delicious combination of chocolate and hazelnut can be enjoyed on everything from toast to fruit to pizza. Pizza chefs in the United States have only recently caught on to its delectable versatility, but, as the number of Neapolitan-style pizzerias have grown, so have the number of Nutella-topped pies.

Sharon Ardiana has been utilizing Nutella at her San Francisco-based pizzerias Gialina (gialina.com) and Ragazza (ragazzasf.com) since they opened in 2007 and 2010, respectively. “Nutella is one of those classic Italian products that I knew I wanted to incorporate into the dessert menu in some way,” she says. “I tried about 10 different combinations and knew immediately when I had the winner.”

The pizza, which combines Nutella, mascarpone and Amaretti (an Italian almond-flavored macaroon), generates about 50 orders per week at Gialina and 20 per week at Ragazza. As for the inspiration behind the unique combination of toppings, Ardiana explains, “I remembered an ice cream cone I had in Siena, Italy. The inside was swathed with gianduja (hazelnut chocolate), the cone was the crunch, and the ice cream was the creamy part.” Since she didn’t want ice cream melting on the pizza, Ardiana swapped out the ice cream for mascarpone, which she fashions to resemble soft-serve vanilla, and adds Amaretti—one of her favorites—for crunch.

“It’s not a single-size dessert,” Ardiana adds. “It’s a commitment that the whole table must make. But, like regular pizza, it’s also great the next morning!”