As many entrepreneurs will tell you, the current business climate is a bit hazy for those who wish to borrow capital to finance a restaurant. To break into the pizza business these days, especially with an eye toward franchising and owning multiple stores, takes not only money, but a will of steel. During our research on franchising, we discovered there are many different paths to success, but all of them require one constant: a willingness to eat, sleep and drink your franchise for the first couple of years.

To offer some specific insights into the world of franchising, we’ve broken down our investigation into three crucial areas. These three factors have to be at the forefront of any franchise plans: financing, location and training.

You can find many ways of financing your opening of a first, second and even third store. Some operators we spoke with sold a business to finance their pizza foray. Others had a partner to help split expenses. Others—the vast majority—had to seek the help of banks or other lending institutions. A quick search of the Internet will reveal dozens of banks and financial lenders. One of the best resources we found was the 2007 Finance Directory from Franchise Times, with its annual listing of banks and lenders (http://www.franchisetimes.com/content/story_result.php?article=00529).

Pamela Billow comes at the issue of franchising from, as she says, both sides: She is not only a franchisee for Marco’s Pizza (www.marcos.com)—she owns two stores, with more pending—but she’s also the area rep for Marco’s in the Las Vegas area. She’s seen the aforementioned lending climate become stormy as of late. “Two years ago, people had acquired so much equity in their homes, they became wealthy from that equity and could draw on a home equity line of credit to finance expansion,” Billow says. “Of course, with the home credit crunch, that’s not true anymore.”

She points out that most lenders are looking for at least a 30% down payment from the franchisee. “They want you to have that much, at least, invested in your business.”

Billow says that securing financing is one reason a prospective franchisee might want to work with an established chain, rather than going it alone. “These lenders are going to be more comfortable working with you if you’re associated with a company with a proven track record. A large chain will have preferred lenders in place.”

Chad McElmurry opened a Hungry Howie’s (www.hungryhowies.com) franchise in Indianapolis in 2003 without having to go to a bank for excessive loans. He says the modest initial investment required—$160,000—made it feasible for him and his thenbusiness partner to open their store. “The price definitely made it attractive for us,” he says.

Jason Pesola, marketing director for Bellacino’s (www.bellacinos.com), a 91-unit chain based in Portage, Michigan, has seen numerous franchisees take the plunge. He agrees financing can be difficult, but not impossible. “If you’re dealing with a mom-and-pop operation, we always recommend that our prospective franchisees work closely with the Small Business Administration,” Pesola says. “We have a good working relationship with them. This is good for store No. 2. We can help get that off the ground. When you start talking about stores three, four and five, that’s more of a wait-and-see type of deal.” He says the company maintains the philosophy that the first store needs to be fully operational before a second store (or third and fourth) is contemplated. 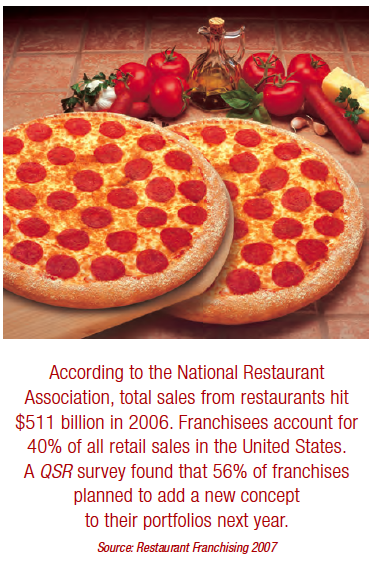 Gary Bardwell owns a Manny & Olga’s (www.mannyandolgas.com) pizzeria in Lake Gaston, North Carolina. Bardwell had a small business in the D.C. area when he taught at Georgetown University. The proceeds from the sale of that business, as well as borrowed money, helped finance Bardwell’s move to Lake Gaston and his purchase of a Manny & Olga’s. He concurs about the tough lending climate but says it didn’t prevent him from securing his loan. “It wasn’t easy, but we’re in a small community here, and my wife and I know all of the bankers personally,” he points out. “I also put up a piece of property as collateral. To get us up and running, I’d say, was around $150,000.”

The old phrase “location, location, location” is well-known in the restaurant biz, but just what are the criteria for a good location? Billow says Marco’s Pizza uses a service called Map Info (www.mapinfo.com) to help franchisees. “Marco’s Pizza feeds Map Info all possible demographics about a proposed location,” she says. “Map Info takes that information and creates an ideal location, based on that info, for 3,000 Marco’s sites across the country. It’s really amazing.” Billow says, using the data, the company can pick out a specific desired location—what the company calls its “trade area”—and begin to develop it.

Pesola says the criteria for location depends on what the franchisee is looking for and what the concept is. He says to place a Bellacino’s, the company is looking for maximum ingress and egress of cars, as well as strip centers with a large grocery store or another large chain as an anchor. “Kroger and Wal-Mart are good,” he says. “With a Home Depot, the numbers skew higher in our subset of stores.”

McElmurry agrees with locating near a strip mall. “I’ve found the traffic around strips to be desirable and manageable,” he says. “I also like being on the ‘going home’ side of the road.” Bardwell says he sought out his lakeside location himself and has adapted to his surroundings. He even has a pizza boat that makes deliveries. “This is the first year we’ve run it,” he says, “but I would say on a busy summer afternoon, we’ll sell probably 50 or 60 pizzas off the boat itself.”

Bardwell points out the boat stays put, so patrons come to it. “I don’t run up and down the lake,” he says, citing fuel prices and the fact that Lake Gaston is a 20,000-acre lake.

Once financing and location are nailed down, hiring and training solid workers who care about your business make up the third leg of the tripod. Without a trained staff to cook the food and run the business, it can topple over. McElmurry says he benefited greatly from all of the training provided by the corporate office of Hungry Howie’s. “I personally did five weeks of training at the corporate office in Detroit. Then we had a corporate rep come down to Indianapolis the first two weeks we were open and help out. I was the sole manager that fi rst year, which was a little rough, but I saw exactly how the store needed to be run. Now, when I deal with my managers, they know I’ve done their jobs before.”

Billow says she and her husband run “ownership seminars” for prospective franchisees. “We explain everything, from costs and what is involved with training to what kind of sales to expect.” This latter point, Billow says, is probably the most frequently asked question she gets from franchisees. She says she can’t make earnings claims but points franchisees to where they might find results to compare.

“We send them to the UFOC (Uniform Franchise Offering Circular),” she says (http://www.franchise411.com/fpi/ufoc.html). “They can compare Marco’s in a similar part of the country. They’re even free to call up a Marco’s franchisor and ask for information. There is a way to ask for sales information without being overbearing, and most Marco’s franchisors are proud of the brand and would share the information.” (Billow says, using this comparative method, a prospective franchisee might expect approximately $600,000 in sales in the first year.) Pesola says that Bellacino’s offers solid management training through its franchisee handbook but doesn’t stop there. “A handbook isn’t enough,” he says. “We help them hire management. We have a training program that involves three to four weeks at a regional site, then a two-week training program on the actual site. We don’t want to open a store and let it crumble. If a store opens at lower volume, we work even harder.” 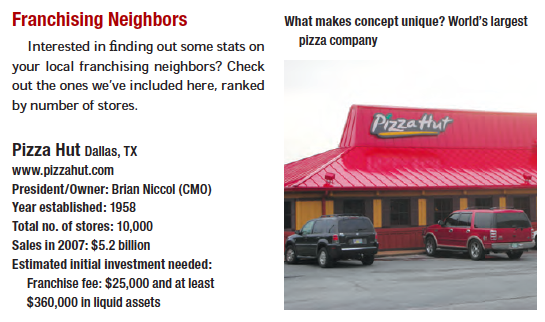 Everyone we spoke to used the word “passion” when describing the attitude a potential franchisee must possess. McElmurry started with the goal of eventually having 10 stores. He currently has four and counting but says he learned that if his partner didn’t share his passion, the business wouldn’t work. “One of the main things I’ve learned is, it’s not a job—it’s really your life,” he declares. “You’re actually thinking about it all day and all night. You’re dreaming about it. My ex-partner wasn’t prepared to give it that kind of attention, so I bought him out.”

Pescola agrees. “My No. 1 bit of advice: Do your homework. Make sure the concept you’re considering dedicating your life to is a good fit for you. This isn’t the place for a fly-by-the-seat-of-your-pants experience.”

“The jump to the second store is probably the most stressful, rather than the opening of store three or four,” says Phil McCabe, owner of three Sal’s Pizza (www.sals-pizza.com) locations in Massachusetts. “You’ve spent all of your time and energy in the fi rst store, and suddenly you realize you can’t be in two places at once. I’m lucky because my wife works with me, so when I’m at one store, she’s at the other. I try to spend 20 hours a week at each of the three stores.” Despite being pulled in three directions, McCabe says he’s looking for a fourth location. He says the work suits him because it doesn’t involve going to the same office day after day and performing the same task. “It’s not monotonous,” he says. “You’re working for yourself, and every day is different.”

Bardwell, who started with no experience at all in the food business, is still flying, though not by the seat of his pants. Despite being in business for only one year, he feels he has a handle on what it takes. “You really have to watch your labor and food costs,” he asserts. “You figure that out pretty quickly, or you’re going to be hurting.” Bardwell is looking forward to having three stores open in five years, with a new store to open every year after that. His goal is to have six to eight stores eventually. He also says he intends to have solid plans for a third store before he opens his second. “That third store is where you start making your profi t, so you need to have it in mind before you pull the trigger on the second.”

Obviously, everyone’s experience—and franchising philosophy—is different. Franchising isn’t a one-size-fits-all proposition. Variables such as geographic location, population, competition, research, financing, more research and mental attitude all play a role in successfully franchising a business. The good news is that, even in tough economic times, a determined franchisor can find a way. 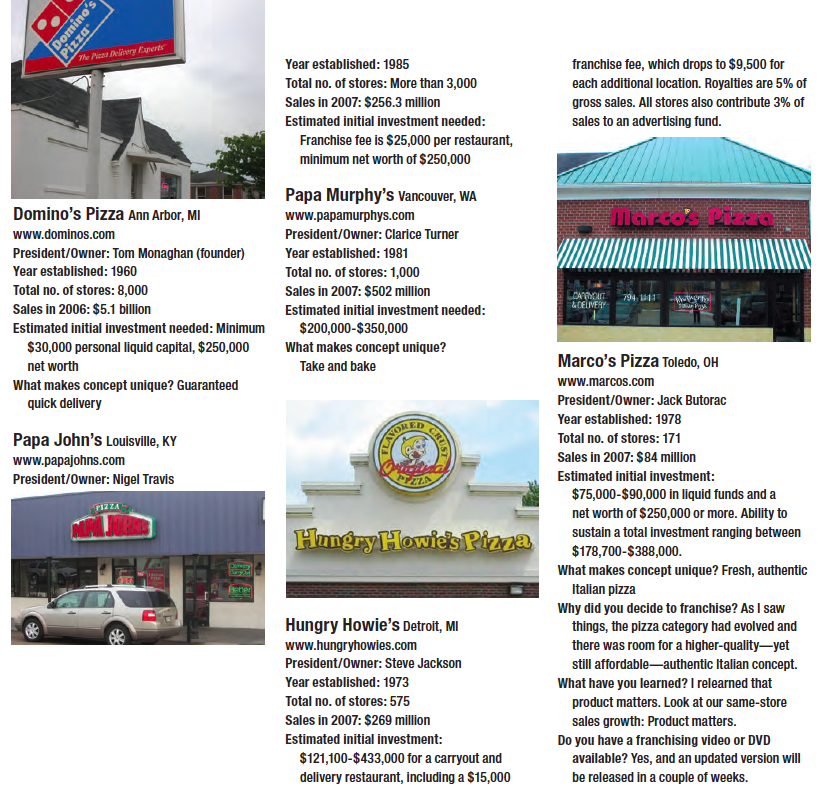