Dorothy Schueffner doesn’t believe in fancy advertisements, direct mailers, TV or radio spots or email marketing. She doesn’t even use her POS system to keep track of return rates. She has, however, been in the pizza business over 15 years and has significantly increased her yearly earnings since her pizzeria first opened.

When Falls Firehouse Pizza opened in 1987, Dorothy had six employees and only sold two pizzas the first night. She later increased her sales, earning $90,000 her first year.  She now has 45 employees and sales reached $700,000 last year alone. 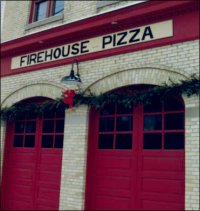 Dorothy has a grass-roots approach to marketing. She focuses on in-store specials featured through chalkboard and tabletop advertising. She uses these techniques in her town’s old firehouse that she helped transform into a hot spot for tourists and locals alike. Now the sole owner and president of Falls Firehouse Pizza in Sheboygan Falls, Wisconsin, Dorothy never imagined how successful the pizzeria would be. Here’s her story.

A historic city of just over 7,000 residents, the Sheboygan Falls area has turned into a tourist attraction. Dorothy has aided and gained from this development by turning her town’s old fire station into a modern pizza parlor. Her pizzeria has undergone much restoration and expansion. By moving into the old schoolhouse next door, Dorothy was able meet the demand of more customers by expanding her seating from 50 to 150, which added significant sales.

“I figured a 25 percent increase in sales, and in fact, we had a 50 percent increase the first month,” Dorothy says. “It continued to grow without much advertising. We give value – people return and bring their friends. It seems like a simple concept, but it works.” 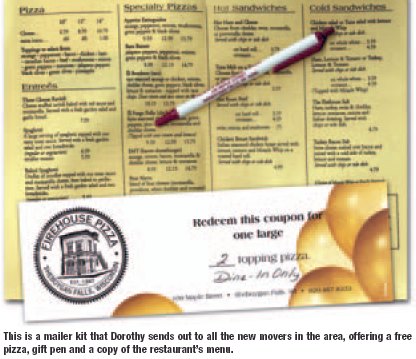 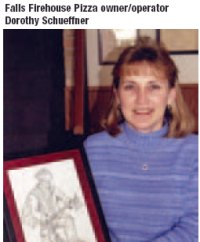 Dorothy has also created three themes in her restaurant. Each theme stays with the history of the buildings. It once housed a firehouse, bicycle shop and schoolhouse. Dorothy’s three sons brought the pizzeria to life by using period pieces to decorate each dining area. Dorothy’s middle son, Eric, is not only the vice president and secretary of the pizzeria, he is also a graphic designer and included the history of the buildings as sidebars in the menus he designed for her. She says having her family involved has added to the success of her business. Residing in an apartment above the pizzeria has been beneficial for Dorothy as well.

The upstairs dining room has a schoolhouse theme a nd is used for private parties, overflow dining and weekend rush hours. The upstairs includes a bar and is only staffed with a bartender and one waitperson. Because the kitchen and upstairs dining room are so far away, Dorothy created a separate menu for the upstairs. The modified menu includes all pizzas, appetizers and beverages. People who are in a hurry during rush hours have the option of dining in the upstairs instead of waiting 30 to 45 minutes for a regular table.

To make specials known to customers, Dorothy uses chalkboards, one placed by the entrance and one inside the restaurant. These boards are also quite handy she says, allowing her to change specials with ease daily. 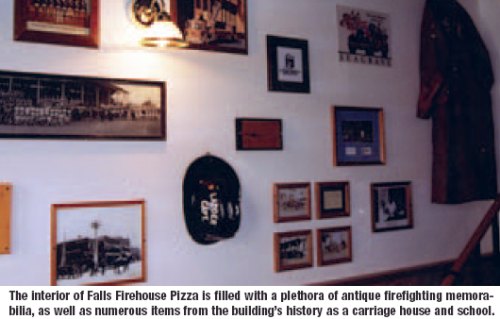 “Many of our regulars don’t even look at menus, so we really need to have the chalkboards visible,” Dorothy says. “I use the boards because I don’t like a lot of things detracting from the overall décor and how the restaurant looks.”

Dorothy offers a Monday night special making it a popular night out for pizza. The promotion is called the BOGO special, or a “Buy One, Get One,” where customers can buy one pizza at full price and get a second pizza of equal or lesser value for half price.

“We don’t even advertise the special because people are used to it. But when you surprise somebody when they get their bill, and they didn’t even know we had the pizzas on sale, they’re thrilled,” Dorothy says. “We have many customers who order for their family every Monday. We also have people plan get-togethers with large groups to take advantage of the lower prices.”

Pizzas are Dorothy’s best sellers. She makes anywhere from 700 to 800 of them a week. Nearly 59 percent of her sales are from pizza.

Falls Firehouse Pizza is known for its specialty pizzas.  Every pie on the list is somehow connected to fire, the main theme of the restaurant. The first and most popular item on the menu is the “Appetite Extinguisher,” a deluxe-style pizza with sausage, pepperoni, onions, mushrooms, green peppers and black olives.

Dorothy has several specialty pizzas on her menu and features one every night of the week to boost sales of pies that may not be as popular as others. She discounts the featured pizza by one dollar.

“I find suggestive selling, table tenting and all of those little things are effectiive. If you just promote something, people are more likely to try it. It works well,” Dorothy adds.

The specialty pizzas can be ordered in three sizes, 10-inch, 12-inch and 14-inch. The best seller is the 14-inch large. The prices of the specialties differ. The 10-inch pizzas are around $8 to $10, and each pie increases two to three dollars as the sizes go up. Six of the nine specialty pizzas have six or more toppings.

Dorothy’s nine fire-themed pizzas are not all hot. Some of the names can be misleading, but she has solved that by listing out the ingredients used in each pie. 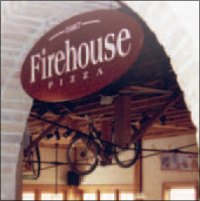 Dorothy participates in a “Welcome Newcomer” program sponsored by the Sheboygan Falls Chamber-Main Street organization, a group she is also an active member in. The program gives a gift bag to new residents of Sheboygan Falls. Dorothy says she only pays an annual fee of $30 to participate, and it is the responsibility of those who participate to continue to provide the gifts to the Chamber office as needed.

“I give a coupon for a free pizza, a copy of my menu, a personal, handwritten note signed by me and a pen with our phone number on it.  We must supply 50 at a time, so it takes me a while to get this ready, but I think people are impressed with the personal touch,” Dorothy says. “It has been very successful. There is a high rate of return because it is a free pizza, and people who are new in town usually want to try out the local pizza place.”

Another way Dorothy markets her pizzas is through a program offered by Grande Cheese. She says they offer a 100-percent marketing program to customers who purchase their cheese exclusively from them. “They have provided us with large posters, many with appetizing pictures of pizzas, telling that we sell only the best products because we care about quality. They also provide us with games for children, table tents, banners, place mats and a variety of other things at least twice a year and are always new looking and very high quality.”

She also receives a frequent customer card from Grande. She uses it as a reward to her regular customers.  The promotion is a “Buy 12 Pizzas, Get One Free.”  They have a year to complete the card.  She says it has been pretty popular.  For the seven months she has done the program, she has had about 20 people redeem their card for a pizza.  Once they finish the card, she plans to use them as a tracking system and may use the database to do mailers.

Dorothy also does a lot of giveaways. She often donates coupons to local schools and charities for various fundraisers.  If it’s for a cause she really believes in, Dorothy says she gives away coupons for a pizza-a-month for a year.

“I find that rather than spending a lot of money on advertising, getting coupons or specials out into the hands of people at virtually no cost gets you new customers.  And that’s what’s important – to get them in the door to try it out.”

Though she does not like to do newspaper ads, Dorothy does put an ad in local hotel directories to attract tourists to her restaurant. In the advertisement, she includes a promotion that says  “Mention Your Hotel and Receive a Free Order of Garlic Bread.”  “When I know they’re here for the first time, I tell whoever is waiting on them to make sure that everything goes well because I want them to have a wonderful experience,” Dorothy says.

It’s a known fact that beer and pizza go well together, and Dorothy has tapped into that concept. She offers nearly 40 alcoholic beverages, including beers on tap, bottled beers, ales and a variety of wines and wine coolers. With such a wide selection, Dorothy averages $3,000 a month in alcohol sales.

“We try to move the beer that we have an overstock of or ones that have not sold so well,” she says. “Doing a special on that in the evening seems to help move our stock, so nothing is getting outdated. Just putting the table tents out with the specials usually increases the sale of the product. People love to buy what’s on sale. The local beer distributors also put my logo onto posters and table tents to introduce new products. These items cost me nothing because they promote their products.”

One marketing product Dorothy used was a banner promotion offering 12 “Inferno” (or hot) wings and a 60-ounce pitcher of beer for $10. However, she says the promotion was not a hit. She no longer sells “Inferno” wings, only mild and medium varieties.

On the back of Dorothy’s main menu is a “Kid’s Menu” for children 10 and under. Each entrée is $3.39 and includes a choice of small soda, lemonade or milk. “We’ve had a kids’ menu for quite some time, but it was previously on a separate menu. We added it back to the (main) menu after determining what were the kids’ favorites.”

The most popular kids’ entrées added were spaghetti, macaroni and cheese and a mini pizza, which is a six-inch version of Falls Firehouse’s original thin crust. If a child is craving a non-Italian selection, he or she can have “Chicken Giggles with Smiley Potatoes.” The Italian dishes come with a breadstick, and each entrée comes with a choice of applesauce or pudding as a dessert.

Also on the “Kid’s Menu” are “Kids Appetizers.” They can get smiley potatoes at six for $1.19 or 12 for $1.99.  Many times children are often hungry before their meal, and giving an appetizer selection for kids is a great way to keep them happy and it allows their parents to order their own appetizers. The children also feel more grown up.

Dorothy also offers coloring sheets and crayons, as well as a pizza game for youngsters.  She knows families often look for restaurants that cater to children. “Being child-friendly is a big part of the pizza business.”

“My marketing plan is really simple.  I try to treat my guests as I want to be treated. It does no good to spend thousands of dollars on advertising if you don’t make a good impression on your new customers. I teach my employees to be honest, friendly and tolerant out front. I teach the kitchen to make each pizza special and as near perfect as possible. We have fun together, and it rubs off on the customers.”

“It doesn’t happen overnight,” Dorothy says. “You have to be patient because it’s a gradual process. Your business will grow if you do it well.”