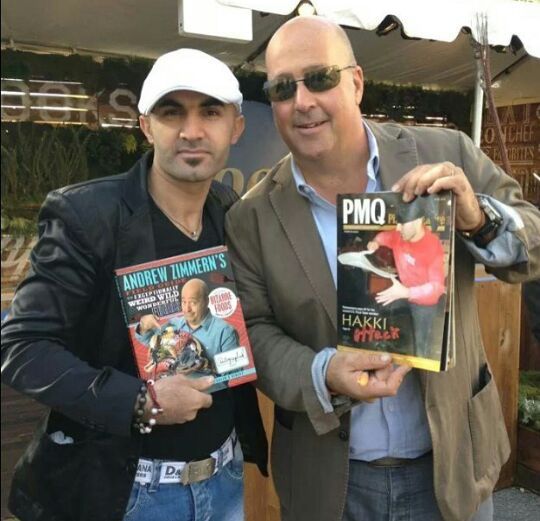 Hakki Akdeniz (left) poses with celebrity chef Andrew Zimmern, who holds up a copy of PMQ Pizza Magazine featuring Akdeniz on the cover.

Pizza maker Hakki Akdeniz lived for months in a skid-row homeless shelter before finding success in the pizza restaurant industry. He now owns Champion Pizza, a small chain of five shops in New York and has even been featured on the cover of PMQ Pizza Magazine, but his compassion for those living on the streets of the city has never wavered, as attested by a recent New York Times profile.

In the wake of the recent murder of four homeless men in the Chinatown area, Akdeniz started leaving boxes of hot, fresh pizza daily at memorials created for the victims. He also included a heartfelt note at each site: “I wish with all my heart that I could have been there at that very moment to protect all of you guys. You know me as the pizza guy. As a former homeless man, I know the struggle that all of you guys went through every day.”

Akdeniz, a Kurd, emigrated to Canada from his native Turkey when he was young and worked in his brother’s pizza shop for several years. He later moved to New York with just $240 in his pocket. He had planned to stay with a friend, but when the friend withdrew the offer, Akdeniz found himself spending his hard-earned savings on a dingy motel on 42nd Street. Before long, he’d run out of money and ended up sleeping several nights in Grand Central Terminal before moving into a homeless shelter called the Bowery Mission.

He spent 96 nights in the shelter, working in the kitchen and looking for a pizza-making job. He eventually landed a position washing dishes at a pizza shop in Hoboken, New Jersey. In 2005, he was working in a New York pizzeria when he met PMQ Publisher Steve Green, who’d shown up looking to buy flour for a U.S. Pizza Team (USPT) competition at the PMQ-sponsored New York Pizza Show. Green convinced Akdeniz to try out for the USPT, and the young immigrant proved quite skillful as a dough-spinning pizza acrobat.

By 2009, Akdeniz had scraped up enough money to buy a small pizza shop, which he called Hakki Pizza, in the Lower East Side. He won a USPT competition at the New York Pizza Showcase in 2010, snagging three first-place medals (Freestyle Acrobatics, Fastest Pizza Maker and Largest Dough Stretch) and marching with the USPT in Macy’s Thanksgiving Day Parade that same year.

After he appeared on the cover of PMQ’s April 2010 issue, Akdeniz went on to open multiple pizza shops around New York City, but he remained a passionate supporter of New York’s homeless community while also championing other causes. He’s well-known for passing out free slices to the homeless in Chinatown and the Lower East Side and for arranging for them to get haircuts at a local barber shop and to take showers at a local gym, all at his own expense.

In 2018, Akdeniz made headlines for his 40-pound cheeseburger pizza, charging $2,000 for each pie and donating the proceeds to charities assisting the victims of Hurricane Florence in North Carolina. His pizza company’s Instagram account has 3.5 million followers, while more than 516,000 people follow him on Facebook.

In his 2010 interview with PMQ, Akdeniz made it clear that he was in the pizza business to stay. “I don’t know how I am going to do it,” he said, “but I will be making pizza my whole life.”