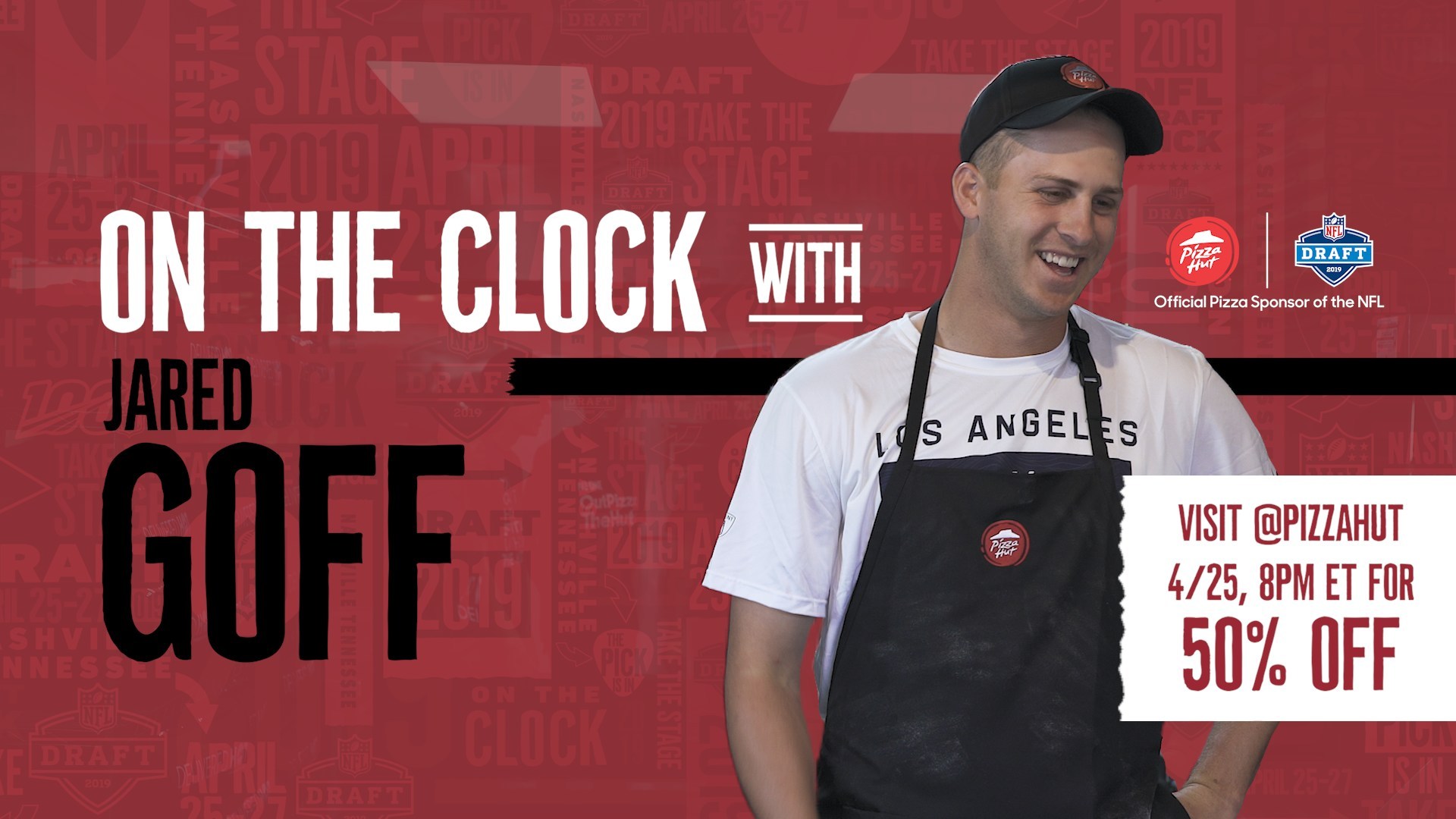 As it enters its second year as the Official Pizza Sponsor of the NFL, Pizza Hut is celebrating the fans who made year one a success by putting them on the clock to redeem an exclusive offer during the 2019 NFL Draft ceremony. During the first pick of this year's NFL Draft, Pizza Hut and 2016 first overall Draft pick, Jared Goff, will unveil a code for fans to redeem 50% off all menu-priced pizzas and enter for a chance to win a VIP trip to a 2019-2020 NFL regular season game of their choice.

"With year one of the sponsorship under our belt, it's a surreal feeling to return to where it all began: the NFL Draft," said Marianne Radley, chief brand officer, Pizza Hut. "Football fans have been our focal point since becoming the Official Pizza Sponsor of the NFL, and to say 'thank you,' we teamed up with our player partner Jared Goff to offer fans a deal fit for the first round."

Beginning this Thursday at 7 pm CST during the first overall pick of the NFL Draft, fans are encouraged to visit Pizza Hut on Twitter, Instagram or Facebook, to receive a limited-time code for 50% off all menu-priced pizzas to use online throughout the 2019 NFL Draft ceremony. All fans who use the code throughout the weekend will also be entered for a chance to win a VIP trip to see their favorite NFL team play during the regular season.

In addition to putting fans on the clock, Pizza Hut will recognize the 78th overall pick of the NFL Draft – or "Pi Pick," the 14th pick in the third round (3.14) – for the second year in a row, awarding the lucky pick with free pizza for a year to get him through his rookie NFL season.

For fans traveling to Nashville for the 2019 NFL Draft, Pizza Hut will be rolling out Nashville-inspired, pizza-fueled experiences to keep the celebration going all week long. Back by popular demand from the Pizza Hut Super Bowl LIII experience, fans will be able to dance alongside Pizza Hut player partner JuJu Smith-Schuster via an augmented reality experience at NFL Draft Experience. And for those who dance up an appetite, Pizza Hut pizza will, of course, be up for grabs!

Pizza Hut signed a multi-year agreement with the NFL in 2018, allowing the brand a vast array of exclusive marketing rights, benefits and designations. In its first year as the Official Pizza Sponsor of the NFL, Pizza Hut set out to bring the in-stadium experience to football fans' living rooms through Game Plan – a digital platform allowing fans to sign up for exclusive game day deals and kickoff reminders – and secured partnership deals with some of the most loved teams and players in the league.