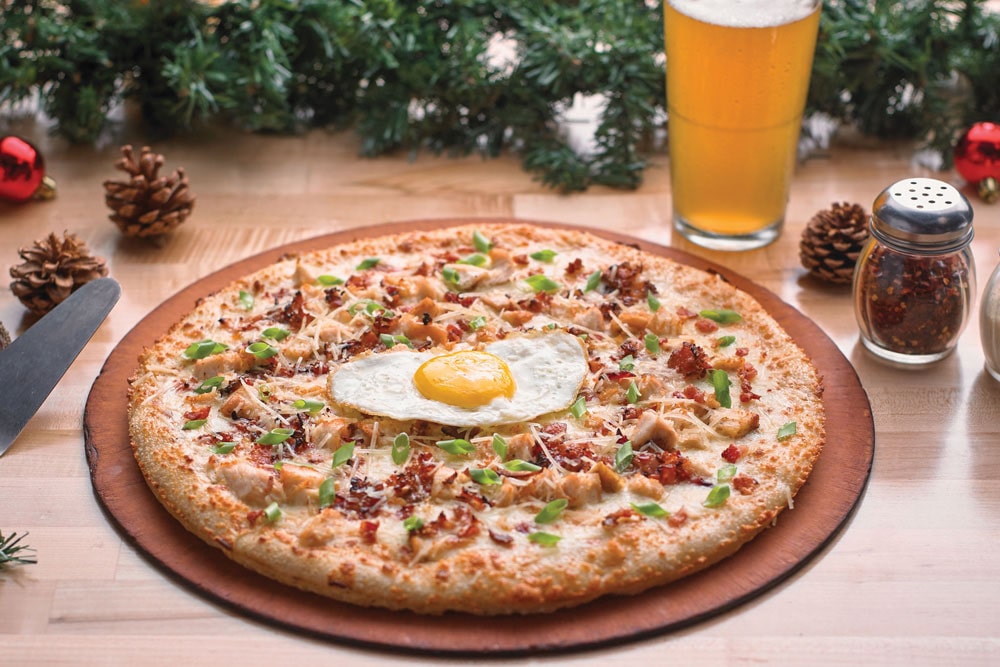 Chicken might not be as sexy as prosciutto or cup-and-char pepperoni, but the humble meat outranks them both in consumer popularity. According to research presented at the National Chicken Council’s Marketing Summit in July 2019, many consumers prefer chicken over other proteins because of its versatility, value for price, taste and convenience, among other factors. Just last year, more than 9 billion chickens were raised in the United States alone, resulting in 42.1 billion pounds of chicken products marketed on a ready-to-cook basis. A report by the U.S. Department of Agriculture (USDA) estimated that consumers ate a record-breaking 93 pounds of chicken per person in 2018.

And there’s another compelling reason to feature this wonder bird more prominently on your pizzeria’s menu. The International Poultry Council predicted last April that the total worldwide production of pork would decline by at least 14% in 2019 due to African swine fever taking its toll on pig herds in 15 countries and three continents. This could leave a huge gap, increasing the demand for chicken and making it the most popular protein in the coming year. In fact, the USDA predicts that per-capita consumption of chicken in the United States will rise to 95.8 pounds in 2020.

Finally, to hammer this point home: Research firm Technomic’s 2018 College and University Consumer Trend Report found that 46% of Generation Z (any person born after 1997) prefers chicken for dinner over other proteins. It also found that 23% of these “Zoomers” like to build a meal out of appetizers, like chicken nuggets or wings.

“Chicken is an approachable protein,” says Nimesh Patel, culinary director for the Dallas-based Boston’s Pizza Restaurant & Sports Bar chain. “We’re definitely seeing more interest in it as a topping, as it’s perceived to be healthier and lighter than some of its more indulgent or greasy counterparts. It’s like pineapple on pizza, though—people love it or hate it!”

Keep Your Eyes On the Thighs

Chicken nuggets and wings are pure, finger-licking goodness for pizza fans accustomed to eating with their hands. “You can turn any appetizer or entrée into pizza—all you have to do is deconstruct it, play around, and put it on a pie,” says Brandon Davis, owner of Novella’s Pizza in New Hudson, Michigan.

Davis’ personal favorite is roasted chicken thigh as a pizza topping. “We roast the thigh, cool it and shred it,” Davis says. “Everybody thinks they want chicken breast on their pizza, or anything else, but we all really want the chicken thigh—better flavor, juicy, white in color, but still delicious.”

Patel, meanwhile, prefers diced, boneless white meat—always precooked. “When looking for texture, bite and adaptability, the chicken breast is king,” he says. “Diced chicken-breast chunks will provide uniformity that will hold up against that 500-plus-degree oven. Creamy and savory sauces tend to pair well with chicken, which is why our Chicken Carbonara Pizza is so delicious—think white cream sauce and Fontina, or basil pesto and feta cheese. Another great sauce to use is barbecue sauce, due to its versatility. Barbecue sauce can be paired with either mozzarella or cheddar cheeses, which results in a creamy yet smoky flavor.”

Andrew Datre, owner of Lupo Pizzeria in Fair Haven, New Jersey, agrees that quality meat is key. “Small- to medium-size birds are the best-tasting ones,” he says. “And always use a fresh product, never frozen.” He takes pride in his popular chicken-topped pies, the Buffalo Chicken Pizza and the Chicken Vodka Pizza. For both, he sautées fried or grilled chicken chunks in housemade Buffalo or vodka sauce, then scoops the meat straight from the pan onto the pizza. He covers the pie with mozzarella and drizzles on more sauce before baking it in the oven.

But Datre’s Chicken Vodka Wrap has become even more popular than its pizza counterpart, he says. “We have been making this wrap for 20 years, and I’d like to take credit for inventing it,” he says. “This has been a staple menu item in Gianni’s [a five-store New Jersey chain owned by Datre’s family] and, funnily enough, it came to be by talking with a customer. It starts with a fried chicken cutlet sautéed with vodka sauce and mozzarella, rolled up in a wrap to enjoy.”

Datre, who’s keeping quiet about the details of his vodka sauce, says talking with customers can help with brainstorming chicken dishes. “I feel that listening to them is very important, because what they want is what will sell,” he says. “I do tend to look on social media and read publications as well. Also, I turn to my staff, especially Ian Rivera, who spends a lot of time in the market looking at products to see what sells best.” 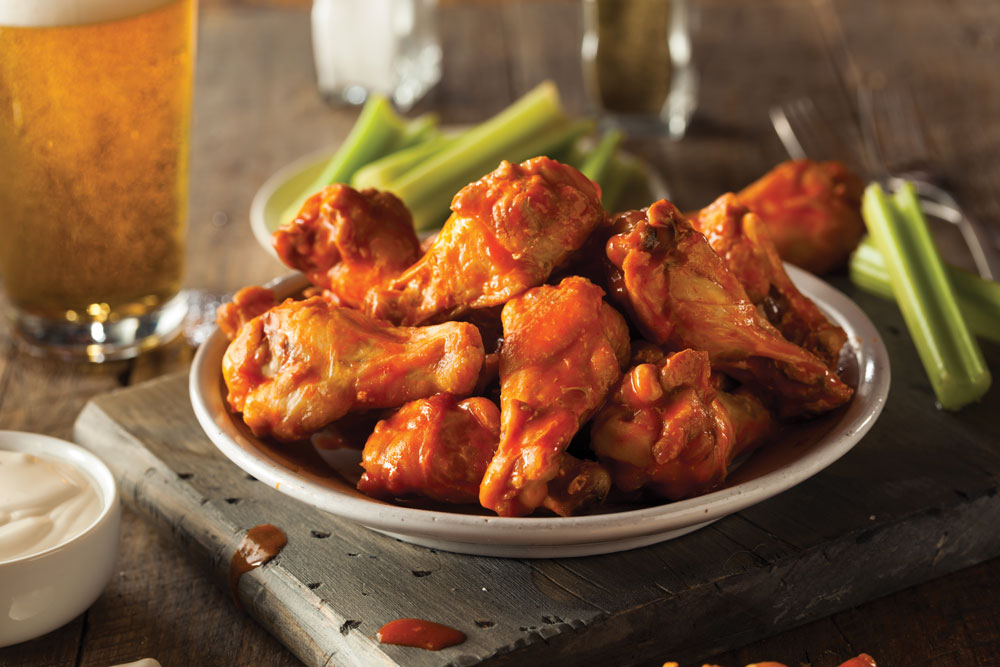 What’s the secret to making great chicken wings? At the Dallas-based Boston’s Pizza Restaurant & Sports Bar, it starts with good, clean chicken meat. “We source a premium antibiotic-free and natural chicken wing,” says culinary director Nimesh Patel. “And let’s be honest: Size does matter. We source only wings that meet our size requirements. Wings shouldn’t be as big as a chicken leg, but they must have a healthy meat-to-bone ratio.”

Seasoning is important, too. “A good chicken wing should be able to stand on its own, with no sauce,” Patel adds. “But if you’re like me, bring on the flavor! With 13 wing sauces and dry rubs, from dry rub ranch to Korean BBQ to Nashville Hot, we have a flavor for everyone without overcomplicating it.”

From fried Boneless Buffalo Bites to wings and several signature pizzas, chicken is all over the menu at Karvelas Pizza Company, with locations in Hogansville and LaGrange, Georgia. Owner Joey Karvelas says he uses fresh chicken tenders exclusively. “I’ve seen an increased demand for chicken on pizza,” he says. “However, our chicken bites are growing out of control. I added these to my menu as a test run five years ago, and now they’re almost as popular as the pizza. We Southerners love our fried chicken. I think everyone else is catching on, and chicken is viewed as a healthier option. That’s why it’s gaining more popularity.”

The trick with chicken, Karvelas notes, is to “season it well, as it can be a very flavorless topping,” and to place the meat on the pizza before adding cheese to avoid drying out the chicken. “This adds a layer of moisture to protect your juicy chicken,” he says.

Karvelas also vouches for creating housemade sauces that can double as pizza sauces or dipping sauces for chicken. His bestsellers include Joey’s Tennessee Whiskey, which is made with Jack Daniels; Copperhead Road, featuring sweet, tangy Buffalo sauce; and the extra-spicy Hotlanta, a garlicky Buffalo sauce that he also features on a pizza.

“I will say I’ve always had a special bond with the Flying Buffalo Pie on my menu,” Karvelas adds. “I first ate this combination at Dazzo’s Pizzeria in Knoxville, Tennessee, over a decade ago. It was so delicious and unique that I created my own version of it. The base is my housemade blue cheese dip, topped with our fried chicken bites tossed in a buttery, garlicky Buffalo sauce, whole-milk mozzarella, and finished with Parmigiana and a swirl of more Buffalo sauce. It’s definitely something you will crave after you try it.”

Even as restaurant diners clamor for more vegetarian and vegan dishes, it’s safe to say that chicken—perceived as a healthier meat—won’t be flying the coop anytime soon. From wings and nuggets to wraps and chicken Parmigiana, it’s easy to find both classic and innovative applications for this versatile barnyard bird.