Follow these expert tips to heat up your beer sales in cold-weather months! - PMQ Pizza Magazine 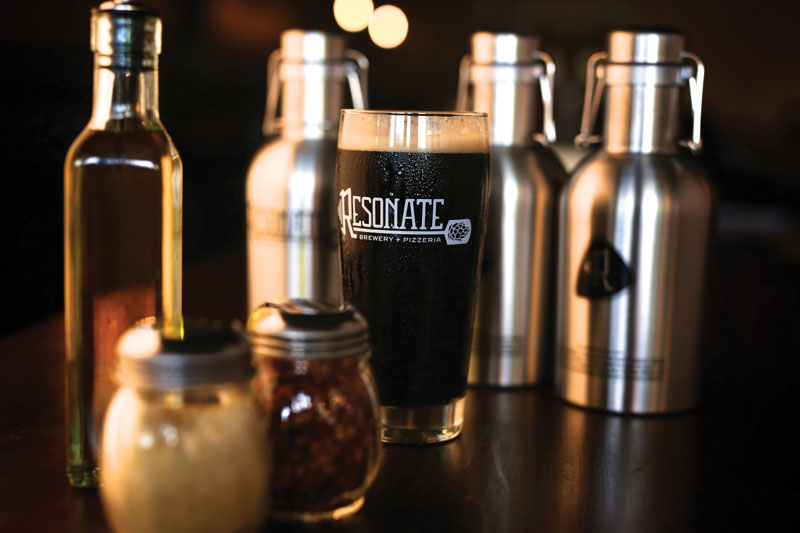 Think of them as liquid comfort food: Winter beers, with their “meatier” flavor profiles, warm the bones while standing up to the richer fare that customers crave in the colder months. And though the sweltering days of summer have come and gone, your customers still seek seasonal brews to ignite their pizza loving palates.

“Winter beer styles typically create a sense of warmth, with substantial body and mouthfeel—something a bit bigger, with more depth,” explains Mike Ritzer, founder and head brewer at Resonate Brewery + Pizzeria in Bellevue, Washington. “A great winter beer is one that has more body, some malt sweetness and usually a spicy note that reminds you of the season, regardless of color—and these types also pair well with the richer foods we tend to enjoy at this time.”

“Marketing has become more sleight of hand. We’re constantly trying to find new content providers for our social media and people to co-market with, and local breweries are ideal for that.”
—Kurtis Schart, Fireside Pies

Keeping Your Cool Beer style dictates the appropriate serving temperature, says Mike Ritzer, founder and head brewer at Resonate Brewery + Pizzeria in Bellevue, Washington. “Bigger, maltier styles typically display their character best as they get above the 50°F range, but an IIPA is going to shine closer to 45°F, while a porter will lie in between.” Adam Schulte, sales manager at Artisanal Imports in Chicago, recommends serving just out of the fridge, with a five-minute “warming period.” Try winter ales at 45° to 50°F, with lagers served slightly cooler (between 40° and 45°F); as the beers warm, they become more flavorful and complex.

Though customers love variety year-round, winter has always been associated with darker beers. Neil Sharp, general manager of Innis & Gunn, based in Edinburgh, Scotland, points to history and tradition: Brewing was historically a fall and winter activity, when new barley was harvested and farm workers had less field work to do. “Cold weather made it possible to store beers for longer, especially high-alcohol beers, like stouts,” Sharp says. “The advent of refrigeration enabled brewers to offer lagers in the warm months and throughout the year, but seasonal tastes persisted.” Hence, he adds, winter beers boast a full, maltier mouthfeel and are often called winter warmers—stouts, porters and barrel- aged beers designed for drinking by the fireplace.

Luckily, there’s no shortage of winter-friendly beers on tap. Ritzer shares some of his favorites:

Go dark—Try a spin on a dark beer with a toasted coconut porter. This robust porter (with roasted, chocolate and caramel notes) receives a boost from Madagascar vanilla beans, cacao nibs and freshly toasted coconut. Customers love the rich flavor and will appreciate the notes that remind them of summer—the best of both worlds.

’Tis the season for saisons—Saisons are now wildly popular in fall and winter. This farmhouse style was originally created to be refreshing, with low alcohol content, helping sustain farm workers during summer months. But saison now includes many sub-styles, all very dry but some with deceptively higher alcohol content, plus an appropriate spicy character and complex flavor profile.

For further inspiration, look locally. Dallas-based Fireside Pies offers four rotating drafts at each of its four locations, with at least two seasonal (and often local) selections on tap at all times. “Texas beers have done very well for us, such as Shiner Holiday Cheer,” says Kurtis Schart, director of operations. “People anticipate it and are immediately excited when they see it in the restaurant. We also like Rahr & Sons Winter Warmer, from Fort Worth, and Saint Arnold’s Christmas Ale, from Houston.”

Adam Schulte, sales manager at Artisanal Imports in Chicago, likes to mine beer’s centuries-old roots. Stronger, full-bodied Belgian beers and Trappist ales (with 8% and higher alcohol by volume) provide some warmth in chilly weather, he notes, and they’re consumed more slowly, perfect for winter drinking. Try Pauwel Kwak, La Trappe Quadrupel and St. Feuillien Brune, for example. For lighter options, he suggests, look to German lagers with clean taste but full, malty flavors; schwarzbier, bockbier, doppelbock and märzen are drinkable but loaded with taste. “Rich and savory flavors of baked bread, roasted coffee, chocolate, dark fruits and many more can all be found in beer,” Schulte says. “It may remind the drinker of the smells of home and comfort, which we all seek in the middle of a cold winter.”

Winter beers easily play off the flavors of existing menu items. As a general rule, they stand up to bold, spicy notes or the rich desserts customers crave around the holidays. “Beer and pizza are based on similar ingredients (yeast, water and flour/grain), so they make for great pairing opportunities, but I focus on strength and harmony,” Ritzer says. “When pairing winter beers with food, try to match the richness and flavor of the beer.”

Sharp notes that dark beers like porters and stouts go well with intense flavors, such as roasted or smoked food and barbecued meats. “Stronger beers, like imperial stouts, can easily overpower many main dishes, but they go down well with chocolate and sweet desserts,” he says. Ultimately, Sharp believes, pizzerias should treat the beer list like the wine list, offering a choice of styles and flavors, while waitstaff should be educated on what beers and dishes pair well.

“Stronger beers, like imperial stouts, can easily overpower many main dishes, but they go down well with chocolate and sweet desserts.”
—Neil Sharp, Innis & Gunn

Schulte agrees that spicy meats like sausage and pepperoni can be balanced by rich, robust ales and lagers, while a pizza with red sauce and hearty cheeses may call for a darker, drier beer, such as a Trappist or abbey ale, or a dark lager. Lighter pizzas with chicken, less cheese or white sauces may require something less intense, such as a Belgian tripel. “Or take it up a notch by pairing a bold supreme pizza with a sharp Belgian sour ale,” Schulte suggests. “It will slice right through the heaviness.” Ritzer adds that an IIPA pairs with meat-heavy pizzas (think sausage, pepperoni and salami); its body and flavor complements the pizza and cleanses the palate with a dry, clean finish.

Porters or stouts provide greater pairing options, so you’ll want to play off their sweeter notes or roasted flavors. “These can pair great with a barbecue chicken or even a bacon-and-clam pie,” Ritzer says. “Baltic porter, a sub-style, offers even more complexity, with notes of molasses and toffee, plus a higher ABV. These may overwhelm many main dishes but are a great choice for pairing with rich desserts.”

Meanwhile, at Fireside, housemade sausages with robust and spicy flavors pair well with winter beers, but a local toffee porter is the star of the show for one popular dessert, an “adult float”: scoops of local vanilla bean ice cream doused in the beer. “The toffee porter has
coffee notes for an after-dinner drink flavor, while the ice cream adds creamy texture,” Schart explains. “It’s fun and really easy to execute in those busy weeks around the holidays—little labor and no extra space needed during high-volume times.”

Once you’ve poured and paired, market your winter beer selection! Schulte recommends engaging customers by pairing a weekly pizza with a specific beer. Educate your customers about why the pairing works, but let them explore their own palates. You can also host a contest in which the winning customer gets to choose his favorite beer from your menu and suggest a pizza of his own creation, then feature that pizza-and-beer pairing for a limited time.

In-house, Fireside highlights seasonal selections on handwritten chalkboards and pairs up with local breweries for pint nights, letting attendees keep the glassware. Beer dinners pair four-course meals with brews, encouraging interaction among fans while giving extra exposure to both brewery and pizzeria. Around the holidays, when customers are apt to give back, these events may also benefit charities.

“Marketing has become more sleight of hand,” Schart says. “We’re constantly trying to find new content providers for our social media and people to co-market with us, and local breweries are ideal for that.”

And one final suggestion from Ritzer: Stay ahead of the curve. Winter beers start coming out in August (some even earlier), and by early January, many beer lovers are already looking toward spring. Plan in advance for your latest seasonal selections!