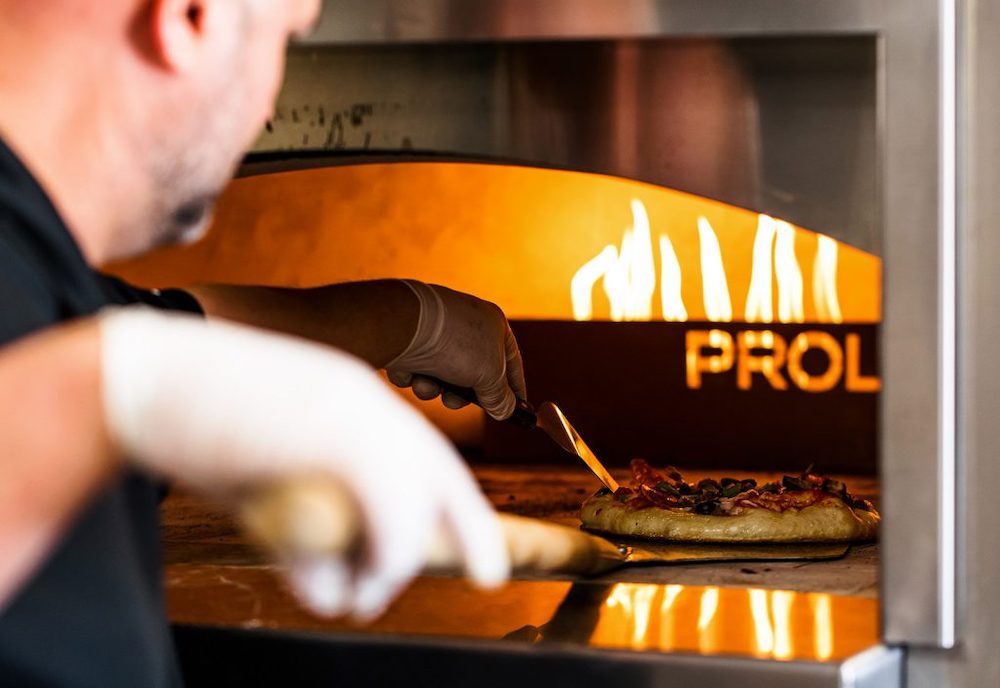 Related: How to add drive-thru service for your pizza restaurant

Anthony E. Zuiker was the brains behind “CSI,” which ran on CBS for 15 years and spawned a spinoff, “CSI: Las Vegas.” Now he has partnered with Scott Godino Jr., owner of the Born and Raised (B.A.R.) restaurant concept in Las Vegas, to launch the one-of-a-kind entertainment/drive-thru pizza concept.

Fly Pie, which opened on June 26, promises family-friendly fun from “takeoff” (ordering) to “landing” (receiving the order). As customers drive through the pick-up tunnel—which resembles an airport hangar—they’re greeted with an immersive entertainment experience featuring ultra-high-resolution projectors showing animated shorts about Fly Pie characters like Lil Churro Tot, Mr. Heat and Chomp, all created by Zuiker. Meanwhile, appealing scents, such as pizza, cinnamon, bacon and deep-fried Oreo cookies, waft through the air to tantalize the taste buds and whet the appetite.

“Fly Pie is about heart, smiles and great pizza on the fly,” Zuiker said. “Our goal is to be the best part of a family’s day. One trip down our runway, and we believe you’ll fly with us in every way imaginable.”

As part of an employee empowerment program, Fly Pie staffers, called “flight personnel,” choose and wear patches that denote their interests, expertise and personality. “They’re representative of who they are,” Zuiker told the Las Vegas Review-Journal. “When I saw that girl holding an LGBTQ patch with tears in her eyes and another one holding a Black Lives Matter patch … it’s about empowerment of young people, to give them a safe haven. ‘This is who I am, and I’m accepted here.’ That’s who we are.”

To get the community involved in Fly Pie, local graffiti artists are invited to paint new works on an original art wall every three months. The restaurant also features a TikTok Wall and a Character Wall, where customers can take selfies with the Fly Pie characters.

Godino said Fly Pie is “a community-first organization that values the responsibility of serving our members. This team and the concept we’ve come up with has the opportunity to revolutionize the quick-service industry by marrying exceptional food with an entertainment experience like no other.”

In a March 2021 story on Eater.com, Zuiker said he ate at B.A.R. several times while visiting his ailing mother in Las Vegas and eventually reached out to Godino with his idea for Fly Pie. As it turned out, Godino had a similar concept in mind. “And at that moment, serendipitously, we realized that that was our destiny,” Zuiker told Eater.com. “We put the peanut butter of his restaurant acumen with my global storytelling chocolate and smushed it together to make Fly Pie.”