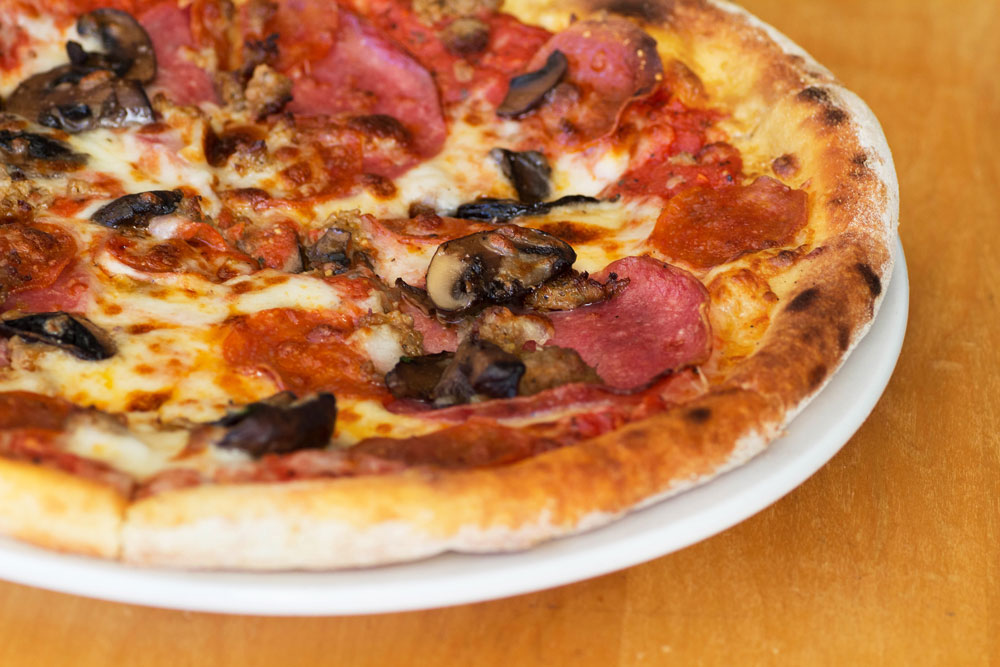 Tasty finishing oils (also called anointing oils or condiment oils) work perfectly in a pizzeria because they can be used in so many ways, across the menu—think dipping oils, salad dressings, or drizzles atop your signature pies or side items. The possibilities are endless: High-quality extra-virgin olive oil (EVOO), truffle oil, pistachio oil, almond oil, sesame oil, or infused or flavored oils (think lemon, porcini, chili or herb) add depth of flavor while boosting value perception. And, although they cost more than more utilitarian oil types, they can make your menu items pop.

Cooking oils and finishing oils serve different purposes, according to David Mitroff, a restaurant consultant and founder of Piedmont Avenue Consulting in Oakland, California. “Cooking oils can withstand high temperature that makes frying and high-heat cooking possible, while oils with a lower smoke point will break down to glycerol and free fatty acids and start to produce toxic fumes and harmful free radicals,” he explains. “On the other hand, finishing oils create a more diverse taste for your dish and do not require heating. Some popular uses of finishing oil include creating customized sauces, glazing breads and adding eye appeal with plate decorations.”

At Rally Pizza in Vancouver, Washington, owner and chef Alan Maniscalco mostly uses two varieties of oil, EVOO and canola, but has incorporated other specialty oils in smaller quantities. “When deciding which oil to use, flavor is key,” Maniscalco says. “Canola or another neutral-flavor oil, like grapeseed oil, works best when you want to taste the ingredient it’s being paired with. Canola is also useful when you’re cooking at a high heat, because it has a high smoke point, while EVOO is useful as a finishing oil when you want to taste the oil itself. It’s also great for cooking, but at lower temperatures, because it has a low smoke point and burns more easily, which results in a bitter flavor.”

Pizzerias can also use finishing oils to set themselves apart from competitors and elevate their menus—and their profits. “The types of oils present in menu items indicate how upscale and serious the restaurant is,” Mitroff notes. “Most pizza chains are not going to go the extra mile to drizzle their pizzas with expensive EVOO, but an upscale or artisan pizzeria will.”

“[Our canola oil-based salsa verde] is similar to pesto, minus the nuts and cheese. It’s amazingly bright and herbaceous, and we use it as a base for many applications, like mixing it with EVOO until it has a spoonable consistency to finish our Tocca di Verde right after it comes out of the oven.”
—Alan Maniscalco, Rally Pizza

Weed Eaters As more states vote to legalize marijuana, the munchie-inducing plant has, ironically, made its way into everything edible—including, yes, a finishing oil. Pot d’Huile is a cannabis-infused olive oil made with California-grown Gorilla Cookies cannabis and EVOO from a small family farm in Northern California. And it’s already being endorsed by multiple chefs in the state’s Bay Area. “The sticky-sweet gummies and baked goods of the past are making way for treats like homemade garlic croutons and fresh salad dressings, all infused with cannabis via Pot d’Huile,” says Carolyn Insley, account manager at RRPR Creative in San Francisco. “The oil, while great for cooking at low temperatures, also makes a fantastic finishing oil for anything from ice cream to potatoes to pizza.”

Head chef and owner Wes Rowe from San Francisco’s Wes Burger ‘N’ More is using Pot d’Huile on tater tots after hours; it isn’t quite legal for restaurants to serve items with Pot d’Huile during regular service, so the oil is also gaining popularity in pop-up suppers. But it’s available only for residents of California who have a valid California recommendation. But if pro-pot regulations continue to gain ground, the future of finishing oils might look downright trippy.

Of course, olive oil is a standby at many pizzerias, but a high-quality variety can impart impeccable flavor to a variety of dishes. “You can’t go wrong with cold-pressed EVOO,” Mitroff says. “You can brush your crust with EVOO before baking and again before serving, to allow your dough to retain flavor during oven time. In general, finishing oils are best used as a light drizzle, adding moisture to drier pizza toppings, or as a dipping option for grill-style or whole-wheat pizza crusts that might be tougher in texture.”

Alfie Szeprethy, corporate chef for La Jolla, California-based Sammy’s Woodfired Pizza & Grill, with 18 locations in California and Nevada, uses EVOO as a finishing oil for his pizza crust. “It has a low smoke point and imparts a lot of flavor,” he says. “We also use the oil, along with a Za’atar spice mix, on our hummus, baba ganoush and lebni to accent the flavors and textures of the dips.”

Rally Pizza uses EVOO to create a go-to blend that Maniscalco calls “flavor sauce.” He makes the mixture by slowly cooking minced garlic in the oil at a low temperature until the garlic is soft; then he adds crushed fennel seed and chile flakes. “We use this sauce as a pizza topping,” he says. “Our Little Gina is simply tomato sauce, hand-pulled mozzarella and flavor sauce. The sauce tops our Tocca di Verde (‘touch of green’), with house-made ricotta, hand-pulled mozzarella, Parmigiano-Reggiano and salsa verde, and we also mix flavor sauce into our pizza sauce for a spicy dipping sauce to accompany arancini.” Alternatively, Maniscalco drizzles a clean, buttery EVOO over roasted vegetables and fresh mozzarella.

“The types of oils present in menu items indicate how upscale and serious the restaurant is. Most pizza chains are not going to go the extra mile to drizzle their pizzas with expensive EVOO, but an upscale or artisan pizzeria will.”
—David Mitroff, Piedmont Avenue Consulting

Meanwhile, humble canola oil is a key ingredient in Rally Pizza’s salsa verde, or green sauce. Canola’s neutral flavor offers a perfect base for the sauce, which blends basil, parsley, cilantro, green onion, serrano chile and lime juice; Maniscalco says it’s “similar to pesto, minus the nuts and cheese. It’s amazingly bright and herbaceous, and we use it as a base for many applications, like mixing it with EVOO until it has a spoonable consistency to finish our Tocca di Verde right after it comes out of the oven.”

And there are other applications: Maniscalco uses the salsa verde to finish a creamy polenta gratin made with ricotta, mozzarella and a spicy tomato sauce. He mixes the sauce with a flavored oil made by slowly cooking turmeric powder and fenugreek seed in canola oil, which is strained, then cooled. “The resulting oil has a beautiful golden color,” he explains. “The mixture of green sauce and flavored oil separates into a beautiful gold and green mosaic over the bubbling gratin, which we finish with Parmigiano-Reggiano.”

Another World of Tastes

Indeed, flavored oils conjure up another world of tastes. “One of our most popular pizzas is the Brie & Truffle Oil, thanks to the flavor from the infused oil, which is drizzled over the top after coming out of the wood-fired oven,” Szeprethy says. “Another option would be to use a chili oil brushed on the pizza crust to add some heat.” Truffle oil, of course, has also graced many menus of late, thanks to truffle fries popping up in restaurants coast to coast; a drizzle on potatoes combined with a sprinkling of Parmesan easily transforms humble spuds into gourmet superstars. 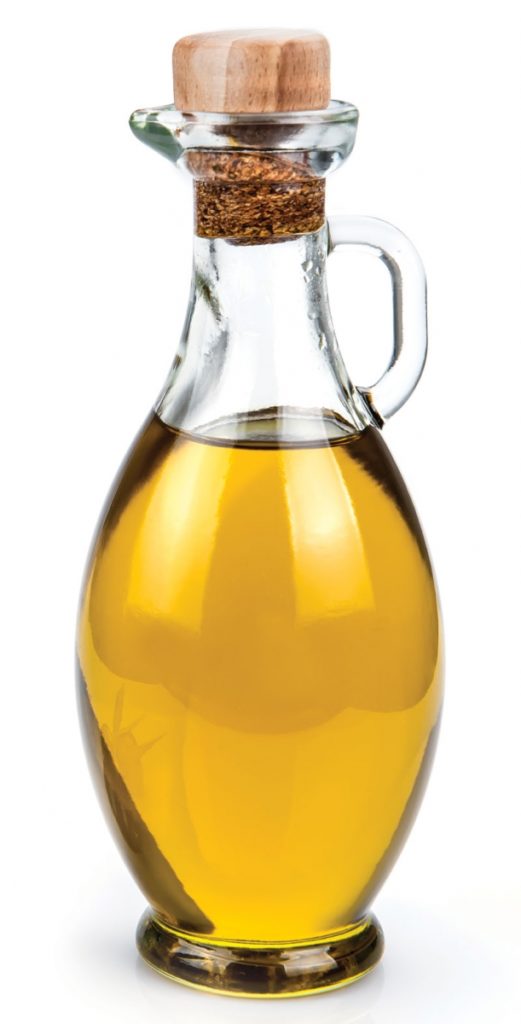 Additional specialty oils have cropped up in recent years, while others have cemented their roles in various cuisines. For example, toasted sesame oil is an Asian mainstay, ideal for drizzling on Far East-inspired dishes. “The aroma of toasted sesame oil is distinct, yet not overwhelming, and it can be a great finishing addition to soups, noodles and sautéed dishes. It works well with the flavors of garlic or ginger,” Mitroff says. “Pistachio oil makes a great vinaigrette for light salads or steamed vegetables—and, because of its intense taste, it best pairs with simple flavors, like balsamic vinegar or a drizzle of honey.”

Maniscalco blends sesame oil with mirin, soy sauce and gochujang (Korean hot chile paste) to dress a spicy kimchi and radish sprout salad that accompanies Rally Pizza’s Pork and Duck, a thick slice of porchetta topped with a fried duck egg. The tangy, spicy salad helps cut through the richness of the pork and duck yolk, he says. “We also use other specialty oils, like avocado oil drizzled over a salad of oranges, fennel and radicchio, and coconut oil, in which we cook spices such as cumin, coriander and mustard seed until they pop and crackle,” Maniscalco says. “This oil is great spooned over roasted vegetables like cauliflower, carrots and potatoes.”

As demonstrated by adventurous chefs around the country, finishing oils can prove extremely versatile. Chances are, many items on your menu can be jazzed up with a simple drizzle. With so many varieties and price points to choose from, the hardest part will likely be narrowing down what works best for your operation. Take a look at your menu and ask yourself: Is it time for an oil change?