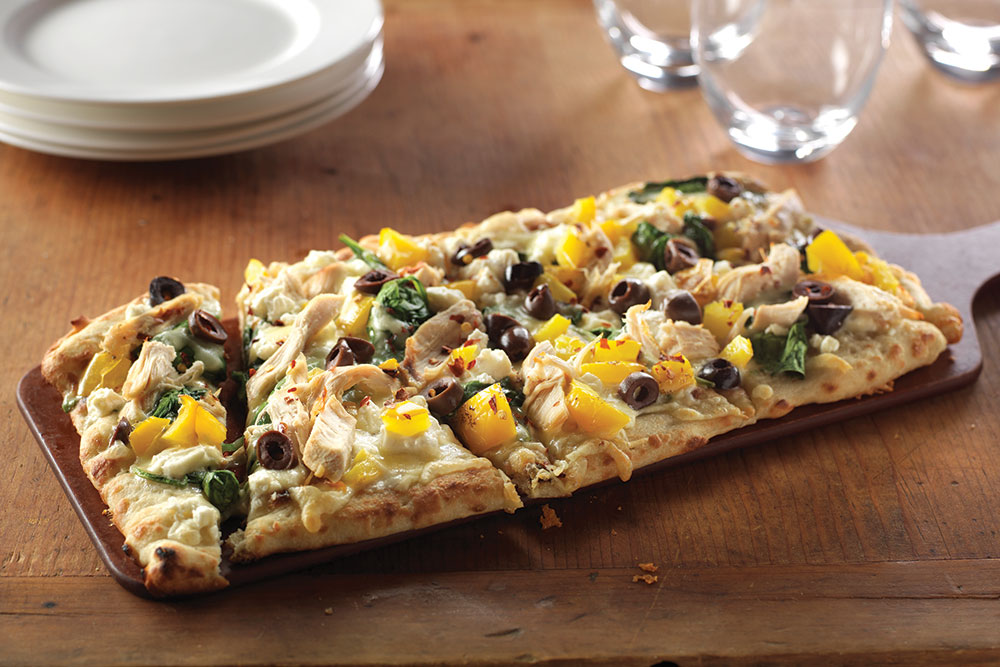 There’s no denying it: Flatbreads have arrived. Of course, historians will say they’ve always been around, with ancient recipes circulating for thousands of years—naan and roti in India, lavash and pita in the Middle East, injera in Ethiopia. But their popularity soars today, with mega-chains from Taco Bell and Subway to Pizza Hut (pizzahut.com) and Chili’s offering their own takes on the phenomenon.

Pizzeria operators are already in a great position to offer flatbreads, which fulfill so many modern customer requirements: an artisan flair, a healthier perception and a customizable format. Using the same dough you make every day, you can appeal to a wider range of consumers without adding anything in terms of inventory. We’d say the possibilities are flat-out endless.

George Schenk, founder/owner of American Flatbread Company (americanflatbread.com), was a modern-day pioneer in the category, developing his operation in 1985 and growing to four current locations in Vermont and New York. “Flatbreads were originally developed as a solution to the problem of cooking grains and making their nutrition more available and more flavorful,” Schenk says. “Many cultures have mixed flour with a fluid—water, milk, broth or even diluted seawater—then kneaded and rolled the dough and put it on a griddle to cook. Flatbreads are a union between nutrition and the joys of the palate.”

Flatbreads are also helping to grow the pizzeria business specifically. According to GuestMetrics, based in Leesburg, Virginia, recent strong sales performances of pizza in table-service restaurants was driven largely by expanded flatbread offerings. “Pizza sales were up 8.2% in 2012 and picked up further steam during the first quarter of 2013, growing 8.8%, resulting in pizza gaining about 20 basis points of share in the overall food category in table-service restaurants,” says GuestMetrics CEO Bill Pecoriello.

GuestMetrics looked across more than 400 different types of pizzas sold and saw that flatbread pizza’s share of the overall pizza category grew from about 8% in 2011 to 14% in 2012, and for the first quarter of 2013 increased to around 17%, according to Peter Reidhead, vice president of strategy and insights at GuestMetrics. “To put the importance of this in perspective, while non-flatbread pizzas were 83% of total pizza sales in 2013’s first quarter, about 60% of the incremental growth for pizza was due to strength in flatbread pizzas,” Reidhead says.

Why are flatbreads heating up so quickly? Hallow believes versatility is one key factor. “Flatbreads can be served like pizzas, topped with a variety of ingredients, then baked; as sandwiches, folded and filled with ingredients; and even as salad bases,” she explains. “Consumers also tend to perceive flatbreads as healthier and of higher quality than pizzas. Operators commonly market flatbreads with terms like ‘artisan’ and ‘rustic’ and top them with upscale ingredients that you may not see often on pizzas, such as shrimp, prosciutto, and gourmet cheeses like Brie and Gouda.”

Schenk agrees that the word “flatbread” conjures images of an artisan touch. “The word has been used because of its poetry and to differentiate it from pizza, which in some cases is associated with mediocrity,” he notes. “A flatbread connotes something done with more thought and care. But another reason for flatbread’s success is simple: It’s an effective platform on which to feed—relatively inexpensive and infinitely flexible for meat-eaters, vegetarians, vegans and those with a gluten-free diet.”

“Most great pizzerias make a wonderful pie, but introducing a flatbread can increase the reasons a customer will want to order from that pizzeria. It doesn't take away from pizza sales; it provides additional items to be sold.”
—Cherise Kramer, Ultra-Thin Crusts

To offer flatbreads, start at the base—the flatbread itself—and then dream up the myriad ways in which to top it, stuff it or serve it. Schenk admits that flatbreads are highly influenced by pizza, since the latter is just a variant of the former. But for his own operation, he wanted to reach back in time, basing his recipes not in how much money he could make but in how well the flatbreads could be made—and he advises other operators to do the same. “Many master bread bakers still believe the best tastes are developed in earthen ovens, built with stone and clay and heated with fire,” notes Schenk. Of course, flatbreads can be cooked any way pizzas can—on a grill, over a wood or coal fire, or even on a simple deck or conveyor oven.

Regardless of your cooking method, think about how you’ll differentiate your flatbreads. Compared to pizza, they tend to be thinner (meaning less carbs for health-conscious customers), and flatbreads often boast high-quality, cleaner ingredients to offset the common perception that pizza is unhealthy. And don’t be afraid to tweak as you go: Schenk started his business by focusing on more eclectic and artisanal recipes, but when he saw how many kids were coming in, he added traditional pizza-type options. “We provide the whole range, from simple sauce-and-cheese to nitrite-free pepperoni,” he says. “But we make our own sausage, sauce and dough in-house, and we maintain a natural, organic, local sensibility about our ingredients.”

But flatbreads needn’t be limited to pizza-like versions topped with a smattering of ingredients. With 10 locations in Louisiana and Texas, Reginelli’s Pizzeria (reginellis.com) uses flatbreads as bases for salads, such as the Ancona Caesar (with marinated chicken), the all-veggie Salad Number Three, and the ham-and-turkey-enhanced Deli Salad.

Meanwhile, Michael’s Pizzeria (michaelspizzeria.com), with three locations in Southern California, uses flatbreads to make puccias, sandwich-like creations that are similar to Italian piadinas. Crafted with a different flour than regular pizzas (0 flour instead of 00, for less gluten and elasticity), the dough is flattened, grilled and baked in an 800° oven for a crispy finish. “For lunchtime in our downtown Long Beach location, our puccias are the most popular item,” says Massimo Aronne, general manager of the Michael’s Restaurant Group.

The pizzeria’s most popular combinations include confit artichoke, pesto and housemade mozzarella, as well as roasted and spiced pork belly with arugula, shaved Parmesan and garlic aioli. “We’re always inspired by the seasons—we work with what’s available and offer a rotating vegetable-based puccia,” Aronne says. “In each variation, we try to offer spicy or peppery ingredients, acidity—like the lemon juice in our garlic aioli—and fat, so there’s a balance of flavors and textures.”

Adding a balsamic glaze, a housemade sauce or fresh greens just before serving your flatbread enhances the hand-crafted impact and adds visual and textural depth to your product while setting you apart from competitors.

Once your flatbreads are on the menu, don’t forget to spread the word. When the Chili’s chain was promoting its new flatbreads, it offered giveaways for patrons who submitted e-mail addresses, dining preferences and other data—a great way to generate interest and capture customer info. Michael’s sent out e-blasts about its lunch menu, engaged in local advertising for its puccias, and trained staff to understand them and share that information with guests. And the flatbread sandwiches are still part of an ongoing lunch deal—a puccia with a choice of side salad (including seasonal options) for $10.

Schenk, in earlier years, attended local festivals to offer education and encourage trial of his creations; now they have a life of their own. But his menu still offers detailed descriptions of ingredients (and, in some cases, where they come from), which reinforces the artisanal angle. “Even through the art on our walls, we showcase our ingredients, and people get the message of our values through waitstaff,” Schenk explains. “I write a dedication every week—a story or poem—for our website, and I write in the local paper about issues in contemporary American food.” When customers come to rely on Schenk’s expertise, they become loyal—then offer priceless word-of-mouth. Accordingly, his advice is straightforward: Tell your story. “Build a constructive relationship with the community and local schools, and be a resource for good food and health,” he advises. “People attach ideas to the word ‘flatbread,’ but if you’re making pizza, you’re already making flatbread!”