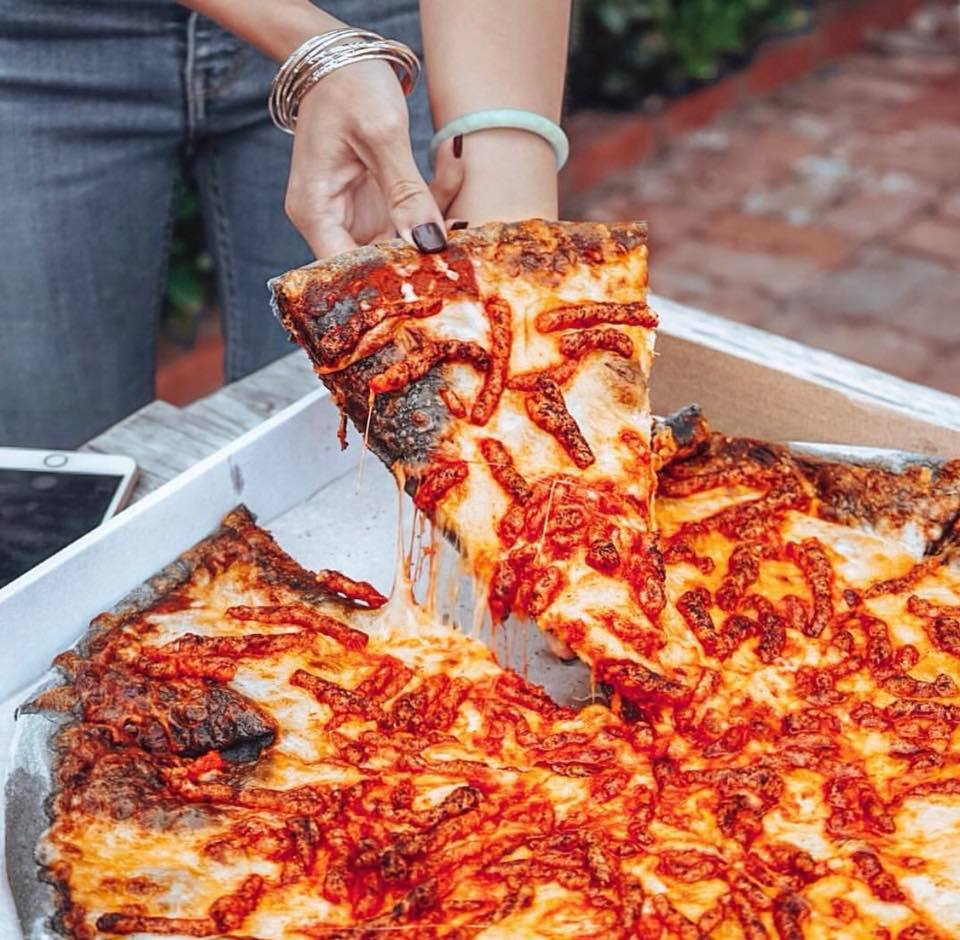 When it comes to pizza toppings, Cheetos are neat-o, especially when they pack some heat-o.

At Lelulo’s Pizzeria in Cape Coral, Florida, Lee Mazur was trying to create his own version of General Tso’s sauce. It came out a little more tangy and sweet than expected, but when he dipped a Flamin’ Hot Cheeto in the sauce, he knew he was onto something.

Weird pizza ideas: Grinders Pizza is where people go to get chili bombed

“I thought to myself, some chicken, some ranch, some cheese sauce, this could be really good,” Mazur told the News Press.

The Chicken Volcano Pizza features a layer of Cheez Whiz, the new sauce, grilled chicken breast, Parmesan and a blend of mozzarella, provolone and cheddar. Once it’s baked, Mazur tops it off with a handful of Flamin’ Hot Cheetos, a drizzle of ranch dressing and a little garlic-butter sauce along the crust.

To promote the Chicken Volcano and other oddball signature pies, such as the pickle-topped Picklesburgh Pie, Mazur created the hashtag #tastebudcertified, which means “over a hundred thousand taste buds have certified this pizza,” Mazur explains in the video.

To be fair, Lelulo’s doesn’t exactly have the Cheeto pizza market cornered. Other versions have sprouted up on menus around the country, including the Spicy Spooky Cheeto Pizza at Mickey’s Deli in Hermosa Beach, California. That pie, which debuted in October as a Halloween special, features black dough made with activated charcoal and a blend of mozzarella and cheddar. And Ameci Pizza Kitchen, a California chain, rolled out its own variation in 2016.

If the origin of Mazur’s Cheeto-topped pie sounds like a happy accident, you should hear the story of how Flamin’ Hot Cheetos came to be. According to Inc.com, they were invented by Richard Montanez, a Mexican janitor who worked at the Frito-Lay Rancho Cucamonga plant in California. When a batch of regular Cheetos failed to get the requisite dusting of cheese powder due to a malfunctioning assembly line machine, Montanez took the plain crisps home and sprinkled them with chili powder, creating his own version of a Mexican street snack called elote. They were so good, he passed the idea on to the corporate office. Invited to make a presentation to company executives, the marketing novice checked out a book on marketing from the local library and bought his first-ever tie for $3.