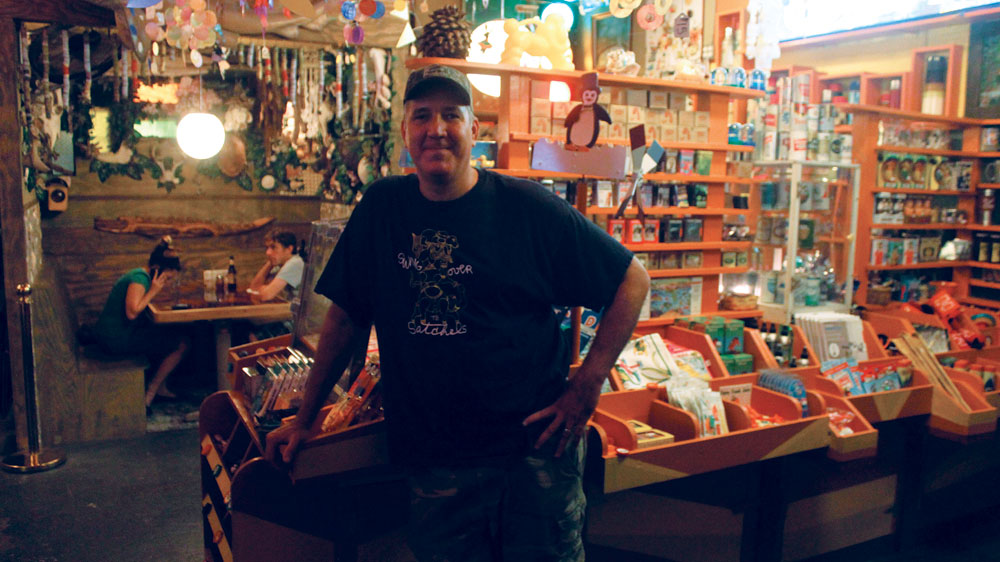 After a kitchen fire shut down Satchel’s Pizza in Gainesville, Florida, for several months in 2012, owner Satchel “Satch” Raye wasted little time getting the beloved pizzeria back in operation with help from a devoted local clientele. Less than five years later, another fire struck on Monday night, burning down the Lightnin’ Salvage souvenir shop adjoining the pizza operation's main building. And once again, Raye must rebuild.

The pizzeria itself, which was closed when Monday’s fire broke out around 9:22 p.m., was unharmed, and no one was in either building, so there were no injuries. Firefighters managed to keep the flames from spreading, but Lightnin’ Salvage was destroyed—and with it, a treasure trove of logoed merchandise that has helped make Satchel’s a household name in Gainesville. Raye, an artist and a sculptor, designed many of the items personally, including T-shirts, hats, coozies, bandanas, keychains and purses. The little shop also teemed with novelty items ranging from dancing hula girls and dashboard Jesuses to “bacon wallets” and zombie bobbleheads, as described in a PMQ cover story that ran in November 2012.

Gainesville’s fire department is still investigating the cause of the fire, according to local news reports.

After the 2012 fire, locals rallied behind Satchel’s and donated more than $37,000 (including $20,000 in 24 hours) to an indiegogo.com campaign to help Raye continue paying his employees while the pizzeria was being rebuilt. In a series of tweets after Monday’s fire, Raye said that he would rebuild Lightnin’ Salvage as well and praised the emergency responders who helped contain the fire.

In addition to the popularity of his pizza, Raye is well-known locally for paying all of his employees a living wage along with health benefits, retirement accounts and paid vacation. Here’s how we described his operation in the 2012 article:

When Raye isn’t transforming found materials—such as lost glasses and cameras, bicycle wheels, Happy Meal toys and garden hoses—into decorative mobiles, sculptures and displays, he and his pizza makers are creating individual works of edible art in Satchel’s squeaky-clean kitchen. Baked to artisanal perfection with a crispy, buttery crust and a dark-brown bottom, arrayed with colorful toppings ranging from artichoke hearts to zucchini, the pizzas at Satchel’s are the No. 1 draw, and customers may wait up to an hour and a half to get a bite. Some get grumpy and leave, of course, but most know the pizza is worth the wait. ‘We’re just busy,’ Raye says, with an unapologetic shrug. ‘One of the bumper stickers we give away says, “Sorry I’m late, I was at Satchel’s.” When you come here, you’ll be here for a while because we’re busy, and making good pizza takes time. But there’s a lot to do and plenty to look at while you’re waiting.”

All of us at PMQ extend our best wishes to Satch and look forward to visiting the next incarnation of Lightnin’ Salvage—and eating more of his delicious artisan pizza! Meanwhile, here's our exclusive video profile of Satchel's from November 2012: