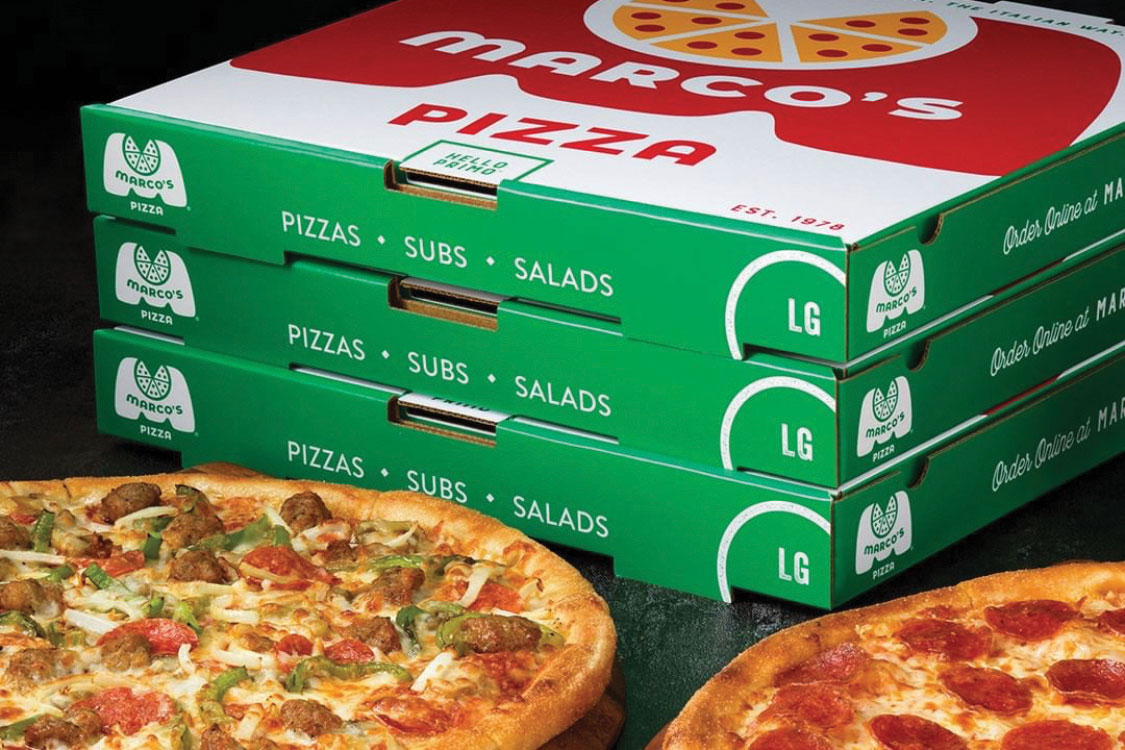 After logging more than $600 million in sales in 2019, Marco’s Pizza has seen its year-over-year numbers climb by about 20%.

Marco’s Looks to the Future

Same-store sales have soared during the pandemic for Marco’s Pizza, the No. 6 chain in the United States, but president and COO Tony Libardi knows there is plenty more work to be done. With 900-plus locations, Marco’s logged more than $600 million in system-wide sales in 2019 and has seen its year-over-year sales climb by about 20%. In a podcast interview with QSR magazine, Libardi said he’s more focused on preparing for a post-pandemic, high-tech future. He believes nervous customers will want to see increased automation in restaurants and fewer touch points that could result in viral contamination. “You remove all those touchpoints, all those contact points, which I think consumers are going to expect moving forward,” Libardi told QSR. “Simple things like doors—reaching out and grabbing a handle. Are automated doors in our future across every retail and restaurant establishment out there? All those points have to be considered and either removed and automated, or at least [operators must create] a perception of safety for the guests when they’re grabbing that door.” Marco’s is now developing an automated kitchen, with machines adding sauce and cheese to dough skins and even slicing and placing pepperoni on the pies. The company has also opened its first ghost kitchen in Los Angeles. The 250-square-foot facility will allow Marco’s to produce more delivery pizzas for a minimal investment.

Chuck E. Cheese’s parent company, CEC Entertainment, has filed for Chapter 11 bankruptcy protection, which the company blamed on the financial strain of mass closures due to the COVID-19 pandemic. According to a statement released by CEC, many of its kid-friendly stores will continue to operate as the company reorganizes under the supervision of a federal bankruptcy court. CEC, which also operates Peter Piper Pizza stores around the country, had reopened 266 restaurants by June 24—roughly half of its total number of 555 company-owned locations. The company will continue opening additional locations each week. “The Chapter 11 process will allow us to strengthen our financial structure as we recover from what has undoubtedly been the most challenging event in our company’s history and get back to the business of delivering memories, entertainment and pizzas for another 40 years and beyond,” said David McKillips, CEC’s chief executive officer.

How &Pizza Stayed Profitable in the Pandemic

&pizza has always played by its own rules, from the & symbol stamped on every piece of merch to its oblong-shaped pizzas and founder Michael Lastoria’s Old Testament-style beard. So when the COVID-19 pandemic struck this spring, the company, which has nearly 40 stores in five states and the D.C. area, reacted with predictable unpredictability. As many chains laid off workers, Lastoria raised wages across the board and guaranteed pay for all employees regardless of the number of hours they worked.

The result: &pizza was able to keep 85% of its stores open and 90% of its workforce on the payroll. Best of all? “We’re turning a fair amount of profit,” Lastoria said in a panel discussion for the Nation’s Restaurant News Restaurant Rise digital summit in June.

“For our brand, the most important thing we can do is grow out of this,” Lastoria explained in the panel discussion. “And to grow out of this, you need a workforce that feels appreciated and motivated and encouraged to show up and want to do the right thing and to want to help lift up this company.” Reducing employees’ stress during a difficult period builds loyalty that will pay off in the long run, he believes. “You’re not waiting for the federal government to step in and enact policy that helps support them. You’re the first one to say, ‘Hey, I’m going to invest in you, not just when times are good…but when times are very difficult.”

Lastoria took another bold step in late May as protests broke out nationwide over the killing of George Floyd by Minneapolis police. Even as some of the &pizza stores sustained damage, such as broken windows, from vandals during the protests, the company offered its employees three days of additional paid time off for “activism,” which could include participating in the protests. &pizza will also close its doors on Election Day so all employees can vote.

Lastoria admitted his approach won’t work for everyone. “That’s difficult when you have private equity investment,” he said. “A lot of companies…are dealing with the tension between the traditional mindset of ‘protect the balance sheet at all costs and let’s live to fight another day’ versus this notion of ‘Are we committed to our people? Are we going to continue to make the investments [in employees] when times are not necessarily good and when the ROI in the short term doesn’t necessarily [support it]?’ It’s extremely important from a cultural standpoint [to show] that you are willing to invest…when it’s not obvious to do so, and we’ve always done that.”