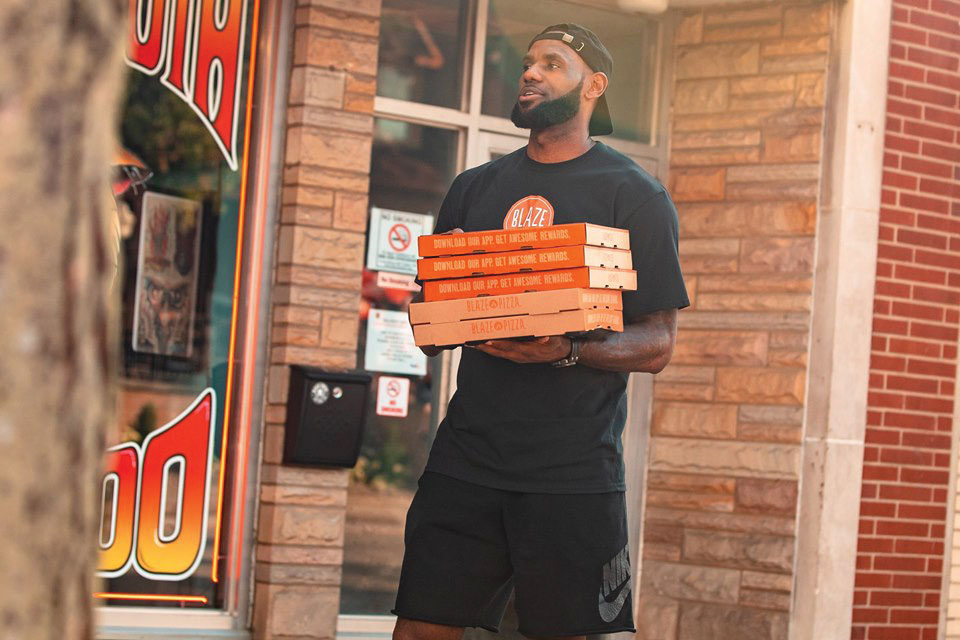 Once predominantly a dine-in concept, Blaze Pizza now offers delivery through DoorDash and Postmates and has LeBron James as a celebrity investor.

Rob Lynch worked miracles at underdog fast-food chain Arby’s when he came on board in 2013. Can he do the same for Papa John’s? The pizza company hired Lynch as its new CEO in August after Steve Ritchie, who replaced ousted founder John Schnatter, struggled for a year and a half to turn sales around. Lynch, who graduated from chief marketing officer to president of Arby’s in just two years, is viewed as a turnaround expert. He was the brains behind Arby’s “We Have the Meats” campaign and led the chain to 16 quarters of same-store sales growth as president. Meanwhile, Papa John’s has worked to turn its flagging sales around with several initiatives, including investing an additional $80 million to help franchises with marketing and cutting their royalties and foodservice pricing.

Fast-casual chain Pieology, headquartered in Rancho Santa Margarita, California, pushed fans to its new Pie Life Rewards app during National Pizza Month with the Scan, Score and More Sweepstakes promotion. To enter, customers had to download the app, sign up, and check in at a local Pieology store. Every location offered a grand prize of free pizza for a year, plus instant wins every day that included tickets to local movie theaters and Six Flags theme parks. Throughout the monthlong promo, Pie Life Rewards members earned between 10 and 100 reward points every time they checked in at a participating Pieology location.

Will Domino’s Go Down in a “Blaze” of Glory?

It’s a David-and-Goliath story set in a modern-day pizza shop: Rick Wetzel, co-founder of fast-casual up-and-comer Blaze Pizza, says he’s gunning for Domino’s, the No. 1 pizza chain in the country. And Pizza Hut and Papa John’s had better watch out, too. “I’m chomping at the bit,” Wetzel told Restaurant Business’ podcast, A Deeper Dive, in late August. “I’m ready to go head-to-head. I’m ready.” He confirmed his plan in early September, telling Yahoo Finance’s Brian Sozzi, “We are ready to take on Domino’s, yes.”

Headquartered in Pasadena, California, Blaze has more than 300 restaurants in 42 states and five countries, with sales at around $326 million in 2018. That’s chump change compared to Domino’s gigantic footprint, with $3.4 billion in sales at more than 15,000 stores around the globe. But research firm Technomic hailed Blaze as “the fastest-growing restaurant chain ever” in 2017, and NBA superstar LeBron James is a key investor. Wetzel also seems to have the people on his side. A large-scale consumer study by Market Force Information earlier this year found that Blaze is America’s favorite quickservice pizza chain, easily besting Domino’s (No. 4), Papa John’s (No. 5) and Pizza Hut (No. 6). (Papa Murphy’s came in at a close No. 2, followed by Marco’s Pizza at No. 3.)

Part of Wetzel’s strategy to overtake Domino’s involves smaller or rural markets with lower-income populations. All in all, Blaze reportedly plans to open 50 restaurants by the end of this year. Originally focused on creating dine-in experiences, the company has added larger family-sized pies to the menu, incorporated mobile ordering, and partnered with DoorDash and Postmates for delivery. “We’re leaning in hard,” Wetzel told Restaurant Business. “I think there is a huge opportunity to go at Domino’s in particular, [whose] core benefit is convenience, not quality of food. I think there are a lot of people out there who care about fresher, healthier, more artisanal food. And I think we’re going to be real successful in that. We’re gonna go right at ’em. And I’m thrilled to do it.”