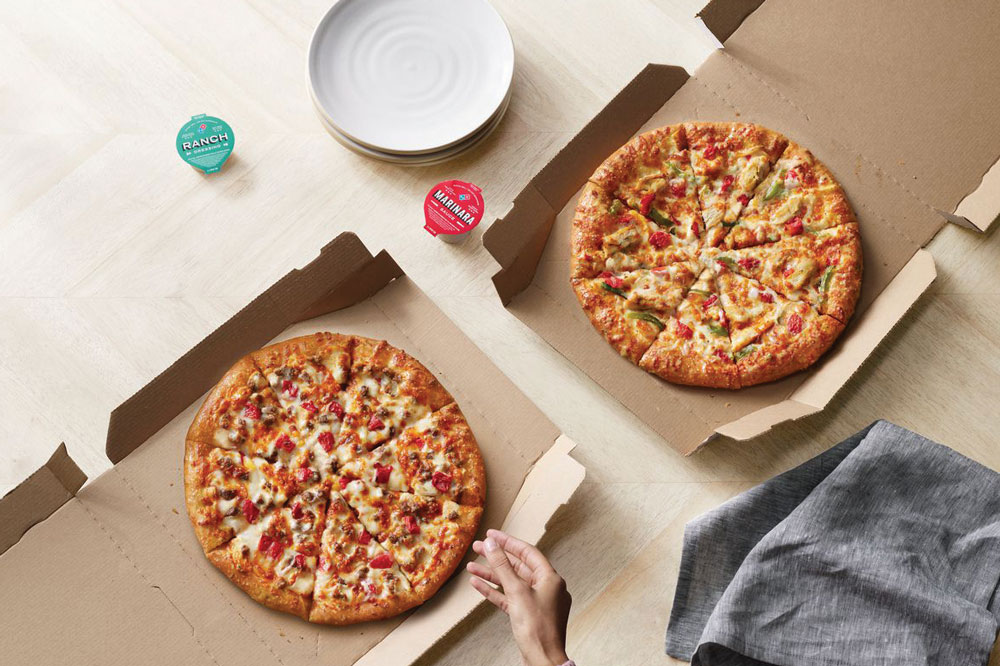 When consumers get tired of ordering pizza (hard to imagine, but it happens), they often go for tacos or burgers instead. But those items usually don’t deliver well, which has become a crucial factor in the age of COVID-19. Domino’s claims to have solved that problem with a pair of new specialty menu additions: the chicken taco pizza and the cheeseburger pizza. Priced at $11.99, both pies were designed with delivery in mind. The chicken taco pizza features American cheese, taco seasoning, grilled chicken, onions, green peppers, diced tomatoes, provolone and cheddar cheese. The cheeseburger pizza boasts a ketchup-mustard sauce, American cheese, beef, onions, diced tomatoes, shredded provolone and cheddar cheese. “Now, friends and family who are craving a taco or cheeseburger on pizza night won’t be disappointed,” said Art D’Elia, Domino’s executive vice president and chief marketing officer. “Domino’s new taco and cheeseburger pizza are sure to satisfy everyone.”

Pizza Hut doubled down on value in August with the introduction of the Double It Box, which offers two medium-size pizzas in the same box. The Plano, Texas-based chain debuted the offering with two medium one-topping pizzas for $12.99, equating to less than $1 per slice. Customers can also order a Double It Box special with a one-topping pizza and a specialty pizza for $15.99, or two specialty pizzas for $18.99. The company said the new promotion helps families, office colleagues and roommates resolve their arguments about which toppings to order on their delivery or carryout pizzas. “We get it—the whole family is home now more than usual, trying to navigate the new normal,” said Pizza Hut chief marketing officer George Felix. “Even when you decide that it’s pizza night, the negotiations on toppings can be fierce. With the new Double It Box, there’s no compromise needed—a pizza for the kids and a pizza for the parents, so everyone at the table has the power to choose the topping they want for less than one dollar a slice.”

Survey: The No. 1 Preferred Pizza Provider

Domino’s might be the largest pizza chain, but customers in nearly half of all U.S. states would rather get their delivery/carryout pies from Little Caesars, according to an August study conducted by international market research firm TOP. “Since the spread of COVID-19 on U.S. shores began in mid-March, Little Caesars has been the preferred provider for residents in 24 states,” the TOP Data Pizza Report survey found. “No other pizza place comes close, with Papa John’s leading the way in just nine states and Domino’s in seven.”

TOP is a global network of 12 data-driven marketing agencies specializing in different fields. The company’s study found that overall visits to pizza chains have declined by 20% since the pandemic began, including a 6% drop for the Detroit-based Little Caesars.

But Little Caesars’ emphasis on value—including its standard $5 Hot-N-Ready pies—still has strong appeal for consumers struggling to make ends meet in the COVID-19 crisis. The company has focused on menu innovation over the past two years as well. In addition to a plant-based Impossible Supreme Pizza (featuring meatless sausage from Impossible Foods) launched in 2019, Little Caesars introduced a unique limited-time menu item, called Slices-N-Stix, in August. It’s a combination of four pepperoni slices and eight cheese breadsticks in a single pie, sold for $6.

As part of its enhanced business model, Little Caesars began offering delivery via DoorDash in January and last year added contactless pickup in stores around the country. The chain’s Pizza Portal is a method in which customers can place orders online and retrieve their pies from a kiosk with heated compartments, eliminating the need to interact with employees.

“The cost-effective approach to dining, partnered with minimal human interaction, has been at the top of a lot of American menus this year, and the results from our pizza report indicate that little has changed recently,” TOP said in a summary of its survey.