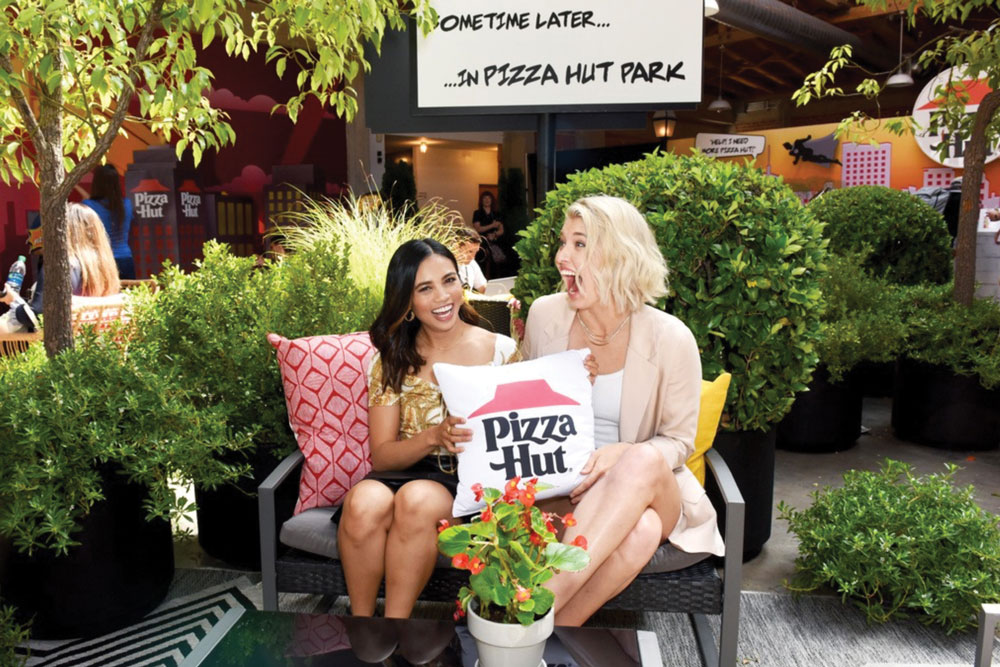 Louriza Tronco and Sarah Grey of The Order

Pizza Hut wants to be cool again—as in Comic-Con cool, which in bygone days wasn’t cool at all but is now super-duper-cool (which is a really cool way of saying “cool”…we think?). Stuck at No. 2 behind Domino’s, Pizza Hut has been playing catch-up this year by inserting itself into pop-culture moments and conversations, from snatching an NFL sponsorship deal away from Papa John’s to sending free pies to Jimmy Fallon and getting a shout-out in his monologue on The Tonight Show.

The Pizza Hut Lounge at Comic-Con, held July 18 to 21 in San Diego, was certainly a step in the right direction. It attracted celebrities like K.J. Apa and Cole Sprouse (a.k.a. Archie and Jughead) of Riverdale, New Girl’s Jake Johnson, and The Walking Dead’s Norman Reedus for slices and highly Instagrammable pics. Meanwhile, the chain announced plans to close as many as 500 of its older dine-in locations and focus more on carryout and delivery—definitely an on-trend move made with millennials in mind. “We are leaning in to accelerate the transition of our Pizza Hut U.S. asset base to truly modern delivery/carryout assets,” Yum! Brands president/CEO David Gibbs told investors in an August 1 earnings call. “This will ultimately strengthen the Pizza Hut business in the U.S. and set it up for faster long-term growth.” And maybe Archie could deliver pies in his jalopy?

When you deliver pizza in high-traffic areas with limited parking, two wheels can be better than four. That’s why Domino’s franchisees now have the option to provide custom electric bicycles, or e-bikes, to their delivery staff. After testing the bikes at corporate-owned stores in Houston, Miami and New York, the locations saw improvements in overall delivery and service. “They also experienced labor benefits, as the stores were able to hire from a wider pool of candidates, including those who might not have a car or driver’s license,” adds Domino’s executive Tom Curtis. The company will roll out hundreds of e-bikes at corporate-owned units in Miami, Salt Lake City, Baltimore and Houston later this year.

“E-bikes make a huge difference in my stores,” reports Greg Keller, a Domino’s franchisee in Seattle. “While delivery on a traditional bike solved many of our traffic and parking issues, the hills in Seattle were tough on even our best cyclists. E-bikes were a game changer for us…we have been able to save money, provide better service, increase hiring and maintain a happy workforce.”

With stores in 35 states, Marco’s Pizza launched its first nationwide advertising campaign this year and expects to open its 1,000th store by the end of 2019. Tony Libardi, the company’s president, told Nation’s Restaurant News the company will focus on both corporate stores and multiunit franchisees, and Denver, Nashville and Virginia are markets of special interest. But one of his biggest challenges is retaining employees. “Whoever figures out how to best acquire and keep talent over the next decade will win the day,” Libardi said. “You have to be laser-focused on your team, creating opportunities for them to grow their own career and keeping them satisfied.”