Just about every pizzeria offers several sizes of pizza—14-inch, 16-inch, 18-inch, etc. You’ve heard about others offering even larger pizzas.

I mean LARGE pizzas—starting in the range of 29 inches and increasing from there. But how do you go about adding it to your menu? Some of the things you’ll need are completely material, such as special pans, extra large boxes to transport them in and more ingredients per pizza to make them. However, some of the things you’ll need are more skill-based; it takes skill to create a pizza that large. If you hand toss it, you have to figure out the special skills involved. You’ll have to train at least a few of your staff how to do it. The bake time will be different and you may even have to alter your recipe a little to get the best taste possible. And don’t forget about the skill actually needed to get it out of the oven without dropping it. Altogether, adding an extra large pizza to your menu can be tricky without being pointed in the right direction. 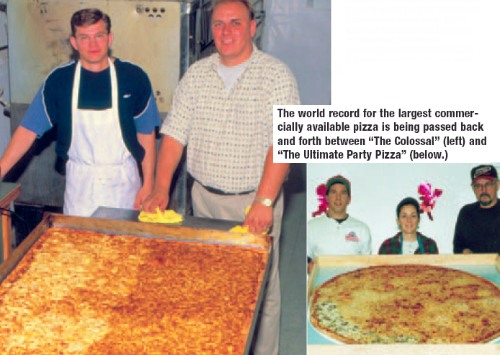 To get in the correct mindset for large pizzas, the largest pizza ever made (according to the Guinness Book of World Records) was in Norwood, South Africa on December 8, 1990. Made from 9,920 pounds of flour, 3,968 pounds of cheese and 1,984 pounds of sauce, the pizza’s diameter stretched a record-breaking 122 feet and eight inches, breaking a previous record by 11.5 feet.

The Colossal and The Ultimate Party Pizza

Another world record is being passed back and forth by two pizzerias called The Original Brooks Pizza 2-for-1 Ltd, owned by Jeff Parker and Paul Revere’s Pizza, owned by Joe and Patty Keagle. The record for the largest commercially available pizza is between Brook’s “The Colossal” and Paul Revere’s Pizza’s the Ultimate Party Pizza.” The Colossal is three feet by four feet and provides 12 square feet of pizza for the bargain price of $134.95. They also offer something a bit smaller, called the “mini-Colossal” which is only six square feet for $69.95. (Check out the articles about the Colossal and the Ultimate Party Pizza at www.pmq.com/mag/2001fall/record.shtml and www.pmq.com/colossal_pizza.shtml.)

For those who aren’t really interested in breaking the record, but just want to offer an extra large pizza, something like the King Kong Pizza, sold by Pizza Express in Glen Burnie, Maryland, might be what you want. Pizza Express offers a 29-inch hand-tossed pizza as a regular delivery option.

Pizza Express has offered the King Kong pizza for nine years now. Mohsen told me that it’s very popular at parties. “If someone orders it for a birthday, we usually put the birthday person’s age on top using the toppings,” Mohsen said. “The kids just love it—it’s something they’ve never seen before.”

The pizza sells at $22.99, but costs $11 to make. To prepare it, they combine three of the regular-sized large dough balls (about 60 ounces all together). The toppings come out to about the same as is on three extra large pizzas with a total of 16 ounces of sauce and 24 ounces of cheese. Once cut, the King Kong Pizza produces 61 slices and feeds eight to ten people. They’ve geared it to businesses and big parties with the guarantee that it won’t take more than 20 minutes.

Mohsen told me that they market it using fliers and advertisements in the paper under the slogan of, “We have the largest pizza in Glen Burnie.” The ads all feature a picture of the real King Kong and the pizza. “One of the best selling points about the King Kong Pizza is that people see it and want one of their own,” Mohsen said. Only the two managers and Mohsen know how to make the pizza.

How do they get the King Kong from the pizzeria to someone’s front door in the first place? “The biggest problem with offering a pizza that big is getting it to the customer,” Mohsen says. The only way to transport it is to empty out someone’s trunk and carrying it in there. This is also true for any customers that might come to pick it up: they have to carry it in their trunk as well.” Pizza Express has a 50-cent delivery charge on every order, including the King Kong Pizza.

According to Mohsen, Pizza Express generally sells two of the King Kong Pizzas a day. Pizza Express doesn’t require a special length of time to make a King Kong. They just make them, but other pizza production stops until they’re done. 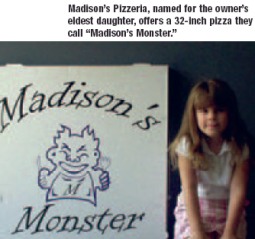 Madison’s Pizzeria, a five-store chain owned by Chuck Darrah in Pittsburgh, Pennsylvania, has a 32-inch pizza they call “Madison’s Monster.”  Sold for $25.29, Madison’s Monster is a round pizza that costs about $14.42 to make, using six pounds of dough, two liters of sauce and three pounds of cheese. “It’s really popular with larger groups,” Chuck told me. “It feeds eight to twelve people.” The Madison’s chain sells about 35 of the large pizzas a month; however, no matter how popular it is now, Chuck told me that they had to advertise it pretty heavily when they first started.”

To advertise Madison’s Monster, Chuck stuffs all bags and boxes with specifications on it (things like it has 125 pepperonis) and a $5-off coupon.  Chuck decided to offer the large pizza after a friend encouraged him to give it a try. “One of our suppliers, Neil Lewis of Lewis Brothers Restaurant Equipment, gave us the idea to try a really big pizza,” Chuck said. “I didn’t have a problem with trying it, but I wanted it to be round, so Neil found where we could special order the screens in the size we wanted.”

They originally used pizza screens but quickly found that the screens weren’t sturdy enough. “We needed two peels and two people just to get the pizza in the oven,” Chuck told me. “Now we use a disk which is a good deal more sturdy.” When they first received the screens Chuck told me that he made a couple of Madison’s Monsters for each screen to keep them from sticking when the screens were really needed. “That was, to say the least, an interesting night,” Chuck told me. “We all had to get used to stretching that much dough and handling that much pizza.”

Nor were the screens the only change in how they handled Madison’s Monster. The food cost of $14.42 includes the cost of the box. The box they use now is plain white and comes from Nappie’s Food Service in Pennsylvania. They originally used a white box with a picture of Madison printed on the front. “The printing was too expensive,” Chuck said. “So we went with just the plain white box.”

John Crow, president of Lloyd Industries, told me a little bit about what you will need material-wise to make extra large pizzas. “You’ll need a specially-made pan, disk or screen, as well as a delivery bag to hold it,” John said. “Since most people don’t use these pans as much as their regular ones, they hold up lots better.” By special ordering larger pans you get larger prices. For example, for a 36-inch disk, you pay $75. The bag is a bit more expensive. For an average size bag from Lloyd Industries, you pay $80 apiece. For a specially made one to carry your extra large pizza, you’ll pay closer to $100 per bag.

John also offered some advice to keep in mind when shopping for equipment to make the pizza. “Screens wouldn’t work very well because they’d just be flimsy at that size, while the pizza would be hard to get out of a pan with a rim,” John told me. “I’d recommend going for a disk—it’s sturdy enough that you wouldn’t have to worry too much about dropping the pizza because of a pan malfunction.”

Big Dave Ostrander of Big Dave Ostrander Consulting gave me some pros and cons of offering an extra-large pizza. “If you do offer something that big, then you have the marketing benefit of being able to advertise that you have the biggest pizza in town,” Big Dave said. “The gross profit on something like that is large as well, but you have to have portion control. It might cost you $6 to $7 to make, but if you sell it for $20, you make a lot of money on that one pizza.”

However, Big Dave also felt that offering an extra large pizza isn’t the best thing you could do for several reasons. First, your customers will be shocked when they realize how truly big the pizza they bought is. He told me that they just can’t realize how big a 25-inch pizza is, even if you try to tell them with graphics and other educational materials. Second, it takes up a lot of valuable oven space. In a deck oven, you might only be able to cook two or three at a time and you pretty much have to stop baking smaller sized pizzas until you get those out of the door. Third, transporting them is hard. You’ll have to special order the boxes and delivery bags. Once you have those, you have to figure out how to carry it in your delivery car and then through the front door of the house. “All things considered, I wouldn’t offer it,” Big Dave told me. “The troubles to get it out of the door make it hardly worth the time and effort.”

Whether or not you decide it’s worth the time and effort to offer a large pizza, be sure to take into consideration everything about the pizza. Yes, to offer large pizzas means large profit margins and bragging rights—but you still have to sell enough of them to pay your staff to make them and to pay for the special equipment you’d need to make them.